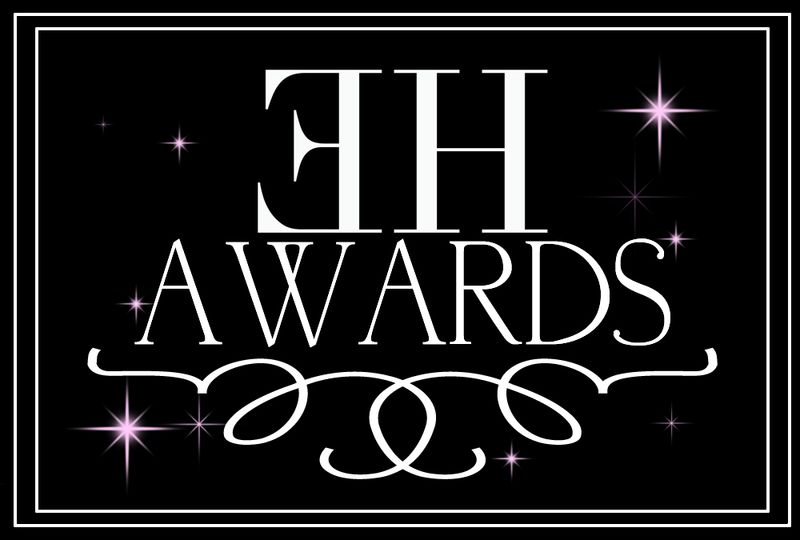 To mark the magazine’s second birthday in June, we introduced our first ever awards: The ƎH Awards.

As we approached this latest landmark, it seemed fitting to ask our readers what they liked about the magazine.

In fact we wanted to know what was their favourite EVERYTHING! 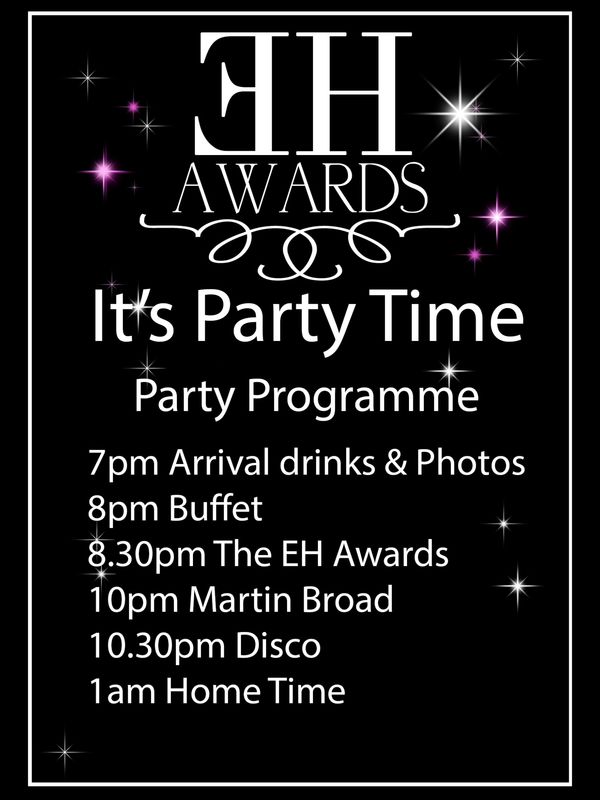 The votes were counted, verified and placed in secret envelopes, to be opened at our first ever ƎH Awards ceremony, at The Hyst, Swansea on Saturday 24th June.

All the nominees, their partners, plus #TeamHeaven were invited to this glamorous event - along with a FULL party programme. Dresscode: Dress Like You’re Already Famous!

The press boards and red carpet were ready and waiting for the guests, who were greeted with bubbles on arrival!

Once they had their ƎH welcome photo taken, they were - with little to no encouragement - invited to explore the bar or the cocktail hut which housed two lethal cocktails: Bitch & Not A Bitch! One was virginal white, complete with fluffy marshmallow, ice cream, vodka, prosecco and edible confetti. The other was a devilish red with a tingling sharp jelly, vodka, raspberry puree and spacedust! No prizes for guessing which one was which!

Guests were not only well ‘watered’ on the night. They enjoyed a magnificent mouth-watering buffet prepared by the fantastic team at The Hyst. And as it’s the law for cake to be served at a birthday party, we were spoilt for choice with so many different flavoured, bite size cupcakes by The Raspberry Cakery, which were topped off with the ƎH logo, just in case anyone forgot whose birthday it was!! You can see more of these bite-sized beauties in this month’s Feed Me column.

The tables were decorated by Rianon Jones of RiCreations who made hot air balloon centre pieces, filling the baskets with little boxes of ƎH sweet treats.

Once everyone had settled down, it was time for the main event. I welcome you to our first ever ƎH Awards… 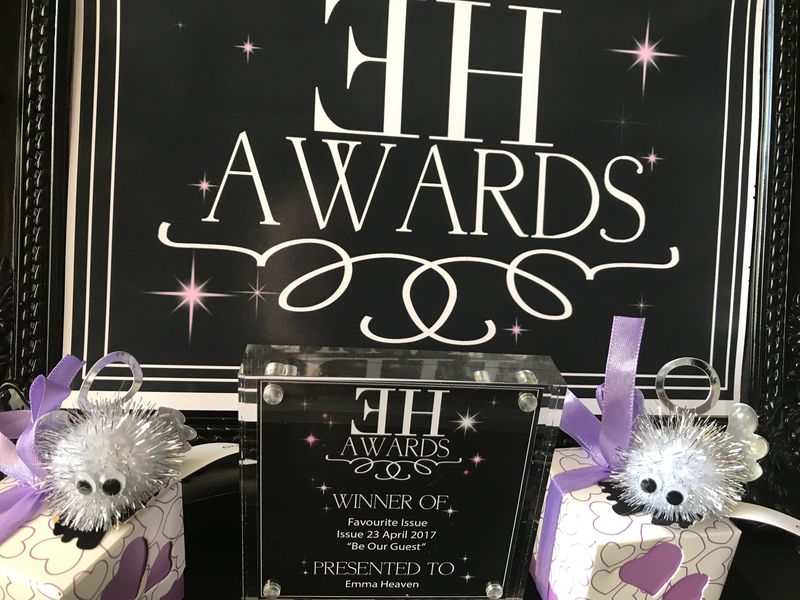 To help me present the awards was my lovely nephew Alfie Heaven. 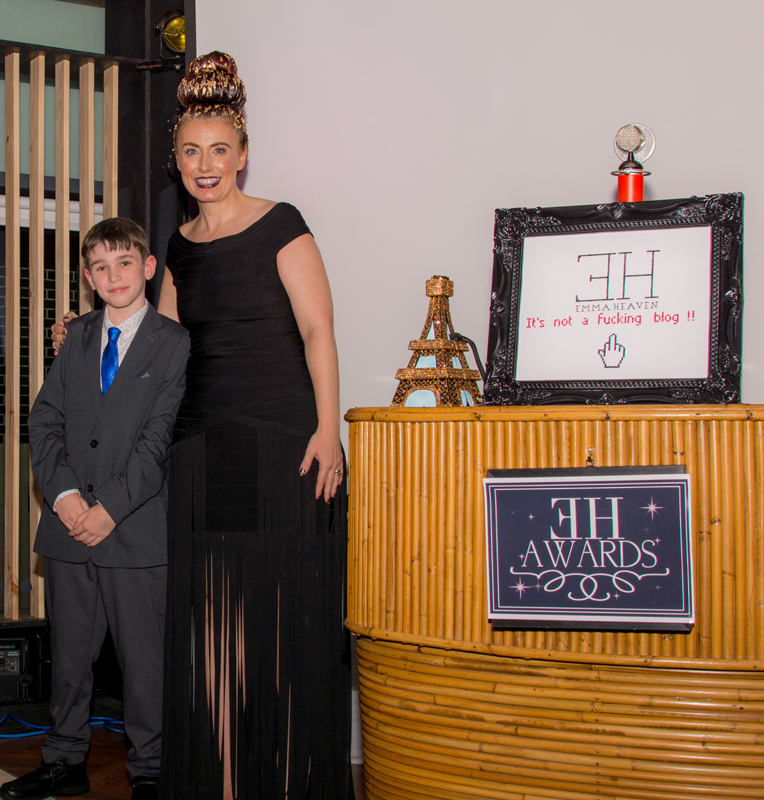 And the winners are:

The final ƎH award goes to our competition winner. Every reader who voted in all categories was entered into a draw to become our ƎH ‘Favourite Reader’, winning their very own award and a goodie bag from #TeamHeaven.

And the winner of the ƎH ‘Favourite Reader’ award goes to:

Congratulations Bev. We will be in touch soon to arrange delivery of your prize.

A huge thank you to everyone who voted. It was great to see which columnists and features were your favourites. The feedback has been invaluable.

Well done to all our nominees and a special well done to all our winners. Even Cross Stitch Bitch, who tried ever so hard to keep her winning speech clean! No need to call Childline or worry about young Alfie hearing such naughtiness - I placed sound cancelling headphones on him for her section!

It was a thrill to see all of #TeamHeaven being rewarded for their hard work and dedication to the magazine. They so deserve it!

With the awards over it was time to party. And a special shout out to my wonderful guests who made it a night to remember:

As soon as singer Martin Broad took to the stage, everyone joined in and danced the night away.

Martin had a playlist handpicked by me. Every song had a special meaning to me and/or has at one time, featured in the magazine.

All Over The World - ELO
It’s All About You - McFly
Daydream Believer - The Monkeys
Greatest Day - Take That
Things Can Only Get Better - D:Ream
Hall Of Fame - The Script featuring will.i.am
Hold Up A Light - Take That
Happy Birthday - Stevie Wonder

After singing a fabulous set it was time for Martin to ‘lubricate his vocal chords’ and the cue for DJ Daniel David to keep us entertained with his dancefloor fillers until hometime!

I want to say a huge, heartfelt thank you to everyone who joined me to celebrate the magazine’s second birthday and to everyone involved in putting this amazing event on.

It really was one of the greatest days of my life. On this note, I shall leave you with a small montage of the evening. Please note that Cross Stitch Bitch has been pixelated out to preserve her anonymity!

Ladies and gentlemen, I give you the ƎH Awards 2017…