My darling ravishing readers, one is currently at home, recovering from frostbite and hypothermia. But worry not, Mummy is on hand with hot water bottles, warm fluffy blankets and lashings of hot toddies to defrost this frozen bird!

Of course Daddy has had to put in his two penn’orth, ever so eloquently barking for all to hear, “Get a bloody grip woman, you’ve only come back from Blackpool not the bloody Arctic! And you might want to dress more appropriately and wear some bloody thermals - that would save us all from this bloody namby pamby pandering and mollycoddling. Bloody women, no bloody idea and even less bloody sense!”

Well thank you Daddy for those kind words of encouragement, however, in one’s defence the north had endured sub-zero temperatures AND Storm Arwen, so one is NOT being overly dramatic. Ok then, maybe a tad, however, one does enjoy all the attention that Mummy bestows upon me when one is under the weather. Having been brought up by an unsteady stream of nannies, one’s desire for some maternal attention is rarely ever quenched! Anyway, enough navel gazing…

As I sit in front of a roaring open fire with yet another large hot toddy, I reflect upon what was the most exhilarating weekend away one has had in quite a long time.

When the itinerary came through from EH HQ, you’ll be pleased to know that although one did shudder slightly at the mention of Blackpool, one has learned that you should never judge a book by its cover, so one has put her trust in those darling gals at EH HQ and decided to shut up and soldier on. No more tantrums, no more tears…it’s time for Dita to put on her big girl pants! 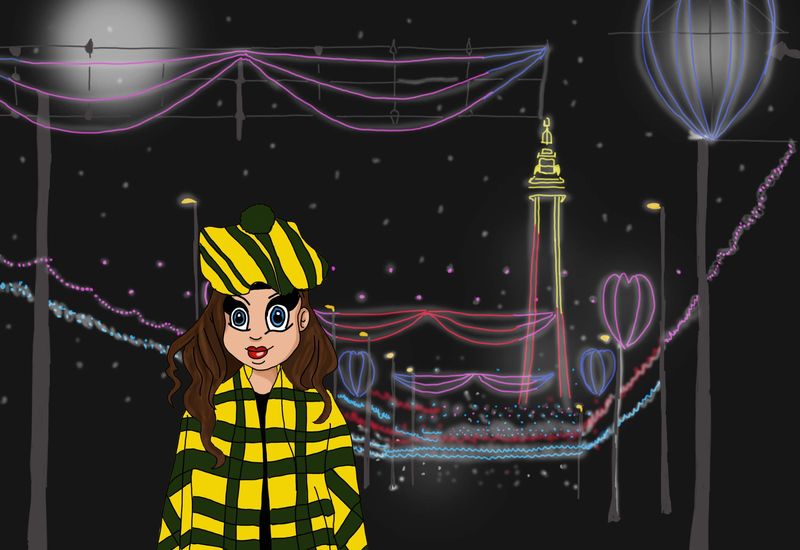 Oh how I so wish that they had been thermal ones tho, however, we’ve all seen Bridget Jones, and no matter how much Hugh ‘Hello Mummy’ Grant said he loved them, we all know he’s an actor who’s paid to say that. In reality, there can’t be anybody on Earth who would prefer to unravel some big knickers rather than a pair of Agent Provocateur's best!

Off to Blackpool I went to see its illuminations and - one was reliably informed - its ‘Pleasure Beach’! Oooh, I must confess that I was more than a little intrigued AND aroused by this prospect as it’s been a while since I had a sandy bottom, so to speak…

Alas, all my fruity thoughts of getting down, frisky and sandy were swiftly banished! One was more than a little shocked (and disappointed) to find that it was a theme park, albeit with some intriguingly named rides!!

It seems the only remote pleasure one would get around there would be high-pitched screaming, and NOT in a good way. However, when in Rome so to speak…

So one dug deep, and toyed with tossing a coin as to whether one should take on The Big One or the Big Dipper… Now we all know that size does matter; plus there’s that famous saying ‘go big or go home’! Well my darlings they weren’t just big in name, they were absolutely enormous!

I would be hard pressed to say whether I favoured the Big Dipper or The Big One - they both gave me the ride of my life - frantic, bumpy, up and down, rattling through the bends and curves, leaving one’s head spinning and one’s body battered!

I can’t remember the last time my teeth clattered and legs trembled so much! Well actually I can, but I wasn’t alone, and I am the soul of discretion. Suffice to say, it was an exhilarating experience that one might be tempted to try again, tho preferably with someone strong and strapping to grab hold of to soothe my laboured breathing…

After an afternoon of thrill-seeking on various rides it was time to regroup and refortify the body with fuel ready to take on that evening’s activities. Uncharacteristically, instead of going off the rails, I decided to stay on them, and hopped on one of the trams to take in some of Blackpool’s sights, including their three prominent piers - everything in Blackpool seems to be so much larger and extreme than the average! Along with the famous Blackpool Tower which was on the next day’s visiting list.

One was fleetingly tempted to visit Madame Tussauds, however, with no ginger prince in situ to drool over, one didn’t see the point. And I will have my hands full enough as it is over Christmas, socialising with my own lifeless waxworks, aka my extended family!!

Back at one’s hotel there was time for a bath to thaw out one’s freezing bones, and a quick brandy for the nerves, before heading back out to Blackpool’s nightlife. Really, didn’t anyone at EH HQ think to tell me just how cold it would be? One could have prepared for this trip by a few visits to a cryo chamber, which are apparently beneficial for recharging the body!

On the way to the restaurant one got to see the illuminations in all their glory. There were twinkly lights aplenty, as far as the eye could see, and even the tram was ablaze with multi-coloured lights. I dread to see their electric bill, what with energy prices going through the roof. Perhaps Daddy will think twice about yelling at me to turn lights off at home after I’ve shown him Blackpool’s coruscating charms! He will be agog at the thought of how much it costs to keep those lights burning bright into the night.

One dined at The Bank Bar & Grill, popular for its range of cocktails and extensive gin bar! Then it was on to see The Funny Girls, an iconic, witty and colourful drag show - cabaret at its absolute best and a thoroughly entertaining evening, which reminds me, I must set up an evening out with the delightful Olivia Hell, now what a night that would be - two fabulous gals on the town, looking for fun, frolics and fellas…what could possibly go wrong?!

Back to Blackpool and the final day. One was ready and primed to ride its infamous tower to the top… The ascent wasn’t particularly rapid nor smooth but it didn’t spoil one’s enjoyment, and when one arrived at the final destination the mild discomfort was most definitely worth it. There were stunning views in every direction, including the famous Blackpool Promenade.

One’s ‘big girl knickers’ were especially useful on this occasion when one dared to walk out on the glass viewing platform, which is not for the faint-hearted; thankfully one had had a few brandies for Dutch courage before leaving the hotel and they had the desired effect, although I’m not sure if it was the brandy or the knickers which helped keep one's body insulated to brave the platform AND the biting wind.

One had a quick peek at the Tower’s famous ballroom with its famously large Wurlitzer organ. I had hoped to see the professional dancers from Strictly Come Dancing, as I have a bit of a crush on one or two of them - and I do so love a good foxtrot - but thanks to the pandemic, Blackpool is strictly off limits to them this year, so I’ll just have to pull a few strings to wangle some tour tickets with a discreet meet and greet thrown in…

It was swiftly on to The Blackpool Tower Dungeon with its amazing cast of theatrical actors, special effects, stages, scenes and rides. Not quite what one was expecting from a dungeon! Then again, my previous experience of dungeons entails an exclusive members-only guestlist, last minute directions arriving via courier, masks, a strict dress code, and a complicated non-disclosure agreement which has to be vetted by lawyers, lest Daddy throw an almighty fit. Again!

So that my ravishing readers, was one’s experience of Blackpool. No romance (despite my ‘Kiss me quick, squeeze me slowly’ hat), but still awash with spills and thrills, illuminated by a fabulous display of dazzling lights. It was time to haul one’s chilled carcass back home, for some serious TLC. Thankfully one had had the good sense to block book the masseuse for the next few weeks, purchase an infrared sauna, the warmest cashmere lounge suits Harrods had to offer, and strict instructions to my wonderful, loyal maid and partner in crime, Maria to ‘liberate’ as much brandy from Daddy’s study as she possible could!

Well that’s it my darling readers, one is now preparing one’s body, mind and soul in readiness for the forthcoming festive season, but rest assured I will reveal all the intimate details with you in next month’s column. For now tho, I am wrapped up like the proverbial pig in a blanket, and giving cook a helping hand with his famous sausage meat stuffing.

Festive greetings to one and all.

On my strolls along the Blackpool promenade, this Ice Maiden noticed several groups of mad/brave souls, dipping their toes and other extremities in the sea. I have since discovered there is a growing ‘movement’ of these cold water ‘dippers’.

Perhaps if you are to send me off to such chilly climes again, I think you need to share in my sub-zero experiences. You are very welcome to join me for a dip at the lake on our estate to acclimatise. See you lakeside, Christmas Day. 7am sharp. I’ll bring the brandy!

And if you can’t wait for our Christmas Day dip, look up your nearest ‘BlueTit Group’, and get dipping! Even boys - aka Bluebells - are welcome to join in with the icy shenanigans!