Greetings my ravishing readers, well where does one start?

I suppose the beginning is probably as good a place as any, although I’m rather ashamed to confess that it did involve not a teeny tiny tantrum, but an epic and most unladylike rant.

However, in one’s defence I did rally quickly, apologised profusely, and sent out the usual grovelling Harrods gift hampers, which I now seem to be eligible to have on a subscription basis, along with a preferential discount… Ooops!

Well come on, I mean what else is a gal to do when she finds out that her wings have been seriously clipped and she’s not flying off to an(other) exotic location?!

Nope. For this latest assignment, I was being ‘banished’ to Scotland, all because of some virus or other, which I did point out to the gals in HQ that I don’t drink Corona lager so I’ve got zero chance of catching it! 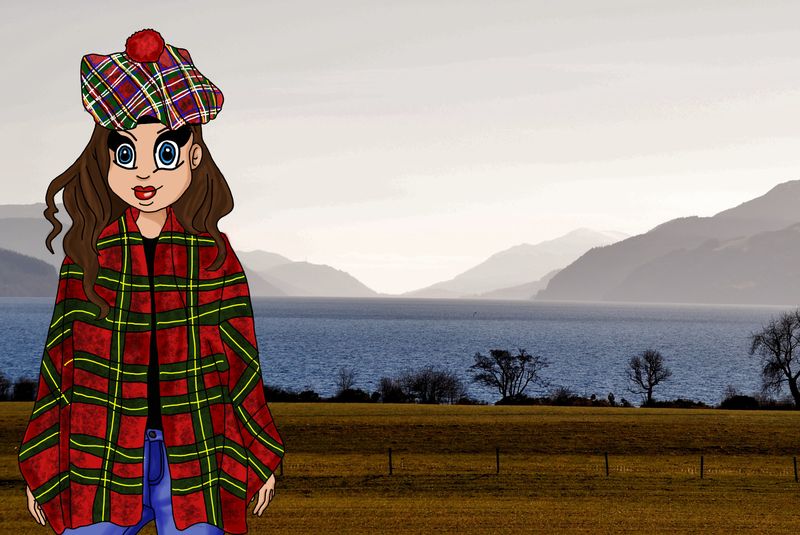 Well that was the advice our family had been following, thanks to our long-standing friend and family doctor. Although Mummy did say that he’d been struck off some time ago for being a bit ‘handsy’ and unorthodox in his treatments. But that doesn’t seem to have put her off, nor stopped her from seeing him for her weekly gynae appointments…

One's spirits and hopes were swiftly lifted on discovering that my beloved ginger prince would also be in the vicinity, so you can imagine, one was packed, preened and perched on the first available train to north of the border, in search of my (unrequited) love. And the Loch Ness Monster.

My first stop was in Edinburgh, heading straight to the hotel which my secret source had confidently confirmed the famous red head was staying. Alas it turned out to be some minor reality tv celebrity whose name escapes me, who proceeded to bore the pants off anyone daft enough to engage in conversation. Fake personality and fake hair come to that.

I must remember to ask my source to refund me their ‘finder’s fee’, as it was an atrociously bad lead, and no amount of single malt has been able to wash away the taste of bitter disappointment...

To add insult to injury my darling ginger had been and gone, so I was left bereft with only a bottle (or two) of GlenMorangie to keep me company while I did a little research on the famous Loch Ness Monster. 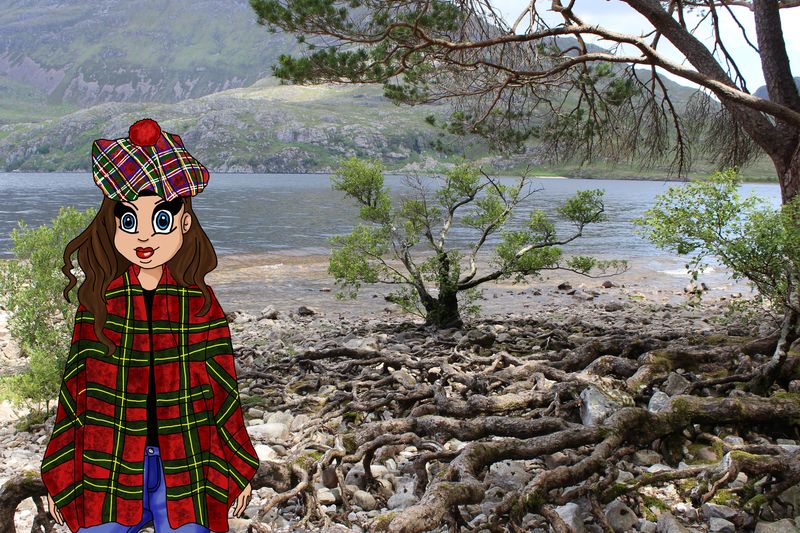 According to Scottish folklore, the Loch Ness Monster - or Nessie as she’s affectionately called - is a mythical creature that inhabits Loch Ness in the Scottish Highlands.

This creature is often described as very long and large, with humps protruding from it. Sounds rather like an ex of mine, in more ways than one, but maybe I should stop talking... and you know me darling readers, I am the absolute soul of discretion.

According to our good friend Google, Loch Ness is a large, deep, freshwater loch extending for 37 kms - that’s a pretty sizable stretch of water. And almost as large as the private fishing lake on the family estate. I do hope they’re not expecting me to trek around the whole lake - one could be stranded here for a lot longer than intended!

Thankfully, my first encounter with the loch was aboard a fishing boat. Now one could have opted for a boat specifically aimed at tourists trying to spot the monster, however, I’m more than capable of spotting lurking monsters, and, quite frankly, if one were to become famous for finding and photographing this mythical creature, one would rather not be fighting one’s fellow shipmates for that privilege. This gal would, quite rightly, want all the fame and fortune for herself.

Back to the boat, where the captain asked if I wanted to fish, to which I replied that the only thing that I ever fished for were men and compliments! Now was not the time for me to haul in cold, smelly fish, after all, I’d fended off a few back in the day… So while I am more than prepared to sing for my supper, I’m less enthusiastic about catching, preparing and cooking it!

After many hours circling the loch, one is sad to report that there were no sightings and so one headed back to the hotel to re-fuel and rest, ready for the next morning’s expedition to the caves around the loch.

The following morning a heavy mist had shrouded the loch. Everything was eerily quiet and a feeling of excitement started to brew at the prospect of exploring the caves and, fingers crossed, perhaps finding the monster's lair. 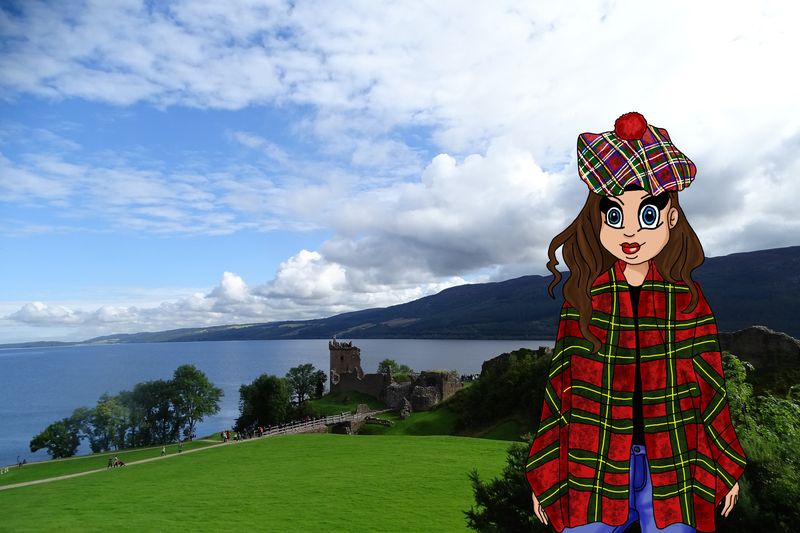 My tour guide - and Nessie expert - Jimmy, was full of enthusiasm, telling the tales of how he and his family had been Nessie spotters for decades, with some rather faded photos to try and prove the point. In all honesty one could have done better on photoshop - not that that’s giving me any ideas…

As the day wore on, I must say that even though we were only halfway through our expedition, one started to lose hope at ever sighting this monster. Then lo, just as one was nearing breaking point, I was scared witless when we stumbled upon a young couple who were half naked and being quite ‘amorous’.

I don’t know who was more shocked; them or us? The lady in question was moderately covered up, meanwhile the gentleman (or should that be genital man?!) laughed it off by joking that he had better put the monster back in its cage before it was discovered and photographed.

One tried to think of a suitable put down but quick wit isn’t one’s strongest point. Daddy says I’ve always been a little naive, and far too trusting. Maybe a tad frivolous, but ultimately, very childlike and innocent. And very, very ditsy, hence the nickname…

Thankfully Jimmy eased the tension and made light of the situation to spare my blushes as we hightailed it back to shore. Apparently, the way you can tell which clan a Scotsman belongs to, is to ask him to lift his kilt.

If he has a quarter-pounder, then he’s a McDonald... 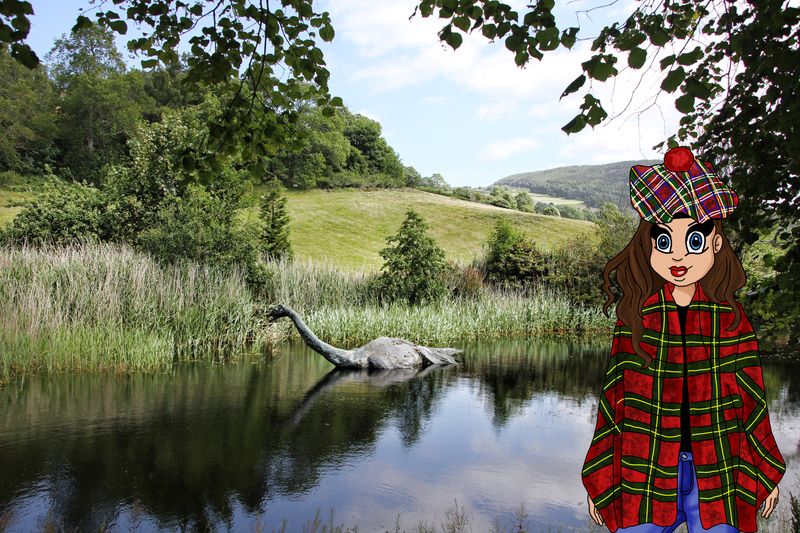 After our ‘brush with nature’, and with no (other) lengthy monsters on the horizon, we made our way back to the hotel to indulge in a little Scottish food and drink, where one tried haggis for the first time, which went down well accompanied by a large selection of single malt whiskies.

The last thing one remembers is dancing and singing along to Highland songs, which all seemed to sound the same, so joining in was easy. Legs were flying everywhere, one discovered exactly what men wear under their kilts, and quite a few bagpipes were squeezed, puffed and blown. However, one is a lady and a lady never kisses and tells!

The morning before one was due to travel back to London, I decided to walk by the loch to have one last attempt to spot the monster, but I’m sorry to report my darling readers that although one came, one didn't see, and one certainly didn’t conquer!

The Loch Ness Monster still remains a mythical creature and I, Lady P, returned home empty handed, a little down but certainly not out!

Despite my initial misgivings about this assignment, I do hope it’s not my only Highland fling. Darling Jimmy is a stereotypically Scottish redhead - and you know how much I love a ginger - and I quite fancy that Lady P McDonald has a rather nice ring to it. Don’t you…?!

Thank you sooooooooo much for my Highland fling. Don’t suppose you could send me to Glasgow sometime soon? I heard so much about the ‘Glasgow kiss’ on my travels, and you know what a hopeless romantic I am!!!

Hope you don’t mind, but there’s some tartan being woven up for me which I’ve asked to be sent to your office, rather than chez moi. Daddy has a brutal sense of humour at the best and worst of times; so when I dared to mention ‘family tartan’ over breakfast, he glowered in Mummy’s direction, muttering something about ‘never mind bloody tartan - ask your mother what the doctor says about nips and tarts’, or maybe it was neeps and tatties...it’s so hard to tell when he’s in full bluster and halfway through a decanter of Scotch…

In the meantime, have a wee dram as they say, to keep the cold at bay.

Hope still springs eternal that with my beloved’s imminent departure from the royal household, that he will have more freedom to pursue his heart’s desire. Perhaps I could whisk him away somewhere warm, away from the prying eyes of the paparazzi...