My darling readers, one has been in heaven, metaphorically speaking, since we last ‘spoke’. Why, where, when, and how, you might well ask? Well let’s just say that those darling gals at EH HQ have come up trumps yet again!

I don’t know if you will recall last month’s rugby analogy from one’s sex club shenanigans, with tangled limbs and tackle flying everywhere? Well let’s just say that one thought that the sex club ‘soiree’ was the ultimate peak of one’s life experiences and career to date.

Rest assured my darling readers, it was NOTHING compared to this latest assignment.

And just as I thought I would have to settle in this autumn, and console myself watching the Rugby League World Cup, to get a ‘fix’ of some taut testosterone ‘talent’ to wean me off such a life-affirming, adrenaline ‘high’...

Now usually when one is faced with an email stating that I would be party to a team building exercise weekend, and at an army assault course no less, it’s fair to say that the Dita of old would have thrown the mother of all ‘toddler tantrums’. However, over these last few years, one has learnt that those clever gals at EH HQ are absolutely genius when it comes to doling out these assignments, and I swear that they know me better than I know myself!

So it was with an open mind, closed legs, and a hopeful heart that I embraced the latest assignment, secure in the knowledge that a stupendous weekend lay in wait! 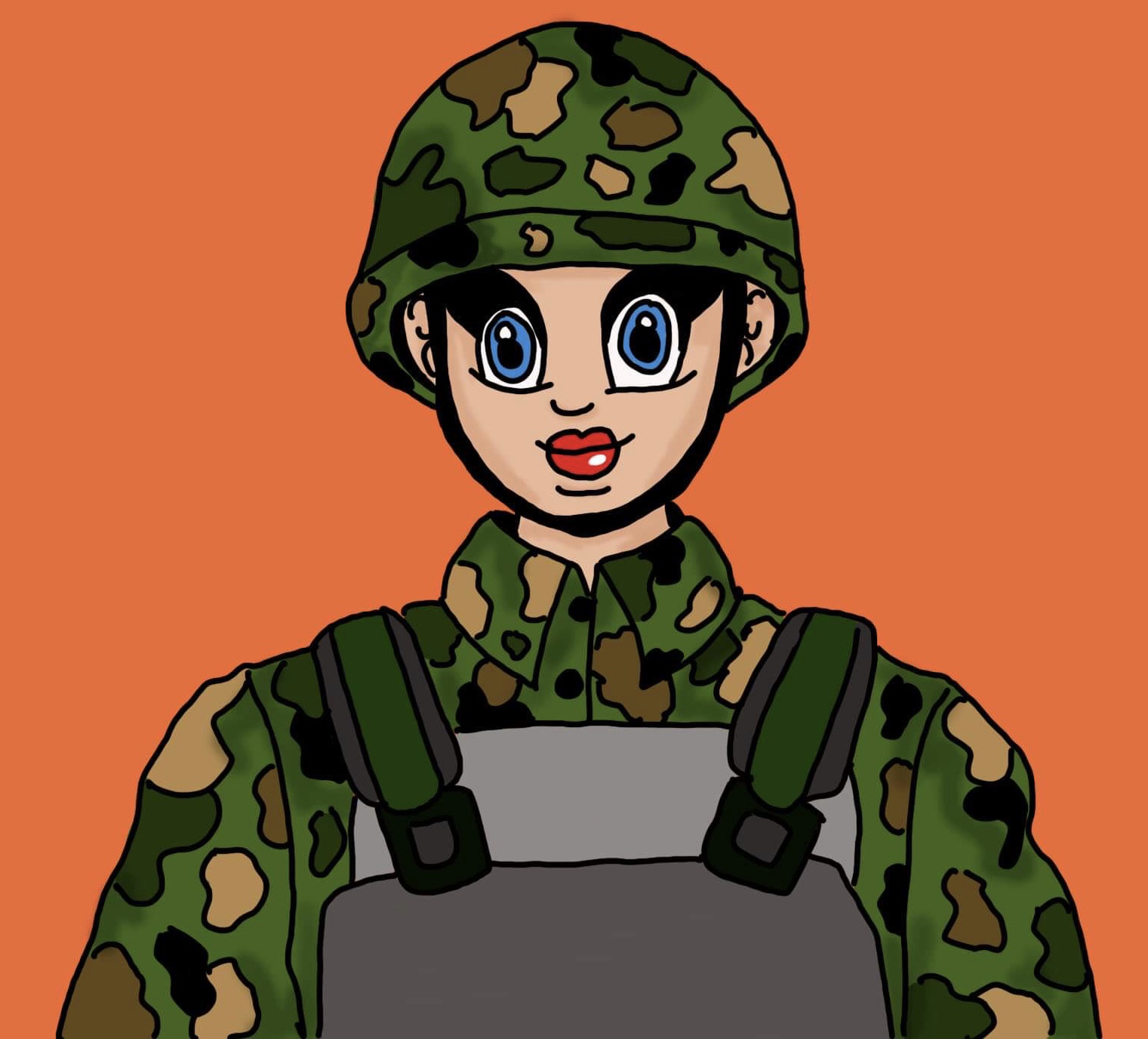 The weekend activities would call for some figure-hugging combats to showcase one’s pert derriere at its best, with some rather fabulous undergarments to show off one’s assets, and on the off-chance anyone might need to do a FULL kit inspection, before, during, and/or after the many action-packed exertions which lay ahead.

One’s bags were packed with ALL the essentials - that ‘private members’ sex club really was quite an education and an absolute font of invaluable information, especially with the extensive range of lubricants and toys it had on offer. It was most enlightening, so much so that one has completely overhauled her little bag of tricks, all in the name, aim, and sole goal of heightened pleasure. And not just mine dahhlings…

T’was time to let the team building begin, and time to get stuck in…

One is delighted to report that, soon after arriving and settling in, one didn’t have to wait long to meet one’s fellow team mates. And one was absolutely thrilled to discover upon surveying the scene and one’s ‘camp mates’, that there was hardly any other females (aka ‘competition’) in sight - this would turn out to be a big win-win for little ol’ me, especially as I was looking rather hot in my army fatigues, and more than a little reminiscent of the gorgeous Goldie Hawn in Private Benjamin.

Now imagine if you can, a bevy of camouflage-clad beefcakes as far as the eye can see, a smorgasbord of rippling muscles, oozing with testosterone…one was positively salivating at the endless possibilities of what one could expect with a close encounter or two. Or three... What can I say? One was ravenous dahhhlings, and a gal cannot subsist on army rations alone!

I would also like to wholeheartedly thank the chap in charge, who had placed me with such a delightful and gorgeous group of strapping hunks. The weekend looked to be shaping up verrrrry nicely, thank you very much…it was time to put one’s stamina to the test and, with one’s fellow fitties in tow, it was time for us to receive our instructions…let the games begin, and let battle commence!

As a little warm up, and ‘getting to know you session’, we had a tug of war - tho seeing a rope at such close quarters again, in a matter of weeks, did initially leave me more than a little flustered - thankfully that soon passed, only to be swiftly replaced by vivid memories and flashbacks of my boarding school days. A local businessman used to encourage us gals to live-stream our dormitory tug of war games for him and his pals to bet on - the proceeds of which funded our expensive shoe habit, not that you ever heard Daddy complain quite so much back then...

This chap and his chums also generously sponsored our ‘team kit’, which got skimpier by the month, leaving very little to the imagination, resulting in near-hospitalisation for several poor gals who lunged rather than tugged at an inopportune moment.

Thank goodness for forceps is all I’ll say…tho they have never (knowingly) worn a thong again. Our Daddies’ solicitors were kept VERY busy that month, preserving our respective reputations, and cleaning up the fallout. As for the leery businessman, we last heard that he was keeping a low profile somewhere out in Asia, and now featured prominently on Interpol’s ‘most-wanted’ list.

Anyway, I digress.. this gal has toughened up and wised up somewhat, learning a few tugging techniques over the years, and there was no danger of Dita loosening her grip, well not unless someone yelled out the safeword. One got stuck in with gusto and heave-ho’d, and all the while securely sandwiched between two strapping ex-soldiers. Could it get any better?

Uhhhh, YES. Apparently it could!!!

Over that rambunctious team building weekend, I embraced every challenge I was presented with, and then some…

You can keep your ‘I’m a Celeb get me out of here’ format - on my return to the bright lights, I’m going to pitch a programme with the working title of ‘I’m an Aristo, get me stuck in there’ - the winner of which will get first dibs on the training instructors. Or is that a bit old hat and a teeny bit un-feminist of me to say in these times?! Tho I do know that Daddy would endorse ANY venture which saw me getting paired off, and off his hands once and for all.

Anyway, I digress. Here’s a not so brief recap of the breathtaking activities I threw myself into, ‘incentivised’ by some gorgeous first-aiders, pumped and primed to race to one’s ‘rescue’...

In fact, it’s fair to say that one could have given Bear Grylls or even Rambo a run for their money!

One can quietly yet confidently attest to having learnt some new skills in the bedroom department - who knew a gal could have so much fun with a tub of camouflage paint and a ration pack, and a newly-acquired stamina which surpassed ALL expectations, even impressing one’s instructors. One could go at it for hours without breaking a sweat. It was like someone had taken out the Duracell batteries, replacing them with a diamond battery that lasts an eternity!

In between my MANoeuvres (so to speak), I was on to my glossy posse gals pronto via WhatsApp, to regale them with all the juicy details of my new found SAS - skills and stamina! They were so impressed, nay jealous more like, that there was quite an unseemly stampede to sign up to the next SAS-building weekend. AMEX must have seen quite the surge in transactions coming out of Chelsea that night!

Suffice to say, one is now more popular than ever, fitter than ever, and in a league all of my very own when it comes to bedroom olympics. Or any other room you care to think of! Sex is my super strength and earth-moving superpower. Lady P. Vixen and sex goddess extraordinaire. At your service!

After this enlightening week, one is a far fitter and stronger human being than hitherto. I hear on the grapeline that a certain Ginger has grown a little weary of La La Land, and should he return to our fair shores then maybe one could help him regain his coveted status within the military, especially now one has a lot of expertise with ‘SAS’ training. Then again, variety is THE spice of life, so why limit oneself when there’s such an array of weaponry still waiting to carefully handled and fired?!?

Well my darling readers, it’s time to bid you goodbye, and I’ll sign off with all guns blazing. So to speak…