My darling ravishing readers, one is feeling simply euphoric…on top of the world even, one might say…well almost...

Why you may ask?

You know that feeling you get when you feel like you’ve accomplished something humongous, like you’ve climbed a mountain? One’s own personal Everest?!

Well my darlings, one has only gone and done just that! I return to you - triumphant - from a trek to base camp at Everest!! Even Daddy is extremely proud of me (for once) - so ‘bloody’ proud that he has done nothing but regale (and bore) his backslapping cronies at the their secret club for days on end, proposing endless toasts to his brave and daring daughter at every given opportunity for my feats of derring-do! Any excuse to crack open the best cognac, but thanks Daddy for the high praise. It doesn’t happen often, so for now one is going to revel in the glory and bask in the afterglow! 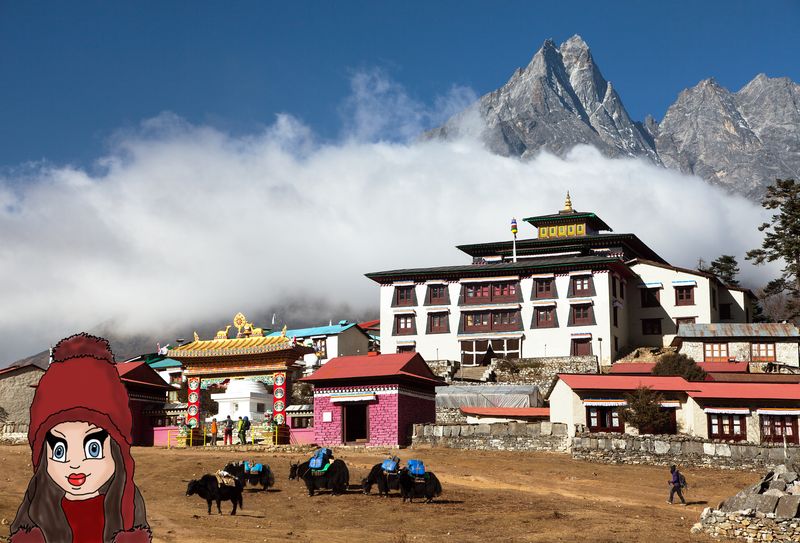 Now I’ll let you all into a little secret (because after all, we are SUCH good friends by now and we have a very honest relationship, well at least 95% of the time). When this assignment first landed in my inbox, one was a trifle distraught thinking that those usually fabulous gals at EH HQ were trying to punish me after last month’s complete balls up, where one was so incapacitated at the chateau thanks to a bout of, ahem, ‘overindulgence’ shall we say, that one was unable to fulfil one’s duties as an adventurous international travel guru.

Any hopes, dreams or aspirations of being appointed EH HQ’s roving royal report for the forthcoming Platinum Jubilee, were dashed faster than one could say ‘hang out your bunting’! [Lorks alive - I’ve just reread this copy before it goes to publication - thank heavens for HQ’s proofreader - my autocorrect typed something FAR ruder than bunting, and I’ve no idea how THAT entered my virtual dictionary! Daddy?!?!?]

One couldn’t help but have a sneaking suspicion that this latest assignment was potentially my last one, and a not-so-subtle ruse to do away with me, such is the reputation of this destination!

Cue one teeny tiny tantrum before those fabulous EH HQ gals pointed out what an accolade this trip could be…more than a feather in one’s cap, not to mention the gentlemen who would be impressed by one’s sheer determination, agility and stamina! At the mere mention of gents being impressed, one quickly got on the case. And it would be such a shame not to put one’s lung capacity to the test, which I’ve been assiduously working on, by fair means AND foul…

First up I needed some help from Google to source the best and most flattering climbing outfits; thus, with the help of the sainted Maria, my ever-trusty right-hand woman, everything was sorted pronto and before one could say “pass me my crampons”, one was soon airbound for Nepal. Himalayas here I come! One was about to discover the majesty of the mountains and delve deep into just how much gumption I had within me. Heaven alone knows that a few have tried - and been found wanting - with the latter… 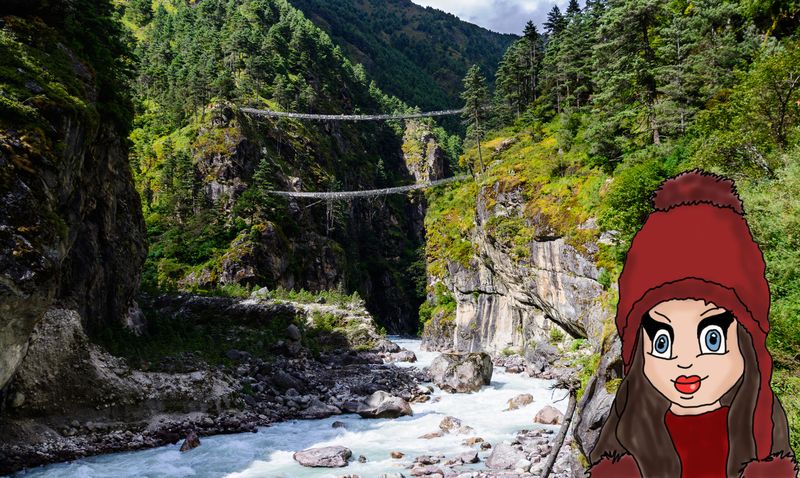 One was well aware that hiking the Himalayas would be no walk in the park - despite my intimate knowledge of London’s Royal Parks terrain, from my ‘stakeouts’ of a certain ginger person who shall not be named - anyhow, I digress…you know me my darlings, I’m as fit as a fiddle, supremely flexible, my stamina is not to be under-estimated and my breath control skills and lung capacity are legendary! Don’t just take my word for it - the graffiti in many a gentleman’s club locker room can attest to this!

After a long yet relaxing flight, one bid farewell to the champagne and luxury lifestyle ready to embrace becoming a mountaineer. Once safely deposited on firm ground one had a few hours respite before another plane ride from Kathmandu to Lukla - the famous airport in the sky.

I must say, one was mightily impressed by one’s first glimpse of the Himalayan mountain range. I've seen some pretty impressive rugged peaks and boulders in my time but this was a sight to behold…absolutely breathtaking and more than a little daunting!

After a meet and greet with one’s fellow trekkers and guides it was time for bed before the adventure of a lifetime became reality. ‘Tis safe to stay that - uncharacteristically - one has no intention of any romantic entanglements and that’s not on this trip’s agenda; however, never say never, and if one were to be swept off one’s hiking boots on the ascent, then perhaps a mountain affair is meant to be.

The next few days were exhausting but oh so exhilarating and boy was I put through my paces - even though it was damn hard work, my eyes were on the prize - killer thighs and a delightfully perky derriere that would rival J Lo’s!

One’s eyes were also treated to the most divine scenery - the turquoise glacial lakes, and the gigantic rugged mountains, frothy rivers and green valleys. It was all simply breathtaking, with the added bonus of bonding with this marvellous little group of people, all sharing this life-changing experience, especially at night in the little tea houses (small bed & breakfast-like hotels) along the way. 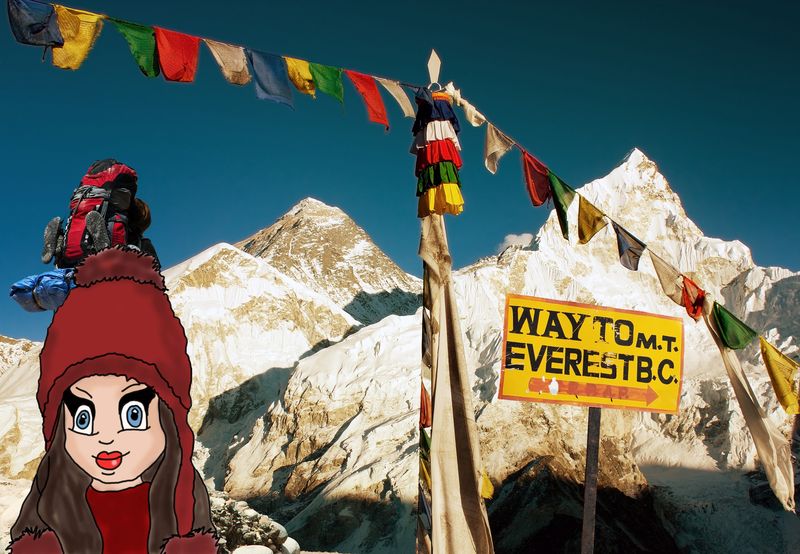 One could scarcely believe that you could have so much fun and which was NOT fuelled by alcohol…maybe cousin Pierre could learn a thing or two about that, and also Daddy for that matter - now he would benefit enormously from the brandy glass being surgically removed from his hand. As would the estate’s drink cellars and family coffers!

When we arrived at basecamp, it’s fair to say that I felt as if I were on top of the world - not quite, but close enough. I’d even compiled a little playlist for the occasion - The Carpenters’ ‘Top of the World’ was a group favourite, which we delighted in singing along to at every opportunity, altitude and oxygen levels permitting!

The day was spent taking photos, filming videos of one’s triumph to send to Mummy and Daddy, and naturally, for social media content, not that one is into bragging, however, this is no mean feat and I intend to show off and milk this triumph for as long as I can before I annoy people too much! Although some critics (like Daddy) might say I’m already starting from a pretty low base as it is on that front…

One cannot adequately describe just how special this mountain was…it was magical, but also a little eerie and sad knowing that so many people have perished there. Everest is a cruel mistress. One was feeling a little melancholy and reflective, but one’s spirits rallied with the help of my gorgeous fellow trekkers who insisted I join in and celebrate our little group’s achievements, by toasting our triumph with hot chocolate, topped with melted marshmallows whilst relaxing on deckchairs with the sun blazing down and glinting off the snow-covered mountainside. 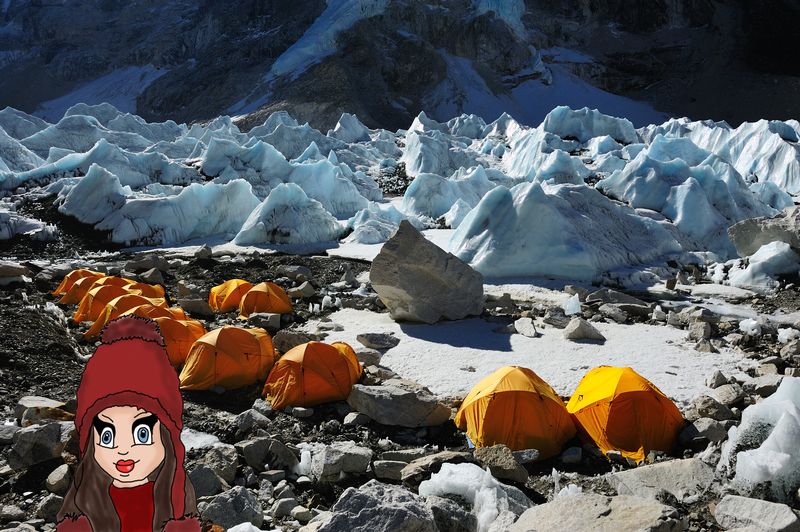 That night, one sat around the campfire chatting to fellow climbers who were going on to Camp 1 the following day and hopefully the summit over the next few weeks - oh how I wished that I were going too. Their enthusiasm was infectious and inspiring - can you imagine just how awesome it would be to reach the summit, to stand on top of the world?

One could quite probably be the first ever Lady to top the mountain…yes? One would have to consult the all knowing oracle…Google. What a magnificent achievement - a feather in one’s cap so to speak and one that Daddy could brag about forever and a day. Goodness knows he doesn’t have much else to praise me for, unless profligate spending and champagne consumption are considered superpowers or an Olympic sport?!

On the descent, one had time to reflect on the events of the last week and came to the conclusion that one has to live life to the full and grab all the opportunities that I possibly can: be adventurous, be brave, be daring and be absolutely fabulous at all times!

Bidding farewell to one’s little group of friends was rather emotional to say the least but we all - bar one - faithfully promised to keep in touch and possibly return to the mountain next year, more prepared and better trained…

Accompanied by my Sherpa, I made my descent to the not-so-dulcet cries from the London-born Cockney gentleman, muttering something about having a ‘bad case of the Von Trapps’ and possibly having to abort his trip, unless someone had a stash of Imodium he’d sell his soul for. Turns out my early suspicions were right - he really was full of ($h)it after all - so far be it from me to stop nature and karma in full flow… 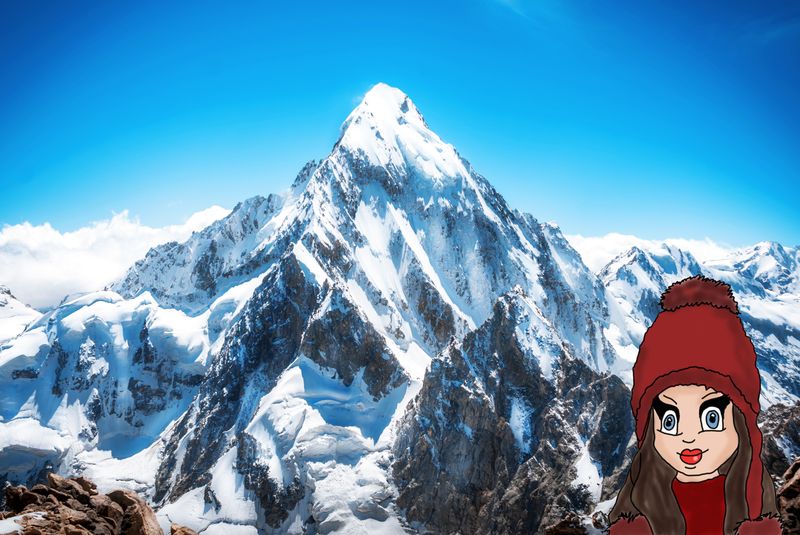 I remembered my sainted Maria’s sage advice about such fickle suitors. Oh how proud of me she would be, and how she would laugh when I tell her that the hills most definitely were NOT alive with the sound of music, but something far more graphic and unpleasant!

I was - fleetingly - tempted to return to his rescue with my personal unused stash, however, he had rebuffed my coquettish glances over the campfire, as he was more intent on trying to get a signal for his bloody phone! Pah - nobody puts Lady P in a corner, or hung out to dry on a snowy mountain ledge!

The silly social-climbing sausage soon changed his tune tho once he found out I was titled - and suddenly, surprise surprise - couldn’t do enough for me. Harumph. Too little, too late darling. I can spot a social climber a mile off. What a pity his mountain climbing abilities were just as clumsy. Goodness knows how he would’ve measured up in a sleeping bag a deux! Thankfully one will never know!

Anyway, I digress my darlings. Life really is too short to spend on those who only want something from you and have nothing to offer in return, apart from hassle or heartache. I’m off to a mini-yoga/Zen retreat to restore my equilibrium before I fly home. I’ve not even returned home to do a full-blown (so to speak) post mortem of this trip, but one thing I have already promised myself - and you my darlings - is that next time I promise to go ALL the way!!

P.S. **Team HQ - thank you darling gals for such a - quite literally - breathtaking trip! Who knew my deep breathing and lung-capacity building exercises would be so useful! My talents are limitless. I look forward to improving them some more.

But for now, I’m going to catch up on the Platinum Jubilee highlights. Hopes of a ginge-binge-fest have been dashed, and sightings of the princely one in town are as thin on the ground as his hairline…My bad?!? I guess there goes the Damehood in the Birthday Honours list… Tant pis!