My darlings - one is currently Stateside on one’s latest assignment!

Those darling gals at EH HQ have only gone and sent me to scope out Devils Tower in Wyoming. And for those of you who believe in the existence of extraterrestrials and all things ‘alien’, you will already know that this famous igneous outcrop was the focal point of alien and UFO landings in the iconic sci-fi film, Close Encounters of the Third Kind.

What is it that is so special about this mountain you may ask? And more to the point, did I encounter or get close to anything remotely suspicious or delicious!? Attired in one’s bestest alien-hunter outfit, Lady P set off to investigate…

One’s alien hunter outfit comprised of a fabulous Hugo Boss, khaki two-piece - well if one needs to take cover amongst the foliage, one had better blend in…one can’t even begin to imagine being abducted by a group of overly-curious aliens on the rampage, with their probes on high-alert…hmmm, then again, on second thoughts, one could be in for the ride of one’s life! Move over Sigourney, there’s a new Ripley in town!!!

However, heaven help one gets taken hostage, with Daddy forced to pay ransom demands. Tho knowing Daddy, he will probably calculate that it would be MUCH cheaper to pay them to keep me, than welcome me back into the family fold! I know just how angry he was after paying one’s latest credit card bill. It caused the mother of all rows at home, as he threatened to cut them up - AGAIN - whilst raging and ranting about “bloody stupid women, always putting themselves into situations they can’t bloody handle and then needing bloody rescuing!’” Oh do change the script Daddy-o!!! And he moans that us women are repetitive! 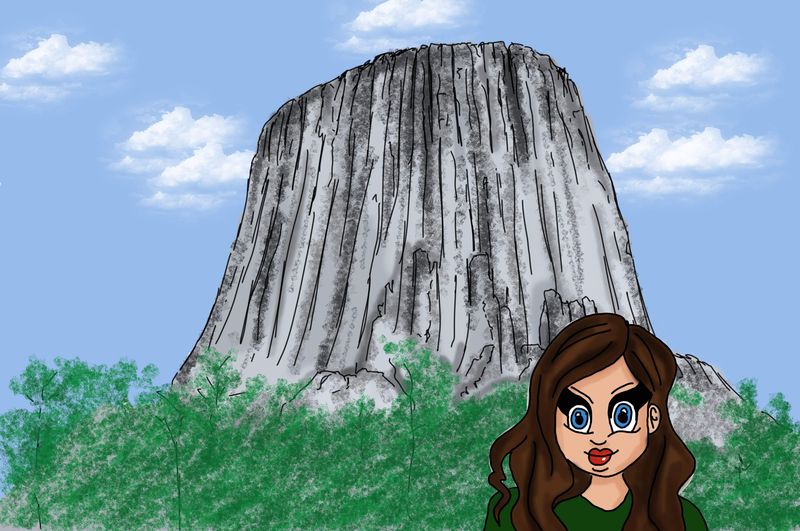 Anyhow, where were we? Ah yes. I remember. Part of one's intrepid alien-hunter outfit, was a nifty utility belt with lots of attachments to hang items off, perhaps a hunting knife or a compass even. It also has a large buckle which proved very difficult to open when one got caught short, but which on reflection would be a useful safety feature, especially if one did encounter any ‘overly curious’ aliens wanting to perform one of their infamous probing exercises (if one’s rugged rugger pals’ tales are to be believed). Getting one’s pants off would be NO easy task! A responsible security-conscious gal has to consider such practicalities and safety features!

Finishing off the outfit was a pair of sturdy yet fashionable hiking boots which would allow me to walk, climb, or run even, if the need arose. Not that one was planning on doing anything toooo energetic on this trip…

So back to Devils Tower which is situated in the Bear Lodge Ranger District of the Black Hills, near Hulett and Sundance in Crook County, northeastern Wyoming.

Some fascinating titbits about the Tower include: geologists agree that Devils Tower began as ‘magma’ [hey - if I have to hear it in Dr Evil’s voice, then so must you !] or molten rock, buried beneath the Earth's surface, however, what they cannot agree upon are the processes by which the magma cooled to form the Tower, or its relationship to the surrounding geology of the area. Which, in a nutshell, means they haven’t a Scooby Doo clue how it really got there! Perhaps Close Encounters was more fact-based than fiction after all, and the aliens put the Tower there as a designated landing pad, much like their equivalent of Heathrow Airport!

The journey to the Tower was longer than I’d anticipated, but thankfully, one was thoroughly entertained by a rather heated b*tchfest unfolding in our WhatsApp group. Apparently one of the gals has taken up with the ex of another and all hell has broken loose, with screams of ‘girl code’,‘forbidden to date another’s ex’, yada yada yada…

My advice was to stop being so precious, after all, one person’s trash could be another’s treasure - or, as I so indecorously put it “one woman’s tw*t in tinfoil, is another woman’s knight in shining armour”. Don’t worry Olivia Hell, I’m not after your agony aunt crown darling - anyway, I have my own tiara…

Unfortunately one’s comment went down like a lead balloon and when the catty retorts started to flood in, well suffice to say it was time to fake a poor WiFi connection and be done with the whole thing, leaving me to enjoy the peace and quiet, to soak up one’s slightly surreal surroundings.

Back to the Tower - no, not THAT Tower darlings, tho I do think a certain ginger someone could do with a timeout in there to reflect on their ‘life choices’ - anyway, I digress…As it loomed into focus, one was hit with a sense of foreboding. I am not ashamed to admit, as broad-minded and adventurous as I am, that I was more than a little scared. What if I were to have a close encounter of the 3rd kind!? After downing a fortifying snifter of cognac from the hip flask which ever so niftily fitted onto one’s utility belt, one was ready to take on the world, or at least ready to conquer another mountain!

Look out Devil’s Tower, Dita has mounted Everest, so to speak - well not quite strictly true but one has been to its base camp and fine-tuned one’s lung capacity. Anyway, one was not planning on climbing the tower, just a mini exploration of the surrounding area with some great photographic opportunities - that Insta feed isn’t going to feed itself!

Although the sun was shining and the mountain looked spectacular, I couldn’t quite shake off the eerie feeling consuming my entire body. At this juncture, eyes in the back of my head would have been a most valuable asset as I jumped and trembled at every small noise and movement. Adrenaline was coursing through my veins as I gingerly trekked through the surrounding forest.

And then - just as one had started to semi-relax and acclimatise to one’s surroundings - a teeth-baring, snarling prairie dog leapt out from behind a foliage-shrouded tree. Well my darlings, the piercing scream I let out would have awoken a deaf hermit in Outer Mongolia, such was its sonic-boom breaking levels! Thanks to this gal’s sturdy, sensible footwear (a cobbling first!), one hot footed it out of there pronto, with my guide and driver in even hotter pursuit, looking more than a little perplexed by my ‘outburst’!

Once safely back out in the open, on a more even, well-lit terrain, I finally got my breathing back under control and the ticker back to a steadier beat, where I was able to explain to my guide and driver why I had reacted in such a way.

On reflection, perhaps one had been a tad melodramatic, however, after stating my concerns about alien abduction, accompanied by mucho batting of one’s eyelashes and flirting up a storm, the darling driver - whom I’d had my lusty eye on from the outset - eventually came around to the idea that I was indeed a damsel in distress in need of rescuing!

So whilst I busied myself taking lots of fabulous iconic photos of moi and the towering landmark, along with a few pouty posing ones for my ardent followers, we quickly and mutually decided that a full escort back to one’s hotel suite to safely ‘deliver me’ was essential, but not before we made a slight detour via the park ranger’s lodge to pick up some lightweight ropes and harnesses… Lorks - as if this gal hadn’t already scaled enough hard rock for one day…

At the risk of being unusually indiscreet, let’s just say on this ‘occasion’ I didn’t have to heed the rock climber’s advice of ‘don’t look down’. The view was very easy on the eye, so to speak…So whilst one didn’t see any aliens, one did enjoy a close encounter of a sexy chauffeured kind.

Poor chap - he’ll never see a dipstick in the same light again, nor do an oil change without blushing…And on that slippery note, I shall leave you my darlings, and check to see if he’s agreed to the lawyers’ latest amendments to his non-disclosure agreement…

Another triumphant trip darlings. Thanks awfully. If anyone wants me, you can hunt me down to one of the many immersive art experiences in and around Blighty, where I shall be decompressing from one’s travels and jetlag - Van Gogh, Klimt and Dopamine Land are already calling my name darlings - toodles!