My darling ravishing readers, oh my, what a month it’s been and where does one start? And that’s not even counting Valentine’s day!

As you will probably remember from my last column, I decided to enter the murky-ish world of online dating, where quite frankly, one was absolutely inundated with requests! I felt like a kid in a candy shop, faced with all these delectable, masculine morsels to feast my eyes upon, rendering any rational thoughts invalid, and flying straight out of the window.

I am only partially ashamed to admit that I satiated my ‘hunger’ as if I’d not been fed in a year. I couldn’t stop myself. It was like an addiction; the more they flattered, the hungrier for love, affection and attention I became. It was intoxicating, and one fell hook, line and sinker. What can I say? I was an attention junkie, and nowhere near ready to go cold turkey. However, a cold shower might have been FAR more appropriate...

Naturally, somewhere down the line it had to go t*ts up didn’t it? We know all too well that if things are too good to be true then they often are! The path of true love or lust never does run smoothly does it?! I had been making steady progress with one particular suitor. We seemed to have soooo much in common: multiple homes, well-travelled, cultured, burgeoning trust funds, lots of free time on our hands...it seemed like a match made in heaven.

After what seemed like an absolute eternity exchanging messages online - no more than 48 hours - but in dog years and dating years THAT is SUCH a loooong time! High on life, and giddy with each other’s compatibility, we decided to take it to the next level. Swap phone numbers, and have a real-time, real life phone conversation!

The first call went rather swimmingly. We shared childhood memories and revealed all our hopes and dreams for the future. The call lasted for hours, and when I hung up it felt as though one had found a kindred spirit. The call went well so we arranged another for that evening, which would take place late at night, when I had retired to private quarters, with privacy assured... 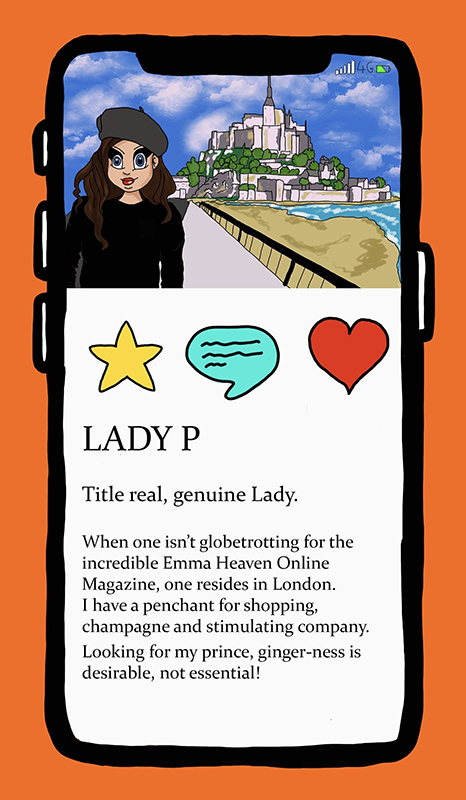 After a long, languorous and luxurious bubble bath, I liberally creamed and doused myself in Chanel No 5. Armed only with a bottle of cognac, a diaphanous silk negligee and a twinkle in my eye, I draped myself provocatively on the bed - well one does have to set the scene to create the right atmosphere and get oneself ‘in the mood’! like a breathless giddy lovesick teenager, I waited impatiently for the phone to ring....and when it did, the conversation most definitely didn’t disappoint…

You could feel the electricity prickle between us - had Daddy known how much electricity we were producing, he’d have installed solar panels and wired me up in my bedroom to generate heat for the entire draughty old pile we call home!

At this juncture one knew that this was NOT going to be your average convivial ‘getting to know you a bit more’ kind of chat, when the conversation soon turned to the divine bath I had just taken. This nugget of information seemed to pique his interest and he pleaded for me to tell him all about it; the more detailed the better!

Now I know I can be naive at times but one knew exactly what he was after...Having been so starved of attention lately, I was going to give him what he wanted, and then some...after all, what harm could it possibly do?! Well my darling readers, quite a lot actually, but more about that later...

He wanted a raunchy story and he was going to get it! I knew I was on the right track when I could hear his breathing alter as I started to describe sinking into the soft bubbles and hot water, with my body relaxing as I soaped my body from stop to bottom, and how I had stuck my big toe in the trickling bath tap while the warm water coursed over my ankles.

By the time one had reached the Chanel No 5 ritual I began to fear for his health - he was making some worrying noises - I thought perhaps he was having an asthma attack and maybe needed some help closer to home; rather than endanger his health and potentially kill off this love match so prematurely, I brought the story to a swift end, before bidding him a good night and ended the call.

Soon after I had ended the call, one was alerted to a message from him. What with him having been the perfect gent up until now, I fully expected it to be a short sweet message of ‘thanks for the call and let’s do it again soon’ kinda thing.

Nothing, I repeat absolutely NOTHING could prepare me for the message I opened. It was a video message. I guess you could say that he was thanking me for our late night phone call, but NOT in the way most people would.

One was greeted by a close up of him ‘having fun with one’, before climaxing over his eiderdown. The shock was unbelievable, and please don’t judge me too harshly here my darlings, but I had to watch it again. And again….And again. One had to be absolutely certain one wasn’t dreaming or hallucinating.

Alas, I wasn’t dreaming nor was it a hallucination...I’m reliably informed by my VERY liberal and broad-minded Scandinavian cousins that this is what’s known in certain quarters and industries as the ‘money** shot’, and here was I - the proud recipient and owner of one, made especially for little ol’ moi. I flipping hope so anyway, not that I’m a jealous sort....
**I somehow don’t think this is the kind of ‘money’ Daddy has in mind when he says I need to marry for money, not love.

This home movie took on a life all of its very own, I couldn’t stop myself from admiring not only the size and shape of his manhood, but also his technique - maybe I could learn a thing or two?! Although by the umpteenth viewing, I was more transfixed by his bedding and furniture, which I could have sworn I had seen a similar bedding set in last month’s Vogue’s interior designs special. Anyway, who on earth would mix those prints with that chintzy classic decor?! He really does need taking in hand, but probably not in the way he’d want me to….

Now...not having much - correction - zero experience of this kind of thing, I needed advice, and pronto. So one Zoom called a few gal pals. After a brief but raucous discussion one learnt that it is a VERY common practice amongst online daters. Apparently I could also expect to be sent ‘dick pics’, plus all sorts of unsavoury photos and requests. Lucky me eh?!

Over the next few days, one’s gal pals were proven to be 100% correct. It wasn’t long before I was 10 gigabytes deep in ‘dick pics’ and ‘money shot’ home movies... It became quite laughable and the main, nay sole, topic of conversation between me and the gals as we assessed and dissected each pic and video. We saw more appendages than a fully-booked urologist!

Becoming so well-acquainted with the male form and its ahem, hydraulics, one has decided to capitalise on this knowledge and experience by launching my own awards called ‘The Dickies’, with the following categories:

To say the gals were excited is putting it mildly. One is the talk and toast of the town. I had to set up a discreet #NSFW WhatsApp group where we can discuss the finer points in intimate detail, and a separate email account for forwarding nominations.

The housekeeper had a fit of the vapours when my first trial message went to the wrong email. Thankfully that little teething problem has been resolved, and our marvellous family doctor tells us that she is expected to make a full recovery from an unpleasant twinge of angina, rather than a full-blown heart attack as was initially feared. Golly, it’s so easy to mistake the sound of someone in the throes of ecstasy with that of being in acute agony. That good news is one happy ending we’re all pleased to be a part of...

Now all I have left to do is set up a voting system and voila, we are in business! Move over the Oscars...there’s a new awards ceremony in town! I think I’m going to have my hands full one way or another over the next month.

And on that deliciously, deliriously high note my darlings, I have to bid you adieu as there’s so much to do and so little time.

See you next month with a fully ‘Dickie’ update.

Gosh, what a rollercoaster month it has been. I’m exhausted. However, I shall persevere with this online dating mullarky, even if it has turned into quite an unexpected phallus-fest. I thought it was only too much ‘self love’ which is supposed to make you go blind...

And our housekeeper keeps begging for me to add her to our select WhatsApp group, having had her appetite so whetted recently. However, Daddy has warned me that she is far too valuable a resource to have laid up in hospital again, and we could be liable for any ‘injury’ sustained in the workplace. Something about us having a duty of care, blah blah blah…

Anyway, it’s all gone quiet from her for now, although family mealtimes do seem to be quite sausage-heavy in content. As ‘sausaged out’ as we are, Mummy reckons it’s a far safer option for Mrs Mallory to work out her frustrations on the contents of the larder, to dampen her ardour, rather than be privy to the provocative content of our gals’ ‘Lard or Hard?’ group…