I’m from Swansea in South Wales, and I’m 23 years old. I think it’s important to note here - though you’ve probably already noticed from my photo - that I use a wheelchair in my everyday life. 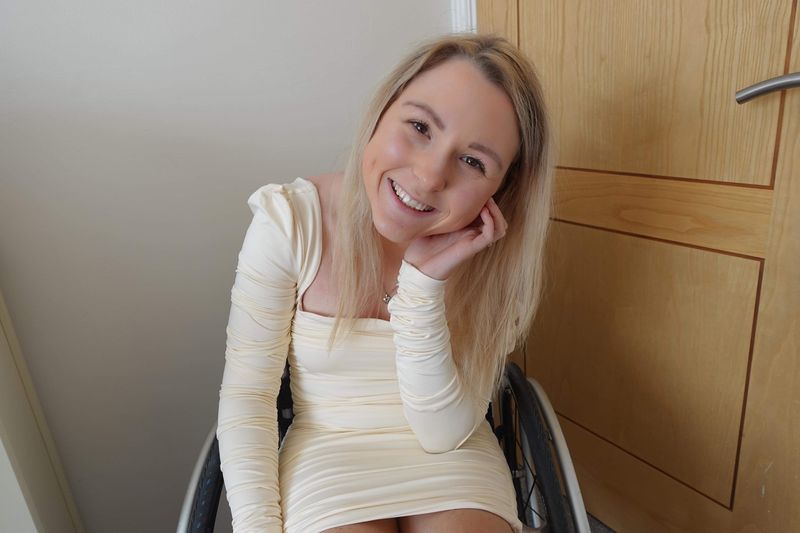 My friends and family will read that and sigh “yeah, we know”...

This is because I have a condition called Cerebral Palsy (CP). Embarrassingly enough, I had to learn more about CP, because a stranger once asked more questions about it that I couldn’t actually answer... *bit awks like*.

Point being, yes, I am disabled; but growing up, I was just a little girl, who sat in a little wheelchair. To my parents, I was simply Emily Nicole, their daughter/diva hahaha!!

I remember my mum saying to me in my teens that “the world didn’t revolve around me”. And I was genuinely shocked and appalled!

My life has been plenty of things, but boring isn’t one of them…

I am loud, gobby, unapologetic, and POSITIVE and I’ll be sharing random thoughts, with my unique sense of humour and potty mouth on all magazine-related topics, every month. Reading is believing!

The films I watched as a child

Set the scene - *pardon that AWFUL pun* - I’m actually cringing at it myself. Anyway, imagine it’s the mid 2000s.

I had a video player when I was a child. It was pink and covered in stickers from cheap magazines, all stuck upside down and on the wonk.

Watching a film on video as a kid was exciting. Not only because of the film itself, but also, the more that you watched it, the more you actually wore the footage out!

So naturally, the more it was watched, the more I would go into a HUUUGE strop, because it would be pausing and jumping. ‘Overwatching’ a film was a real gamble because it could turn into mush before your eyes and disappear before you could say “VHS”!

My 8 year old brain would be saying: “What’s WRONG with it NOW?!? C’mon I only want to watch the bit where Cinderella goes to the ball. Again. And again...”

I really do pity my parents, scrambling around, praying to the video itself and the Video Player Gods so my tantrum defused QUICKLY with the video springing to life again.
Blowing the dust off it usually worked; or I just had to accept that I couldn’t always have everything my own way, all of the time....

When I was a child, favourite films were kept tidy and watched only when you really, really wanted to. The experience was quite ‘dangerous’ in a cute way, as every time I pressed ‘play’ on the Video Player I wondered if I’d get to see anything at all.

Ecstasy would be when we successfully passed the trailers; and Misery would occur if the screen went fuzzy and dark…

I still struggle with patience even now when relying on technology.

Cursing at Netflix when it glitches or interrupts my viewing to ask: “are you still watching?”
Well, I’m not anymore am I? HA BLOODY HA!

I bet someone in the Netflix office came up with that didn’t they? “I know boys” - or actually no, they’re American over there aren’t they?! so it’ll be “I know DUUUDES, we’ll put up a screen asking if people are still watching the movie, HURR HURR HURR and guess what?! We’ll stop the movie to ask ‘em, so they won’t be watchin!”.

As you can see... I have learned nothing, now 23, and still as moody when I rely on films for happiness.

Watching movies as a child was also pretty magic because I remember the excitement of going to Blockbusters (the video rental store), and the DEADLY gamble of picking the wrong film to rent and potentially wasting £3.50. *There’s Friday night gone right down the swanny and a waste of two hours* As if 12 year old me was busy with things to do, places to go, and people to see!!

Next up was, getting the video home, before checking that it actually worked. Watching it and then returning it for the next person within the space of a week. It was magic because it was temporary bliss, a game of Russian Roulette, something to break up the monotony of life.

The next day at school, me and my mates then debated the topic of ‘Chicken Run’ and if you hadn’t watched it? Well, you’d better find someone that had a copy to lend you, and STAT! Watching a film was rare and a novelty when I was a kid, the drama of it all!! I certainly couldn’t watch a new one EVERY NIGHT! I don’t think my heart could take it.

If Blockbusters was out of the question, you always had the odd day when someone from my class brought a box of the DVDs with films that were already on in the cinema!!! These had usually been filmed by their dad’s friend’s friend of a friend! I always wondered why they had blank cases with no pictures, sounded squeaky and had weird subtitles at the bottom...

“And why are people walking past Nemo in the sea, holding a large Coke and a bucket of popcorn Mum?”

It never clicked that every Friday, my pocket money actually DID endorse DVD piracy. I mean, of course, I didn’t see what all the fuss was about because I didn’t steal a film? I paid £5 for it from Sadie Thomas. What’s the issue? I only want to watch A Bug’s Life in my bedroom. I’M NOT A CRIMINAL!

As I grew up, the movies I watched changed and how I watched them changed too. Blockbusters was buried with my video player and replaced by Blu Ray disks and those weird 3D glasses I used to pose in for photos on Facebook.

The films I related to drastically changed too. Instead of becoming ‘The Little Mermaid’ who found Prince Eric (that loved her, with and without her legs) I became Andie in ‘How To Lose A Guy In Ten Days’.

Despite all of this, I truly think WHY we watch films will never change.

Escapism, relatability and just to feel something.

Whether you’re laughing or crying, you are in the moment completely. No distraction.

If you are alone it’s an intimate memory; if you’re with friends it’s a shared experience. Yet you’re right there in it, in the drama and the laughs.

You’ll remember it forever and it belongs to you.

See you next month,