Darlings, a huge mwah and virtual hugs for being such absolute darlings in trying to secure one’s freedom.

After the wonderful FaceBook #FreeTheLP campaign run by those darling gals at EH HQ, I told Daddy to look at just how popular one is on the magazine; he fruitily replied he couldn’t give a *&%* how many likes, shares or funny looking yellow balls with faces that I received on FaceBook - as far as he’s concerned, social media is a load of old pish, tosh and nonsense, where any deluded, naive moron will get suckered in by a sob story and the click of a button!

Sigh! Another day, another rant from Daddy - who was six parts p*ssed, laying down the law, putting the world to rights from the comfort of an overstuffed, dilapidated armchair ‘en France’!

Forever the pragmatist, an extremely worried Mummy granted my release with just one condition. That I hot foot it to France ‘toute de suite’ to save Daddy and his liver from the clutches of cousin Peter - or Pierre as he now wants to be known as….

Or maybe Pierre had sent Mummy a ‘cri du coeur’ to save his rapidly dwindling wine cellar from Daddy’s clutches. Anyhow, whatever the reason, the thought of traveling First Class on Eurostar (naturellement), and spending time in a beautiful chateau were music to one’s ears. After all, who doesn’t want to be a chatelaine, strolling the grounds of a divine turreted chateau deep in the Champagne region? This latter-day Rapunzel does love a crenellated turret... and cellar-chilled champagne come to think of it!

Armed with a Swarovski crystal-encrusted mask, a camera slung around the neck like a true pap(arazzi), newly-reinstated mobile phone (hallelujah), and several suitcases full of clothes and accessories for EVERY occasion - one never knows who one might meet or what soirees I would be invited to. Lady P was ready, willing and about to launch a mission impossible-style rescue that even Tom Cruise would be proud to be a part of.

Just imagine - me and Tom, hurtling across the continent, in a death defying race against time… versus Daddy and a Jeroboam of champagne...the re-match...Who would come out on top? I know where I’d like to finish given half a chance!! Nudge nudge, wink wink.

Although Daddy can consume an enormous amount of fizz before feeling its effects, he has been hard at the sauce for almost a week now, and that can only mean one thing! He’s turned into (even more of) a belligerent, antagonistic, pugnacious old git! 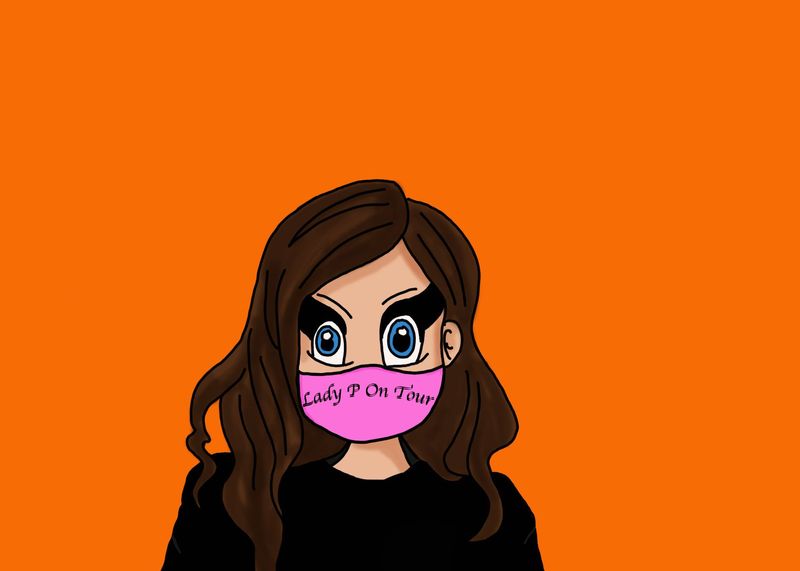 Now I know that may seem a tad harsh, however, in one’s defence, I have been privy to this behavior all my adult life. AND he did lock me up in the West Wing for over a month for crying out loud. So I think it’s my turn to call him what I want, no holds barred.

The shoe is on the other foot now, so me and my fertile imagination are in command of this rescue situation - therefore Tom is coming along for the ride too, to protect me from the words of disdain that will inevitably pour forth from Daddy as soon as he sets eyes on me!

The first revelation on one’s journey was the mask. Now I must confess to being a teeny tiny bit worried about breathing in fresh air and how claustrophobic one would feel, however it turned out to be an absolute godsend, while I unashamedly drooled over an utterly gorgeous beefcake sat opposite me on the train.

One was able to admire, gurn, and salivate in complete privacy, as he flexed those delicious biceps, which happened often. I was all of a fluster, and more than a little moist around the gills when I disembarked at Charles de Gaulle station; by the time I recovered a modicum of composure, it was one mad rush to get the connecting TGV to Champagne.

Thankfully one had the sense to discreetly phone ahead, to ask cousin Pierre’s chauffeur to meet me at the station; soon we were on our way to the chateau, faster than you can say ‘bonjour’!

Once I’d freshened up and unpacked it was time to alert Daddy to my presence. To say he was shocked is putting it très mildly. Unfortunately I can’t tell you exactly what he said, however the air was ‘très, très bleu’ as he ranted and wailed incoherently.

I did manage to make out “bloody forbidden to leave the wing”, “bloody women”, “never bloody listen”, “I don’t need a bloody babysitter”, “I’m not a bloody alcoholic, screw AA”, “I’m a grown man, and no bloody female is going to tell me when, what and how much I can drink, end of bloody story”. I think you get the gist?! With so much ‘bloodiness’ talk, all one could do was mix a stiff Bloody Mary, and wait for the cantankerous loveable old sausage to run out of steam and expletives!

It took a few days before one was able to broach the subject of moving Daddy back across the Channel, homeward-bound, so in the meantime I got up close and personal with my surroundings, which obviously included indulging in the odd bottle or two of champagne, allowing one’s mind to wander far and wide with vivid images of me and Tom frolicking in the vineyards, nibbling grapes and other juicy delights, before falling into the glorious four poster bed! For a man of his mature years, he has rather remarkable stamina. By the time that that Top Gun had finished our aerial acrobatics and firing on all cylinders, I could only yelp for mercy before breathlessly declaring our safeword, ‘missionary impossible’!!!

Alas, all good things must come to an end - fantasy or otherwise - and all too soon, it was time to put mission bloody impossible - ‘Get Daddy Home’ - into action. After conferring with cousin Pierre, we swiftly concluded that Daddy wasn’t going to voluntarily leave quietly, so we would need a cunning plan and copious amounts of creativity!

Much as I would have loved to escort Daddy home, unfortunately, due to current quarantine restrictions back into the UK, it would mean I would be unable to do my job properly. Even this upper crust gal still has to earn a crust dahhhhlings. Thus it was plotted, planned and decided between me and those clever gals at HQ that I would travel around Europe for the foreseeable, and they would FedEx out any further supplies.

Oh how I relished the thought of returning to the warm embrace of the jetset life, and I started to mentally plan what clothes and accessories one’s devoted maid Maria would need to wrap, pack and despatch. Obviously one would need an advanced itinerary from HQ to meticulously plan each country invasion, but a gal can still plan her dream wardrobe...

Back to operation ‘Get Daddy Home’. After a long day of him drinking anything and everything in sight, Daddy eventually asked for a bedtime tipple - reluctantly accepting a large cognac, as he’d drunk the supplies of his preferred tipple -calvados - dry before dinner. Being the dutiful daughter, I offered to get it for him. Whilst pouring a generous slug, I cunningly slipped in a few of Mummy’s herbal sleeping pills, which I had had the good sense to pack. Et voila, within the hour he was snoring and snuffling like a truffling pig!

A hefty ‘tip’ was bunged to Pierre’s chauffeur, especially after he helped us top up Daddy with my special ‘tincture’ before we bundled him into the back of the car, with the strictest and most precise instruction of “DO NOT STOP until you are out of the Tunnel and firmly back on British soil”. Daddy was only to be woken when going through passport control if absolutely necessary. A good excuse to have ready? “He’s had some bad news which he hasn’t taken too well, and you don’t want to disturb him until he’s safely home amongst his family.” It’s only a teeny tiny white lie and they don't really count...

The chauffeur did a sterling job, and deposited Daddy back home the following morning, with his tail between his legs: hungover, dazed and confused, and then, once he’d started to focus and sober up, became apoplectic when he realised his ‘Ditsy’ daughter had outwitted him this time.

Apparently the air returned to its familiar shade of blue, as he grumpily took up residence in his study, armed with enough calvados, cognac and cigars to see him through the coming days whilst he swearily stewed and fumed in solitary, telling everyone within earshot to “bloody well stay away”. Perhaps being all alone and angry in his self-imposed jail, he will realise the harshness of the punishment he imposed on me. That’s karma for you Daddy. Bloody marvellous!

Well my darlings, who knows where one is being sent to next - the excitement is mounting. Talking of which, the stable boy has just called to ask if I’m ready for some dressage around the back. Or at least I think that’s what he said…one’s French is a little rusty, so maybe something has got lost in translation?! Who knows? Who cares? Looking at him in those snug breeches, I reckon I’m going to be taken for the ride of my life!

I think after my travails and exertions here in France, may I request a relaxing destination next? Entirely at your discretion, however, the need for a massage is quite pressing, as I’ve flexed and used muscles on this trip I didn’t know even existed…

I’m quite easily pleased, and would happily consider a no-frills spa if the budget is under pressure. All that I ask is for a beautiful view - seafront, mountains or male! Or all three!

After travelling in such style on Eurostar, I do think I might have caught the train-spotting bug, so don’t let me stop you from looking up an itinerary involving the Orient Express...hint, hint!