One is still ‘en France’. After last month’s ‘Save Daddy’ mission (im)possible, one decided to toast one’s sheer brilliance in successfully executing the perfect kidnap operation, by partying with cousin Pierre! A fellow ‘enfant terrible’ and kindred spirit...

The champagne flowed, this gal glowed, and one completely lost all inhibitions and dignity which is almost inevitable when any bon viveur’s alcohol-fuelled celebrations occur!

Discretion (and perhaps a smidge of memory loss) forbids one from divulging too much information; well that, and the risk of being sued for defamation of character, or arrested for breaking several laws - domestic and international…

Suffice to say it all got rather naughty and a tad out of hand. But to give you an idea, think ‘freshers week goes to Amsterdam’, and you have a pretty good and verrrry ‘rough’ idea. Cousin Pierre insisted that all phones and recording devices be confiscated before the celebrations started; so there is NO evidence, whatsoever! An utterly genius move on his part! Bravo Pierre, bravo!

Phew!!! One imagines Daddy would have gone through the roof (again), if he had to bribe yet another chief of police or judge to overlook one’s teeny tiny misdemeanors...And THAT list is long and endless; rather like one’s appetite for all things naughty of late. I really don’t know what on earth has come over me or got into me? Perhaps I’m rebelling after my recent incarceration and making up for lost time. Well whatever ‘it’ is, it has done wonders for my skin...

Back to France, and after recovering from the maman of all hangovers, it was agreed with those very understanding gals at EH TeamHeaven HQ that, in-keeping with the Hallowe’en issue, I would be visiting Mont Saint-Michel. More than a little research was in order, so I asked my trusty friend Google for the lowdown.

Mont Saint-Michel is a UNESCO World Heritage Site, situated on an island off the Normandy coast. It is connected to the mainland by a causeway which is submerged at high tide, so one would need to plan one’s travel itinerary with precision. Or as the medieval pilgrims nicknamed it ‘Saint Michael in peril of the sea’. Getting tossed around on the ocean wave isn’t for everyone...

Now as much as this damsel loves a bit of seclusion - preferably NOT incarceration by Daddy - one couldn’t afford to be stranded overnight, especially as the site is believed to be haunted by the spirits of numerous monks who lived and died there.

The island remained unconquered during the Hundred Years’ War, and many would-be assailants were kept at bay, or perished even, by the incoming tides. 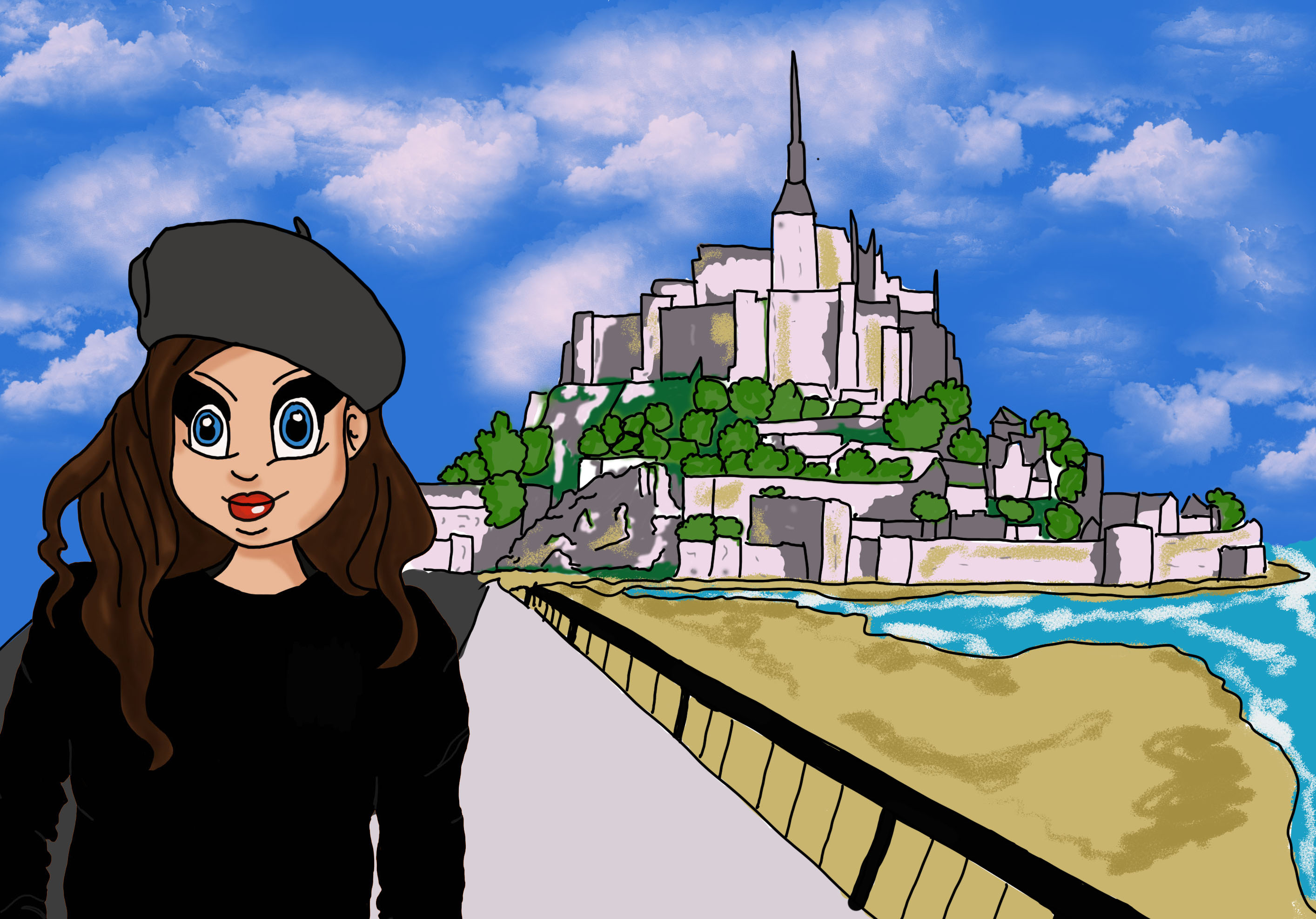 The garrison’s captain, Captain Louis d'Estouteville, led the slaughter of more than 2,000 Englishmen and before the tides returned, the surrounding sand was stained red with their blood as far as the eye could see. One doesn’t need a wild or vivid imagination to realise that their spirits roam free around the island.

With those spooky insights, I would need to keep my wits about me…that is until I read on and discovered that there was a shuttle bus to and from the mainland, with a selection of hotels, restaurants, and - my own personal holy grail - gift shops! Oh how I’ve missed flexing that credit card. I would just have to be clever and reign in the spending a little so as not to alert Daddy to one’s profligate activities!

When I arrived at the carpark I took the shuttle bus and was soon rewarded with over 350 steps up to the Abbey at the top; thankfully I have a large lung capacity - which has improved enormously in recent times thanks to some VERY creative exertions - so there would be no shortage of breath for this fit gal as I lunged up those steps.

As abbeys go, this one was mightily impressive; large, imposing, quiet and verrrry eerie. Apologies in advance for the next bit of ‘oversharing’, but one had the misfortune of letting out a teeny tiny ‘bottom burp’ which loudly ricocheted around the empty walls. It made such a racket, you’d have thought a firecracker had been set off!

This could have proven to be extremely embarrassing, however one was fortunate enough to have one’s blushes spared as, thankfully, there was no one in the vicinity except perhaps the spirits of the monks. This was cause for concern, and not wishing to offend the ‘residents’ more than I already had, I’m not ashamed to say that I was more than a little spooked, so hot-footed it out into the open air, pretty pronto, in search of a bar and a fortifying drink!

One drink turned into two, then three turned into four and one was starting to get that lovely warm fuzzy, tipsy, toasty feeling and upon looking out of the window, discovered that night had fallen and the island was beautifully lit up. I realised I’d missed the return shuttle to the mainland and would need to spend the night. Qu’elle dommage as they say… Let’s hope no spirits would visit me in the night…

I had no reason to worry, thanks to a potent secret weapon...my very own spirit to watch over me...vodka!

Who needs sanitiser or a crucifix to keep invisible forces at bay?! If any other spirits did decide to visit, one would at least have the Dutch courage to politely tell them to naff off and to go frighten the life out of someone else. I’m not normally averse to some things which bump in the night, but every gal has her limits. And standards...Credit moi with some decorum dahhhhlings!.

Emboldened by this brave decision with robust contingency plans in place to fend off any unwelcome visitors, I booked a room, retreating to my delightful sanctuary, with a large bottle of vodka in hand, fully fortified for the night ahead.

Not surprisingly, after a few tipples, one slept like a log, only to be woken the following morning by the persistent ringing of one’s phone.

T’was cousin Pierre requesting - nay demanding - that I get my fabulous derriere back to Champagne for another of his famous shindigs, toute de suite!

Well that’s an offer this party loving gal cannot refuse...so my darlings, one is off to Champagne for one last hurrah before the gals at HQ send me off on my next quest…Thankfully, the tide is out, the shuttle has returned, so no need for me to swim to the mainland; although one has just spied a rather delicious looking lifeguard on the shore, who might very well be able to help one improving her lung capacity…Oh gosh. Is that the time already?!

“Cooey, Bonjour monsieur - wait for me. Attendez-moi. I’m coming. Oh do be a darling and help me with these buoyancy aids..”

These travel restrictions and quarantine wotsits are oh so frustrating. I really don’t know whether I’m coming or going…

However, one would be MORE than happy to quarantine on the Orient Express #HintHint...; and if I had to share a compartment with someone with whom I’ve been in close contact recently, I’m more than happy to ‘do my bit’ to help the fight against this ghastly virus, and keep travel costs down...