My darling ravishing readers - let me begin by first giving one’s heartfelt thanks to those gorgeous, darling gals at EH HQ!

You can only begin to imagine one’s screams which pierced the quiet calm that had finally descended upon cousin Pierre’s chateau after yet another fabulous weekend of fun, feasting, frolicking and fornicating!

The cause of my piercing scream? It was one’s reaction upon opening my email, to find tickets waiting to be downloaded for my journey aboard the Orient Express, along with a covering note allowing one carte blanche on where to visit and what to report on.

It took me a full 24 hours before I fully digested this fabulous piece of news, not to mention the fact that I had celebrated relentlessly with copious amounts of fizz. Well what’s a gal to do?! You know the old saying? When in Rome...or in my case, when in Champagne!

Once (relatively) normal business resumed, I started to allow myself to daydream about the myriad of adventures and possibilities which lay ahead.

A quick phone call to Maria, my wonderful devoted maid, and within a day, FedEx were on the doorstep with suitcases perfectly packed with everything a woman could possibly need for the train journey of a lifetime...She really should be ‘knighted’ for her services, both to me and to fashion. Darling Maria even had the foresight to send an old school ‘portmanteau’, which is very in-keeping with the Orient Express ‘vibe’.

All packed and ready for the off, one was driven to Paris ready to board the famous choo choo and the obligatory photo in front of the famous carriages. One felt like royalty as I swept onto the train, very much looking the part of the eligible young lady that I am, but not before thoroughly surveying the platform to identify any potential suitors to sidetrack me on my latest sojourn.

Once safely ensconced in one’s luxury carriage, with a refreshing glass of bubbles, it was time to sit back, relax in the ambience of my private quarters, and to take FULL advantage of the 24-hour steward service…

The gentleman steward in question was a ‘bit of a dish’, and one does like a man in uniform...don’t judge me...And I could attest to his fitness - what with the speed in which he brought me drink after drink, plus top marks for balance and agility, as I watched him nimbly manoeuvre the relentless chugging of this high-speed train. Such spryness should stand him in excellent stead ce soir. 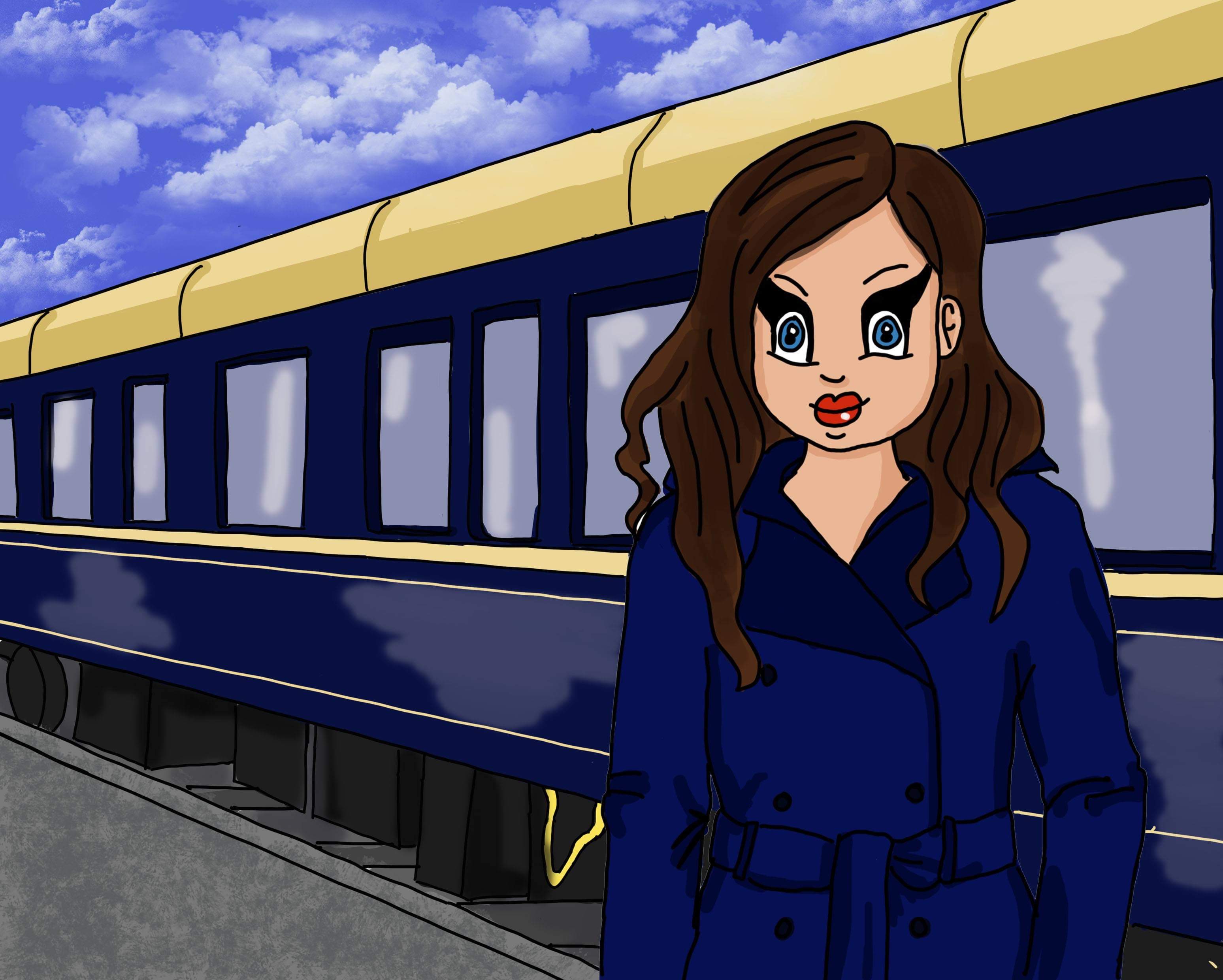 Having already worked up quite an appetite, and feeling a tad ravenous, it was time to descend upon the dining car. My eyes swiftly darted around the diners, mainly to check out the talent, but one was left feeling quite dejected that it was mostly couples. And even worse. Loved up couples, holding hands, staring adoringly into each other's eyes! Oh you really should be careful what you wish for Dita - have you properly thought through this supposed trip of a lifetime?!

Pffft! The Orient Express felt more like the Orient Depress. Sob! One felt rather deflated, so I consoled myself with the rather splendid four-course dinner and cheese board, washed down with a dazzling array of their finest wines. A gal can’t march or flirt on an empty stomach, so some sustenance was vital!

With no eligible hotties on the horizon and feeling more than a little crestfallen, I walked dejectedly to its infamous bar car ‘3674’, ordered an extra large cognac, and took a seat. When I came up for air after savouring my apres dinner cognac, my eyes were instantly drawn to a man seated further down the carriage. And what a gorgeously delightful specimen he was. One was uncharacteristically drooling in the most unladylike of fashions. Suddenly, the prospect of a little rumble and tumble on the Orient Express was back in play. Toot, toot!!

The atmosphere was electric as our eyes locked and flirted with each other, across the midnight blue and sparkling gilded Art Deco decor. My heart was almost leaping out of my chest at his god-like handsomeness, and I nearly keeled over from swooning so much when he stood up to join me.

His delicious, heavily-accented - country unknown - chat up lines were sophisticated, and one was like a giggling school girl, swooning and sighing as his chocolatey, velvety voice stirred up one’s desires to new levels…

Before I became a complete and utter gibbering wreck, I had to briefly excuse myself to the ladies room, where I could calm down, freshen up, mop my fevered brow, and get my breathing back to normal. I was all of a fluster!

By the time some semblance of decorum had returned to my composure, on returning to our table I discovered that my latest potential conquest had ‘done a runner’, and was nowhere to be found.

According to my new found friend - the head bartender - my ‘mystery man’ had left with a twenty-something blonde bombshell draped around him, promising him a night to remember. Apologies for the language my darlings, but what a complete and utter cockwomble!

Harumph!!! For the record, he, and other potential suitors, would do well to remember that ‘age and treachery will [always] triumph over youth and skill!’ If it was a memorable night he was after, with the experience and knowledge that this gal has acquired over the years, I would have destroyed him. Not that self-praise is a recommendation. Well, not always...

Not one to be bitter or to harbour a grudge, I sent my personal steward to discreetly find out where he was staying so that he could deliver a warning message, to the effect that ‘should I bump into him at any time during the remainder of this journey, he would do well to start running in the opposite direction, otherwise there might be another murder on the Orient Express!’

Fortunately, I came to my senses and tore up the note. I, Lady P would not become a bitter old shrew; I would shake off this rejection, focus on the positive, and leave the mystery man to wonder ‘what might have been’.

At that particular moment, one had no idea what the ‘positive’ could possibly be…However, when one retired for the night, with a generous cognac nightcap, and some channel hopping on the TV, my crushed hopes and disappointment would soon take a thoroughly unexpected U-turn, for the better!

Idly flicking through the TV channels I happened upon the news - the screen was filled with none other than last month’s fantasy ‘frolic’ - Tom Cruise!! Who would you believe it, was currently filming the latest Mission Impossible in Venice?! And where was I heading? VENICE!!!

Now my darlings, if you cast your minds back to September’s travel tales, you will recall that I had a hot and heavy affair (albeit in my head) with the fabulous actor as we travelled to France in order to rescue Daddy from alcohol poisoning, and to safely return him to Britain.

Perhaps now one’s dreams would come true, as I would soon be arriving in Venice and taking on my very own Mission Impossible. How to snaffle a date that would lead to a wild night of passion with the gorgeous and agile Tom...Oh be still my beating heart and febrile imagination...

There are plenty of canals I would like Tom to explore with me in Venice. Perhaps I could persuade him to take a gondola ride with me? It’s worth a punt, no?! Pun thoroughly intended!

These thoughts, and MUCH more, monopolised the rest of the journey, wonderfully aided and abetted by the clackety-clack, rocking motion of the train as it rattled through the tunnels…

The following morning I started to plot my strategy of how one could get one’s manicured mitts on Mr Hot Stuff, and re-enact those lustful evenings played out in one’s vividly naughty imagination, all whilst devouring the delicious continental breakfast, and languidly licking the buttery croissant’s remains from my fingers. Meanwhile, I shall content myself with devilish thoughts of sinking my pearly whites into a fresh cream horn at my next destination. There cannoli be one victor...

And now my ravishing readers, this is where I shall leave you lingering until next month, where I promise faithfully that I will reveal ALL.

With the ongoing travel restrictions, this gal has had to be realistic about her horizons - romantic and otherwise.

It is with a heavy heart that I have relinquished any hope of ever uniting with my beloved ginger prince. And truth be told, he does seem a little lacklustre - even to my rose-tinted eyes - these days.

Perhaps this incurable, besotted romantic has finally ‘wised up’, to use a Daddy turn of phrase…Gone is the cheeky chappy, with a mischievous glint in his eye. Did I fall for an illusion, or a delusion even?!

And Daddy pointedly said that the ginger one has become quite the bargain basement ‘rent a quote’ royal, popping up anywhere that will have him, to scrape a living. Perhaps that’s sour grapes on Daddy’s part. That, and the fact that the heating has gone belly up (again) on the family estate; he’s already been on the phone to Sotheby’s to see what a few family heirlooms will fetch at auction.

With this in mind, I’m sure Daddy will be more than happy to support me in my latest ‘impossible mission’. After all, Hollywood royalty is far more ‘solvent’ than your standard royalty. Or as Daddy is prone to say, “this family estate is a bloody money pit - show me the money!!!” I think Daddy and Tom will get along famously. If anyone wants me, I shall be perfecting my mating call...