This lockdown thingummyjig is the most strange and curious thingummy!

I have been ensconced at the family home with zero party invites, no gala dinners, zilch red carpet events, and not even a shopping trip to Bond Street is on the horizon any time soon. Just one of those alone would ordinarily be enough to drive this gal to drink with another stint at the Priory if one wasn’t careful…

Not being the sort to let the grass grow under one’s feet, idle hands making mischief and all that, one has had oodles of spare time on one’s hands - being a resourceful soul, I decided to tackle the most arduous task known to man, woman and beast! sorting through one’s enormous collection of clothes, shoes, handbags and accessories. Talk about being all dressed up with nowhere to go or glow!

Now one is well aware that hoarding this treasure trove of items over the decades could be construed as sentimental, but there is method in my ‘madness’ of not wanting to let go of the past!

Rest assured my ravishing readers, there’s a LOT of money’s worth in this treasure trove, nestling at Mummy and Daddy’s country pile. Should it come down to the worst possible case scenario, i.e. Daddy cutting me off completely, then one does have an ample insurance policy courtesy of this stash of goodies, which should see me through the hard times…

Or at least until one can snaffle a rather gorgeous, fully-loaded, well-endowed husband - oh do get your mind out of the gutter, by that I mean someone who is packing in the wallet department. What on earth do you think I meant? Perhaps it’s cabin fever which is making me trip over my choice of words…

Or maybe it’s the demon drink talking. One has been watching the clock of late, waiting until it’s acceptable to pop the champagne cork. Could one be turning into a lush? Heaven forbid. One is not alone though, as when one’s friends partake in a Zoom session, each and everyone of them has a glass in their hands, and an ice bucket within earshot. Without exception, they all start the conversation by saying they’re on airport lounge time - apparently all bets and timezones are off there, making it acceptable to partake no matter what the hour! 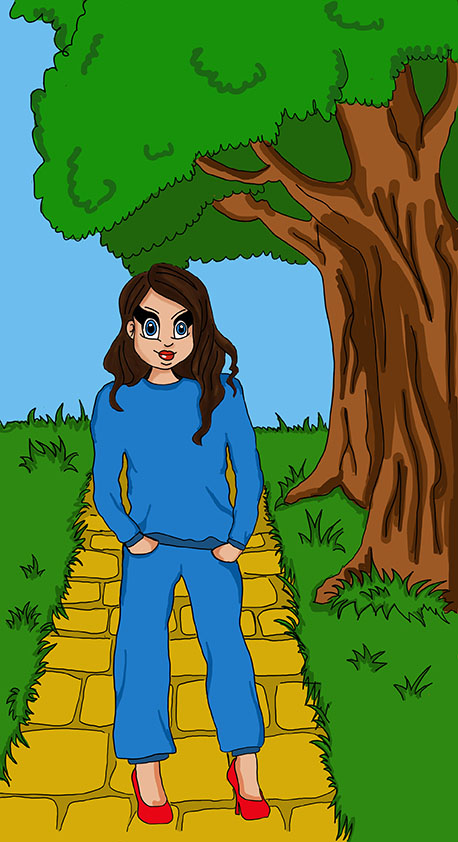 Back to sorting out and cataloguing my enormous cash cow of a closet, where I happened upon the most gorgeous pair of ruby, crystal-encrusted stilettos - they featured heavily during my ‘the lady is a vamp’ phase. Oh how they sparkled - one was mesmerised. They were just crying out to be worn, even though one was dressed in yet another comfy lounge suit - they would be just the ticket to pull me out of my midday slump.

WIth my slippers slung without a backward glance, it was on with the ravishing ruby reds! They looked more ravishing and decadent than I remembered, so it was with considerably lifted spirits that one decided to sashay along our hallowed halls which double up beautifully as a runway!

Jauntily strutting my stuff with the best of them - move over Naomi, there’s a new model in town - I strode confidently as if to the manor (and catwalk) born! I was so giddy at being reunited with my ruby reds, that I didn't see our pooch’s toy on the carpet. Before I could even yelp ‘Toto’, I went full Cirque du Soleil, flying through the air, landing in an unseemly heap on the floor. For a final flourish, I banged my head on the banister, seeing more stars than an astronaut on a space walk!

As I came to, I could hear a loud knocking on the door. Gingerly, like a new-born foal, I stood up. However, one prides herself on ‘grace under fire’ and one is a professional heel wearer, so there was no way these little beauties were coming off any time soon.

Prowling like a model in search of her next billionaire benefactor, sorry, I mean boyfriend, I reached the door, flinging it open with gusto, only to be startled by the munchkin standing before me...Oh dear Toto...I don’t think we’re in Blighty anymore!

Was this my childhood dream come true? Had I gone over the rainbow? This munchkin chappy was asking me to help him find the wizard. One was about to reply that maybe he might like to ask the old witch who lived in the woods, when I remembered that Mummy’s big sister had temporarily moved out to stay with relatives in the next county…

With a semblance of composure restored, and remembering where I was, in that instant I knew that my journey down the yellow brick road was about to begin…

Now all I needed was the good witch to help me on my way. When I enquired as to her whereabouts, a lot of giggles floated up from the other munchkins hiding in the bushes. Apparently, due to cutbacks in Oz, the good witch had unfortunately been made redundant, with all her duties passed on to the bad witch. Oh dear, that might be a tad problematic going forwards.

Oh well, no time to dwell. It was time to follow the yellow brick road with the munchkins in tow.

My first encounter was with a rather unkempt looking gentleman, lounging in the roadside’s hedgerow. We exchanged a few pleasantries, and despite seeming to be not overly smart - sartorially or intellectually - we invited him to join our merry band. However, one always appreciates the company of a strapping young man. And his line in chat soooo reminded me of my ginger prince...

My second encounter was with a metallic-looking chap - painted silver he was, from head to toe - awkwardly posing on the side of the road! Was he trying to earn a little money by pretending to be one of those living statues?

One was a tad confused until he said that his girlfriend had thrown a tin of silver paint over him, saying he was a poor man’s Goldfinger and heartless to boot! His crime? Apparently he wasn’t very good with a chopper! Oh dear! Good manners stopped me from asking if he was talking about an axe, a helicopter, or anything else for that matter… Anyhow, the poor soul was heartbroken, so we decided that he could tag along too.

Our third encounter was with the most grizzly, hairy man one has ever set eyes on. He made Jason Momoa look positively peachy and fresh faced! He was huddled under a tree, and there was absolutely no way could I leave this poor chap to fend for himself. The poor love could barely see through his curtain of hair and was absolutely terrified of everyone and everything, including his own shadow.

Just wait until the wizard could wield his scissors - a good haircut can do wonders for one’s confidence, and heaven knows there will be quite the stampede when lockdown is lifted, and our locks can be uplifted!

Things were going rather swimmingly along the yellowing road, when that darn bad witch turned up on her broomstick to try and rain on one’s parade. Gesticulating wildly like an espresso-fuelled octopus, issuing dire threats of fire, poison and damnation, before despatching a flock of flying monkeys to deal with us if we didn’t turn back, while screeching “go back to where you bloody came from” if I recall correctly, was her parting shot. How rude!!!

Well I had news for her. One has been dealing with nasty bitches, sorry I meant witches, since a very young age. Years of defending oneself in boarding school were about to pay off handsomely. Pfffft, and there’s Daddy always saying he wasted good money on trying to educate me!

After insults were thrown back and forth - we’re talking Fendi handbags at dawn dahhhlings - none of which can be printed for legal reasons and to preserve one’s reputation, she had the sense and good grace to realise that I was NO pushover. My yoga instructor and personal trainer can testify to that! More money well spent, so take that Daddy! Straddling her broomstick, off she flounced, flying away in a state of high dudgeon, leaving us to carry on with our pilgrimage to meet the wizard.

Before I digress (or gloat) further, and as much as I love to go a’rambling, let’s move swiftly on to the later stages of our pilgrimage...We finally arrived at the wizard's home and what a wondrous sight it was. A glorious emerald castle, glinting with golden turrets. Oh how I love a glistening turret - what gal doesn’t!

After some robust negotiations - ok, let’s call it what it is, flirting - with the guards at the door, one managed to inveigle an audience with his wizardship, where I put forward my and my trio of travellers’ list of requirements.

The wizard, who was decked out in more bling than a rapper’s significant other, read our list, but was barely able to conceal his mirth and bemusement. The last time I heard someone laugh quite so insanely was when I asked Daddy for an increase in my allowance.

Personally I couldn’t see what was so funny about requesting an eligible prince who was loaded and boasted a fabulous six pack! A gal can still dream, can’t she?

Surely there must be a few spares to the heir kicking around the place? What sort of magical land was this? Did they have a national shortage? The more angry and impatient I became, the more the wizard laughed, until he finally stopped only because I had stomped my feet so loudly, with the ruby red heels scraping across the marble floor, making the most excruciating noise - just imagine the absolute worst of the Eurovision acts, and throw in an injured cat as lead singer for good measure...

Eventually, the wizard recovered his composure and sneered “Listen Lady P, do I look like a f*****g genie?“ How terribly rude! And unchivalrous! Well I was not going to stick around to be spoken to like that, so off I flounced, but not before tripping over the step, landing on the yellow brickwork, with everything going fuzzy...AGAIN!!!

The next thing I hear is Daddy shouting, “Oh for the love of God Dita. How many times have I told you not to use the corridors as a bloody fashion runway. That’s what the orangery is for! When will you ever learn?”

Bam! And just like that, one was back in the room, dazed, confused and sporting a large purple bump on one’s forehead. This would require some lashings of TLC** from Mummy as one was feeling quite sorry for oneself.
So for now, in the words of my other favourite queen, Elton John, “goodbye yellow brick road”... I bid my ravishing readers farewell until next month.

**By the way, TLC is our family’s latest ‘medicinal’ concoction. It’s a Turbocharged Lockdown Cocktail. Ingredients?? Pretty much whatever is languishing in the drinks cabinet, served on the rocks, in a martini glass!

***Note to Team Heaven gals - my quest to be queen of quarantine hit a bit of a bump this month - but rest assured, I shall dust myself off and be raring to go on whatever other little venture or adventure you would have me do - stay safe girlies - mwah!