Even though the lockdown has been ever so slightly eased, there hasn’t been an awful lot of places open to tempt me to venture out of our country pile. Not even the charming village bakery with their new ‘pastries to go’ range could coax me out of my self-imposed Corona quarantine. However, their home delivery service is an absolute charm - especially the driver. One gets to enjoy an uninterrupted, aesthetically-pleasing view on one’s doorstep in the morning - socially-distanced of course - sets this gal up for the day, and that’s even before she’s sunk her teeth into a flaky cream horn for elevenses…

Now where were we...

When I spoke to our fabulous Lady Boss (Emma), she told me that this month’s photoshoot was inspired by William Shakespeare’s ‘A Midsummer Night’s Dream’, which is all about love - requited and unrequited - and set in a forest with magical fairies.

I must say that this inspired me immensely, so off I trotted, to the library, to retrieve a much-loved and well-thumbed book which Mummy used to read to me when I was a little girl. ‘The Magic Faraway Tree’ by Enid Blyton.

Perhaps - to any of the culture snobs out there - it’s not in quite the same league as Shakespeare, however, in one’s defence, it is set in an enchanted wood with its very own magical folk; so as far as I'm concerned they’re pretty much the same thing.

With the book firmly stashed under one’s arm, and fortified by that morning’s cream horn, it was time to raid the kitchen, pack a little picnic, and retreat to the great outdoors to spend a lazy afternoon reading.

Thankfully Daddy had remembered to charge up the golf buggy, so one commandeered it before Daddy could go rampaging around the estate to shout (and shoot) at the walkers again, and I set off to find the perfect picnicking spot.

I drove deep into the woods where I spotted the most magnificent tree which looked eerily similar to the one on the cover of my book.

With the picnic unpacked, a soft cashmere blanket to sprawl on, and the obligatory glass of champers being quaffed, it was time to take a trip down memory lane and re-discover the folk of the magic faraway tree.

Oh how I reminisced over the characters Jo, Beth and Fannie, Moonface, Saucepan man and Silky the fairy, the Angry Pixie, Dame Slap, and their oh-so-fabulous adventures where a different land would appear at the top of the Magic Faraway Tree.

As I became increasingly immersed in my nostalgic magical adventures, one’s eyelids began to feel rather heavy. Could it be that I had forgotten to put my spectacles on, or had I consumed a little too much champers?

Suddenly, there was a loud thud which jolted me from my sleepy state. I blearily opened my eyes; as they slowly came into focus, they were met by the most astonishing sight… 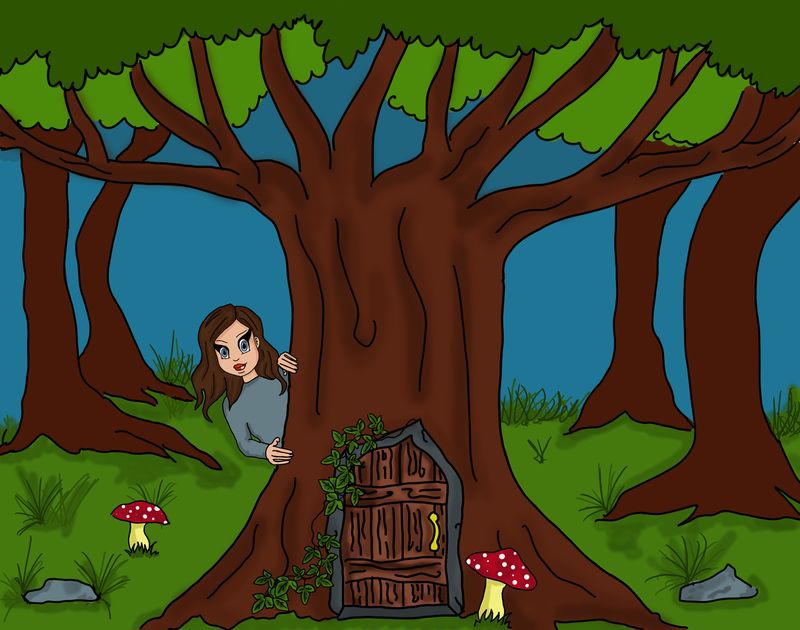 The towering tree which I had sheltered under - well, its trunk now had a little door complete with knocker which one felt compelled to knock. Loudly. The door gave way and slowly opened, where I was met by the sight of an angry looking little man, hunched over.

Emboldened by my Dutch courage, I didn’t hesitate to ask “are you a goblin Sir?”

Sheer descent prevented me from asking if the wood was all his...

Anyway, after his ill-tempered outburst I managed to sidestep his contorted figure and little abode, and started to scale this magnificent tree. Fortuitously, the branches swirled and gnarled to form a sweeping staircase so I could ascend with more than a modicum of elegance.

As I climbed higher and higher, I made the acquaintance of lots of strange pixie type folk, all of whom were happy to stop and chat, saying how they were excited to see what land would appear at the top of the tree today.

Now this stopped me completely in my tracks as my champers-addled head slowly put two and two together, and came up hopefully with a four! Was this the actual Magic Faraway Tree? Was I about to visit the land of my dreams? AND have the adventure of a lifetime?

With a spring in one’s step, I climbed higher and higher, egged on by a man with a head which was, quite literally, shaped like an egg. All very strange, and it also made me want to dunk a soldier, so to speak…

Hovering just above me were thick clouds, and poking out beneath them was a ladder...where’s a strapping fireman or a ginger prince to give you a leg up when you need one? Oh well, it was left for me to brave it alone, or so I thought, until I looked down and saw the tree’s tenants hot on my heels.

One had well and truly hit the jackpot. Gucci-Land had made an appearance. Had I just died and gone to fashion heaven? It felt like all one’s Christmases and birthdays had come at once!

I hoisted myself up, and gazed around me with a glazed delight, drinking in one’s surroundings. I felt more than a little giddy. I mean, who needs alcohol when the rush from fashion gives off such fabulous endorphins like these?

One felt like I was at a country fair/bazaar mash-up! The trees’ branches were bedecked with handbags, mannequins in every direction swathed in their sartorial finest, flower beds adorned with watches, jewellery and other twinkling trinkets. Hat stands doubled up as lamp posts, with all manner of hats jauntily perched upon them, and acres of bunting made from jeweled sunglasses, glittery scarves and sarongs, and the accessory du jour - bespoke, bejewelled Covid face masks - all gaily glinting in the summer sun.

I was completely mesmerised, until my teeny tiny trance was burst by the loud booming voice of a stern matronly woman in a police style uniform, when she started to bellow out orders of do’s, don’ts and whathaveyous!

From what I could gather in my semi entranced state, one was allowed just the one shopping basket - and when an item was put into the basket it could not be removed and exchanged for anything else. Hmmmmm! A challenge for most mere mortals, but this was where one’s awesome shopping skills would come to the fore. I had been training for this moment ALL my life. Challenge accepted!

And so with great gusto and aplomb, I went about my way, taking extreme care in this cornucopia of commerce, and being exceptionally meticulous with one’s shopping choices.

Naturally, one wanted to abandon all decorum and go on a mad trolley dash, however I did not want to rock the tree and get thrown out, so one adhered to the rules. I had to briskly eliminate ALL memories of a misspent youth, with flashbacks to skipping lectures, and watching endless episodes of Supermarket Sweep. When you hear the beep...

Thankfully, that bellowing Miss Bossy Knickers had made NO mention whatsoever of a time limit, but that still didn’t stop me from making a mad dash for the tree so I could cram in as many handbags as humanly possible; I rather strategically left sufficient room for a stash of sunglasses, diaphanous sarongs, and jewellery.

My cup of good joy and bountiful shopping basket were truly overflowing, but alas, it was soon at maximum capacity. With a heavy heart - and even heavier shopping basket - it was time to bid a fond adieu to Gucci-Land and get my not-so-little haul back to Mummy and Daddy's house pronto, before any of those highly-prized acquisitions could escape one’s clutches.

I reached the ladder in no time to start my descent. Unfortunately, in my indecent haste to go down faster than a thirsty Hollywood Z-lister on a film producer, I caught my bloody stocking top on a branch and started falling, falling, falling…followed by screaming, screaming...Gucci...Gucci....Gucci…

The next thing I know, as I came to my senses, Daddy was tapping me on the shoulder, muttering under his breath about how women can’t handle their bloody alcohol and should leave the drinking to professionals and the ‘gentlemen of the road’. Who’s he to call me a tramp?! Pffft!

I would have loved to have retorted with a pithy comment, however, when Daddy is p***ed off with me, he can be rather petulant and downright mean by stopping one's credit cards. So, rather reluctantly, I bit my tongue, smiled at him, and sighed dolefully. Gosh - the things I do to keep the peace!

Anyhow, this uncharacteristic subservience was nothing compared to the devastation I felt when I realised that it had all been but a mere dream, and that one was NOT the proud owner of a basket of free Gucci goodies. Sob!

Thus, it was with a furrowed, Botox-free brow, that I headed back to the house on the golf buggy, where I could lament that I’d not been to Gucci-Land; nor did the Magic Faraway tree exist after all. In fact the only thing I could do to console myself was to pour myself a stiff drink, get out the iPad, and start planning what I would buy when the shops did eventually reopen.

By the time the magazine goes live on 15th June, and you are reading about one’s latest Corona chronicle, the shops will - fingers crossed - have reopened and I, Lady P will have already maxed out one’s credit card to the absolute max. You know me by now. I am a tremendously altruistic soul, and one needs to contribute to the struggling global economy…

Oh Gucci, I’ve missed you so much! If a gal can’t get to Italy, then Italy will have to come to meeeeeee!

Whilst one’s passport is up to date, and one is raring to go, if you know of any retail outlets who would like me to be a guinea pig for their store layouts in exchange for gifting me a few goodies, then please do volunteer my services! You can’t find a more expert shopper than little ol’ moi!

I stand ready to serve Queen, country and commerce!