This month your award-winning travel/events correspondent has been sent to party with the luvvies at the Venice Film Festival in Italy.

Now one isn’t usually fond of partying with ‘film folk’ as those ‘thesps’ have a rather over-inflated sense of self-importance, and I just simply can’t take people seriously when they constantly pretend to be someone else - I have my hands full enough when cousin Jacinta forgets her meds and causes havoc with her various alter egos - it’s all terribly unnerving and one can never tell whether they are being genuine, or if they are simply full of poppycock.

I have had the good fortune to have visited Venice on many occasions and it is quite simply divine. However, for the benefit of those who haven’t, and being the consummate, cultured professional that I am, I shall give you the lowdown on this historical gem. 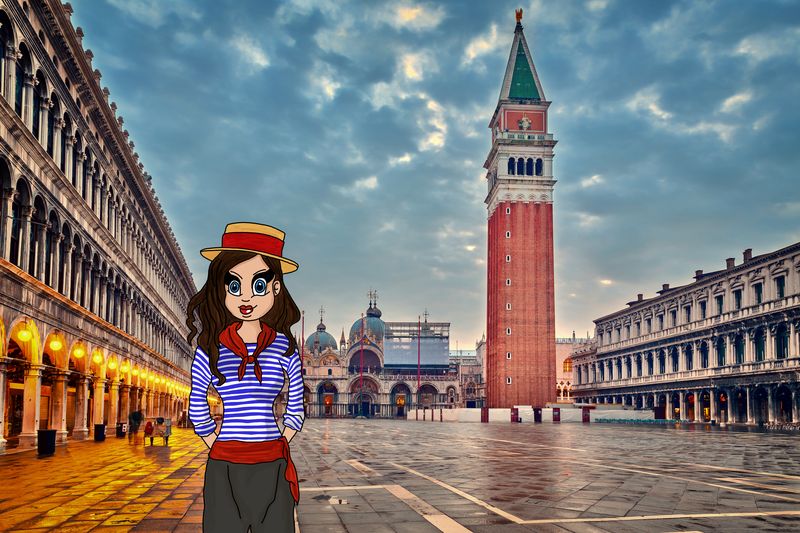 Venice is the capital of northern Italy’s Veneto region, built on more than 100 small islands in a lagoon in the Adriatic Sea. It has no roads, just canals - including the Grand Canal thoroughfare - lined with Renaissance and Gothic palaces. The central square, Piazza San Marco, houses St Mark’s Basilica, which is tiled with Byzanite mosaics, and the Campanile bell tower offers spectacular views of the city’s red rooftops.

With the travelogue out of the way it’s now time to do what one does best - shop, schmooze and party...

First stop was the Venice Film Festival and that most daunting of socialite tasks: walking the red carpet. One would think that being a veteran of so many, that one would be relatively relaxed about the whole shebang; however, it really is a scary prospect, and one which I must confess could only be overcome courtesy of a (alcoholic) ‘heart starter’

As a fitting homage to my peachy prince, there was only one place for this gal to get some ‘Dutch courage’. Harry’s Bar! And to imbibe a signature Venetian cocktail - a bellini. This cooling fortifying elixir is made with peach juice and prosecco. Pure peachy fizzing perfection. Like moi!

One didn’t want a repeat of one’s humiliation at a previous luvvie-fest, shrouded in a cloud of ‘eau de cognac’, asking all and sundry for directions to the ‘casting couch’. Mr Spielberg was terribly gracious and understanding when he spoke to Daddy’s lawyer. Mr Tarantino less so... 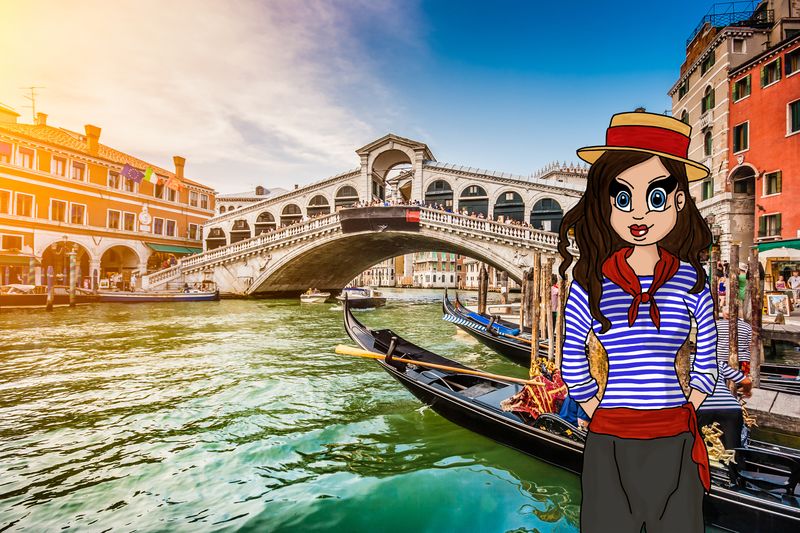 Suitably ‘watered not slaughtered’, suited and booted, looking rather ravishing even if I do say so myself, one sashayed down the carpet, posing, pouting and flirting up a storm for the paparazzi. Having learnt the hard way, one now does one’s best to keep them onside, especially if you don’t want to feature on the Daily Fail’s ‘sidebar of shame’. Again!

I dazzled them with my pearly whites, weaving and waving my way through the crowds, doing my best to avoid any exes, which as one advances through the years, is pretty much ‘mission impossible’.

Thankfully, this event’s mission was pretty straightforward in my latest romantic quest (tho with more than a little added pressure from Daddy it must be said - as I left for the airport he reminded me that winter is looming and ‘this bloody house won’t heat itself you know, best foot forward and all that darling’).

Daddy helpfully suggested I steer clear of those ‘bloody self-absorbed starving luvvie creative types’ and set my sights on some ‘rich Italian count’, well I’m pretty sure he said ‘count’ #FreudianSlip? And Uncle Freddie was positively salivating when he said he likes his men, how he likes his coffee - rich, dark, hot, strong and Italian! Freud would have a field day with our family!! 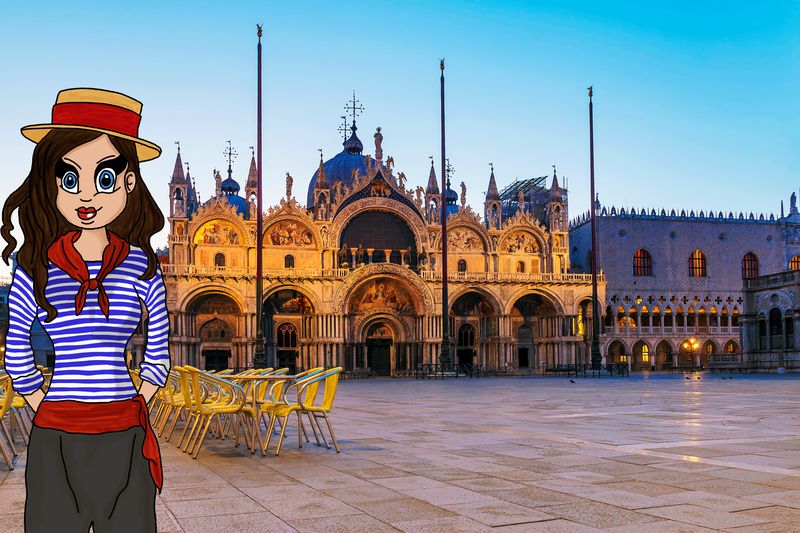 As the evening progressed so did the number of candidates vying for the position to be one’s ‘Italian stallion’. Being an adept rider and horsewoman, I am pretty confident in my ability to spot a worthy steed from afar, and who can put the ‘sire’ into desire…

It’s safe to say, one’s little black book was soon chock a block with Italian connections to follow up.

And don’t you just love that saying “when in Rome”? Well Venice is close enough being in the same country. One partied like a true Italian, swept up in a delirious swirl of la dolce vita, and that was even before being taken to discover the designer delights of Dolce & Gabbana’s store in the palazzo, by one of my many suitors.

One indulged in pizza, pasta, gallons of gelato and Grappa, chased with copious amounts of Campari and Aperol! These Italian chaps know how to show a gal a good time, and thankfully they embrace the curves of the female form as well as their Ferrari hugs the curves of their roads! I was charmingly told on several occasions that I should come with a warning sign: ‘Dangerous Curves Ahead’...

Now that one has adopted the mantra of ‘calories consumed outside the UK don’t count’, I throw myself headlong into savouring all that is put in front of me, yet secure in the knowledge that I will need every last ounce of energy to keep up with these Latin lotharios.

A particular highlight of this trip was a romantic gondola ride along the canals with the current love of my life - my new Prada handbag - it’s simply to die for darlings and so versatile, it just compliments everything and has been by one’s side for most of the trip. I don’t know which has the smoothest hide - my handbag, or my gorgeous gondolier! 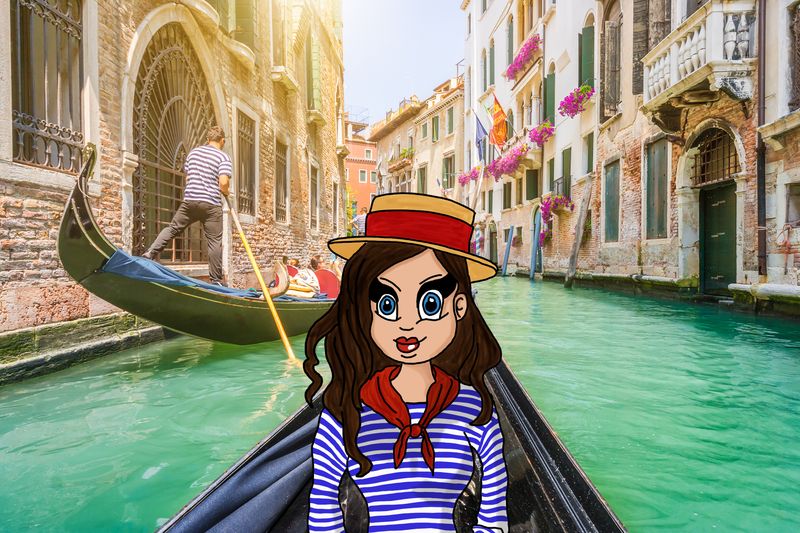 The gondola ride allowed me to soak up the late summer sunshine whilst lazily sightseeing. One looked simply splendid, posing in front of the famous Rialto Bridge, which was promptly uploaded onto one’s Insta.

Did I mention that my gondolier was a rather fine figure of a man? Lightly rippling biceps, taut glutes, and strong hands, masterfully wrapped around his pole which he used to guide and glide us through the canalways. We weren’t anywhere near the Bridge of Sighs at this point, and I was sighing like a lovestruck teenager! He was nothing short of magnificent and was quite speechless when I compared him to Michelangelo’s famous marble statue of ‘David’. Only a lot harder.

Another sight to take my breath away was Saint Mark’s Basilica with its gilded domes and gold ground mosaics, not for nothing is it known by the nickname Chiesa d’Oro (Church of Gold); and you know how one appreciates a bit of bling? 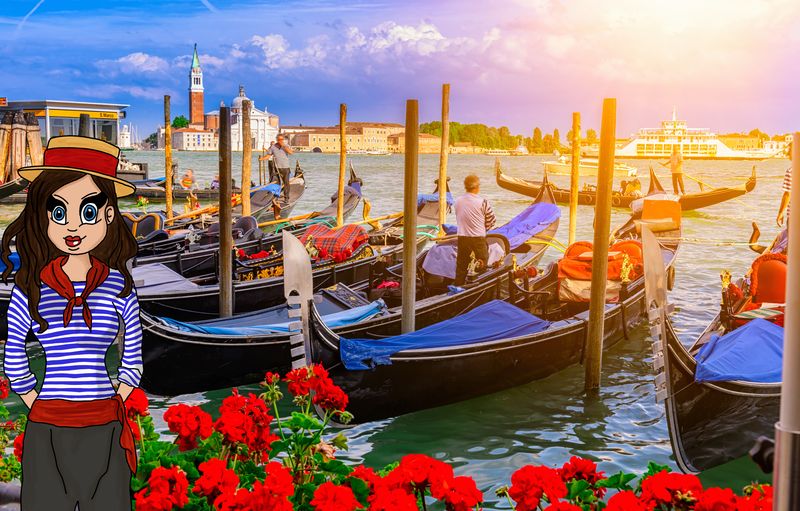 This was a timely reminder that one needed to hot foot it to the shops and bag some Italian bling before flying home. I did one last final sweep, making sure I visited my own personal ‘churches’ of Gucci, Prada and Dolce & Gabbana. All worthy contenders for Italy’s top designers and just begging to be worn - perhaps those lovely gals at #TeamHeaven will send me on a ‘Roman Holiday’ a la Audrey Hepburn?

If nothing else, they will always be a marvellous souvenir of my very own ‘Italian job’. I didn’t blow any bloody doors off, but I did try my hand at blowing some Venetian glass. Not a euphemism. Much...

My Italian escapades have come to an end and it’s time to bid ‘arriverdeci’ to the beautiful, magical city of Venice,

Another triumph ladies - mille grazie for this month’s assignment. I was a tad disappointed not to get the NY fashion week, but after seeing my beloved ginger prince’s other half was in town that weekend, your sources are clearly well-informed and best for all concerned we’re not in the same city…

If you are accepting requests/pleas for future assignments, thought I’d mention en passant, that a certain peachy prince is heading to Southern Africa shortly with she who must not be named. Tho after their expensive eco-unfriendly jetsetting this summer, small wonder they’re known in our circles as ‘Woke and Broke’, so maybe he’s not quite the lucrative catch which would make Daddy proud. Hmmmm. Any suggestions on lucrative locations for potential paramours, are always gratefully received! Can’t wait for my next thrilling assignment. As ever, passport poised and raring to go.