My sweet-talking of those darling girls at #TeamHeaven is working wonders.

One has been tasked to bask in the tropical and exotic climes of Thailand (formerly known as Siam) and a welcome reprieve from the grey skies of home. Just don’t get me started on the black cloud which follows Daddy around every time the mail arrives...

On arriving in Bangkok the excitement was palpable as they prepared for the coronation of their new King. In a rare indulgent moment of daydreaming, I thought of being my ginger prince’s plus one when his daddy ascends to the throne…

Anyway. I digress. There were days upon days of celebrations and parades; and you know me - I LOVE to party. And a party with royalty really sets my heart a’flutter with palpitations and anticipation. Could it be that I might actually find myself an eligible prince at last? 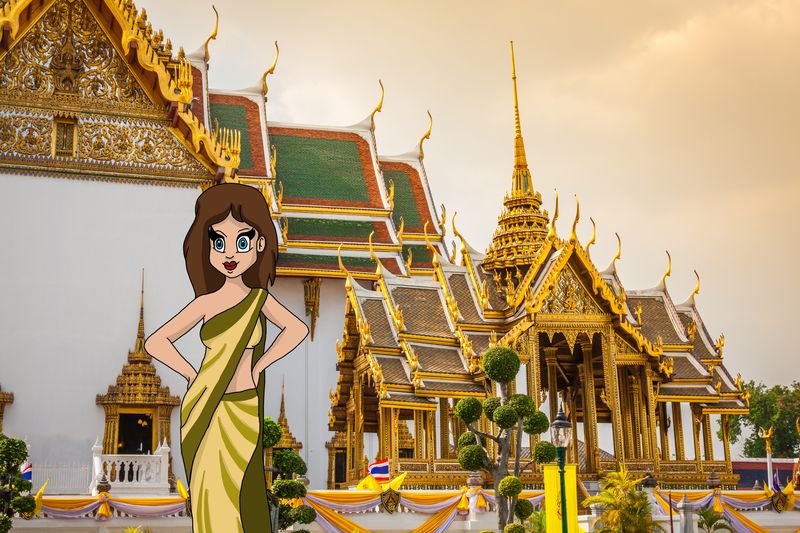 Had I arrived a week or two earlier, I might have stood an outside chance of catching the eye of the main man himself. Apparently he married for a fourth time a few days before being crowned. One must really up her game and subscriptions to international royalty’s court circulars and magazines if one is to ever progress through the gentry! Daddy will be furious at this missed opportunity.

Forgive me while I digress. But I cannot pretend that I’m not a little shaken to learn that Ginge and Cringe (as is our wont in Blighty to call them) are new parents - tho I will have to see the baby and its birth certificate with my own eyes to believe it. Fortunately, ‘dissing’ the monarch and her relatives in the UK doesn’t carry quite the same punishment and imprisonment as it does in Thailand! God Save The Queen. And King!

After much coronation carousing, it was back to downtown Bangkok in all its vibrancy. The city is packed full of ornate temples - one stand out feature is the Emerald Buddha which is worth a small fortune. It is adorned in jewels and worshipped by many. One is a tad jealous - green-eyed even - of something or someone being an object of such desire and importance to so many people. I just want to be loved and adored, but doesn’t everyone? 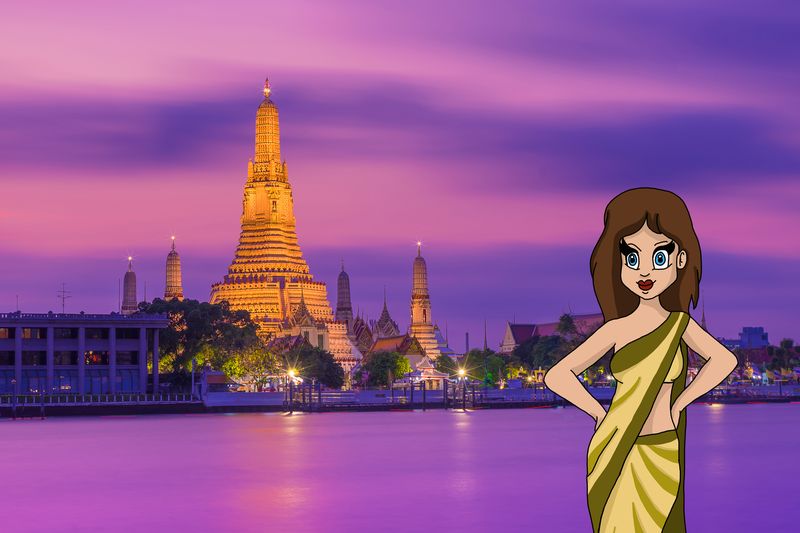 Next on the agenda was a boat trip on the Chao Phraya River, where one ended up in the most delightful river market. Now this was a first for me. I’ve visited many markets in the past, but never have I been to a floating market, nor have I ever bartered so hard while trying to keep one’s balance. Thankfully my stint as a yacht girl around the Greek Islands paid off. Daddy would be so proud. But less proud to find out how I learnt to tie those seafaring knots so well...

On the journey back to one’s hotel in an exhilarating tuk tuk ride, we passed the Grand Palace which quite frankly puts old Buck House in the shade. It has the wow factor and there’s more gold per square inch than in Fort Knox! And almost as much as a rapper’s girlfriend I’m reliably informed. Sigh! One day my (Fresh) Prince will come...

The evenings and nightlife were simply out of this world, spent with my newly acquired gaggle of uber-talented girlfriends and artistes. They remind me of the days (and nights) where I briefly flirted with pursuing a burlesque career, where I shadowed the fabulous Ladyboys of Bangkok as they toured Europe. I have yet to meet anyone better at the art of maquillage than those gals. 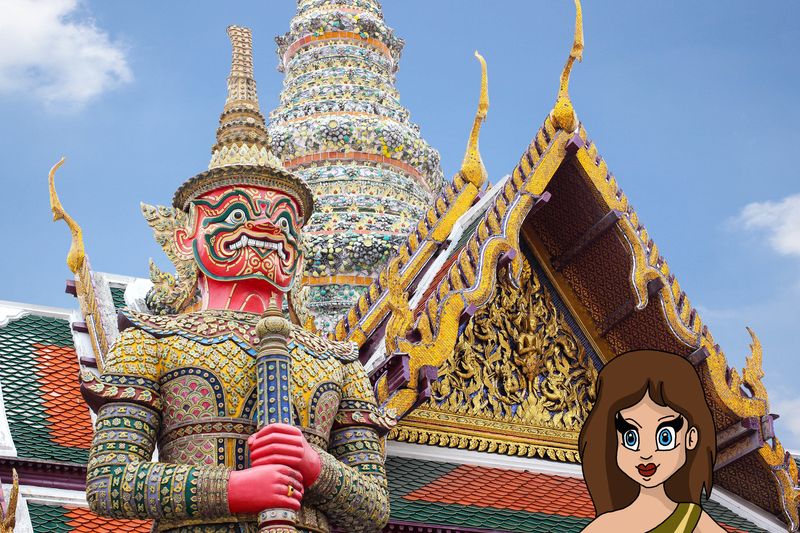 They divulged ALL their tips and secrets of the trade, and my darlings, some of those tips and secrets were surprisingly bigger and better kept than others, if you catch my drift…However, my lips are sealed. After all, I am the soul of discretion. And misdirection…

With Bangkok done and dusted it was time to dig out my finest Melissa Odabash and head to Khao Lak on the coast to indulge in one of my favourite pursuits - sipping cocktails, whilst relaxing on a beautiful beach listening to the waves lap gently on the shore, with a little cultural sightseeing thrown in for good measure.

When I told a gin-sozzled Mummy I was headed to the coast, she muttered something about ‘Phuket?’ I told her there was no need to be so crude, and ‘it’ was worth the effort. I do wonder sometimes if Mummy was switched at birth and isn’t a proper aristo like me and Daddy.
Anyway, a James Bond-style speedboat trip to the Surin Islands was quite a fast and furious ride and rounded off with some tranquil snorkeling amongst the fishies in turquoise sea.

One even managed to spot Disney’s Nemo in his little anemone - it was such a spellbinding moment that I dropped my underwater camera, thankfully it was retrieved from the seabed by our impressive snorkeling guide. He had quite a phenomenal lung capacity, as I was to discover later that evening when he came up for air and proudly announced he could also breathe through his ears... 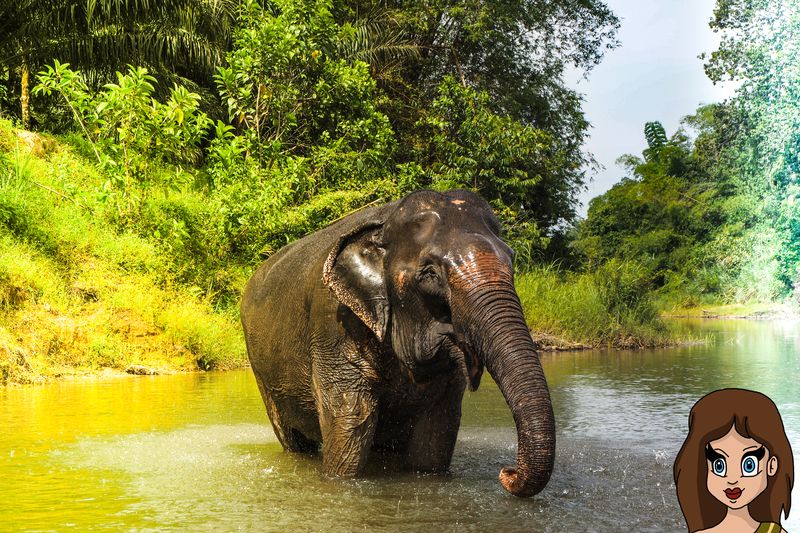 With the snorkeling ticked off the list it was time to visit the elephant sanctuary where one got up close and personal, and stuck in the mud. Goodness knows why it costs a small fortune for a mud bath at Champneys! I was rather shocked by just how hairy an elephant is. Almost as hairy as my spa masseur! Who knew?

We later walked to the nearby waterfall to rinse off - although it was a tad distracting to be heckled by some rugby ‘lads’ from Blighty, inviting me to do another round of mud wrestling with a trunk, and did I want to join them for the ‘cream of some young guy’. Can’t say I’ve seen that on any menu, and the travel advice does say about being extra careful when eating street food. So I politely declined their invitation.

Other highlights in Khao Lak have been learning to cook a traditional Tom yum soup, which was deliciously tasty and hot, just like our dishy chef! And a visit to the monkey temple where the cheeky little chimps tried to make off with my Gucci sunglasses. Thankfully I am freakishly strong - all those years of boarding school tussles and late night, scantily-clad dormitory pillow fights finally paid off. However, it was a tad disconcerting how little our games mistress did to intervene, yet how much she seemed to enjoy rolling around the dorm floor with us! 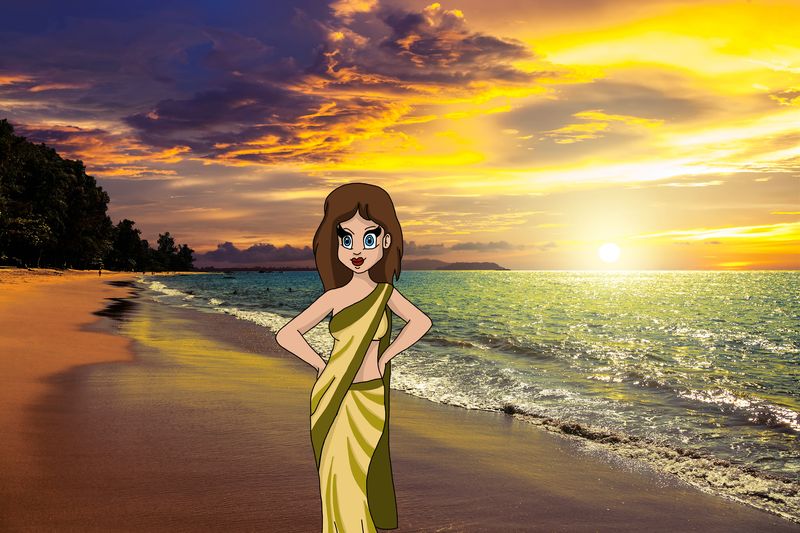 And so here I am, horizontal, on a sunlounger casually working my way through the cocktail list and enjoying the fruits of Thailand; and so this my darling readers is where I am going to leave you. Meanwhile, I am being serenaded by the not so dulcet tones of those rugby chaps. I know how their sort love a good sing-song.

I told them that the words to the Thai National Anthem are ‘Oo Wat A Nar Siam’ sung to the same tune as our National Anthem. They’re not terribly bright. I do hope the Thai authorities go gently on them and the Consul reaches them in time. I would so hate for them to get into trouble...

With love from the King and I ~ toodle pip my lovelies,

***Note to #TeamHeaven ~ thank you darling girls for a terrific trip.

N.B. Please keep mid-May clear in my diary - I shall be confined to my quarters for a few days mourning, while I photoshop myself into wedding pictures as an homage to my ginger prince and his first anniversary. A gal can still dream can’t she?!***