Greetings from Rio de Janeiro, Brazil, where one has taken part in the biggest and most fabulously extravagant carnival in the world. Those gals at #TeamHeaven have surpassed themselves after heeding my pleas last month for some much needed sunshine and glamour! Obrigada!!!

Whisked from the airport, I was catapulted straight into an explosion of colour, feathers, sequins, spectacular samba music and LOTS of exotic dancing - or should I say seductive swaying of one’s hips and lashings of shimmying!

Before the big parade, one took some last minute, intensive dance classes - darling Darcey recommended me *the* most divinely handsome dance tutor, Pedro. Alas his diplomacy skills were sorely lacking when he pronounced I had about as much rhythm as a drunken giraffe - how rude! 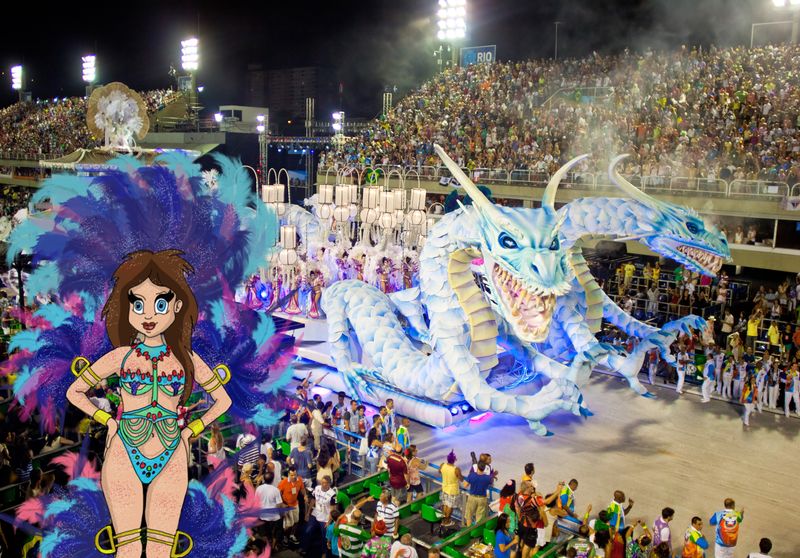 Thanks for that vote of confidence Pedro darling. I know I’m no J Lo or Shakira but surely one is not *that* bad? I know the hips don’t lie, but I do wish that he had!

Anyway, I was not going to let such a minor detail get me down and one’s confidence was significantly boosted at the costume fitting where my figure (and embonpoint) was favourably compared to the late, great Marilyn Monroe. Being thought of as such a beautiful bombshell did wonders for one’s ego.

At the risk of sounding a tad boastful, I looked rather fabulous bedecked in feathers in a myriad of colours, which were so bright that they would make a peacock jealous. As for the thousands of crystals, painstakingly applied by the finest seamstresses in Rio, they could have dazzled and knocked out the International Space Station - gosh, little old moi, visible from outer space.

The parade itself was a sensory extravaganza and so infectious. One’s body took on a life all of its own as soon as that samba music started up. Or maybe it was the several caipirinhas I’d had backstage with those devastatingly handsome samba boys?! They did ask me to bang their drums, or at least that’s what I think they said. The acoustics weren’t great, although they were very complimentary about mine... 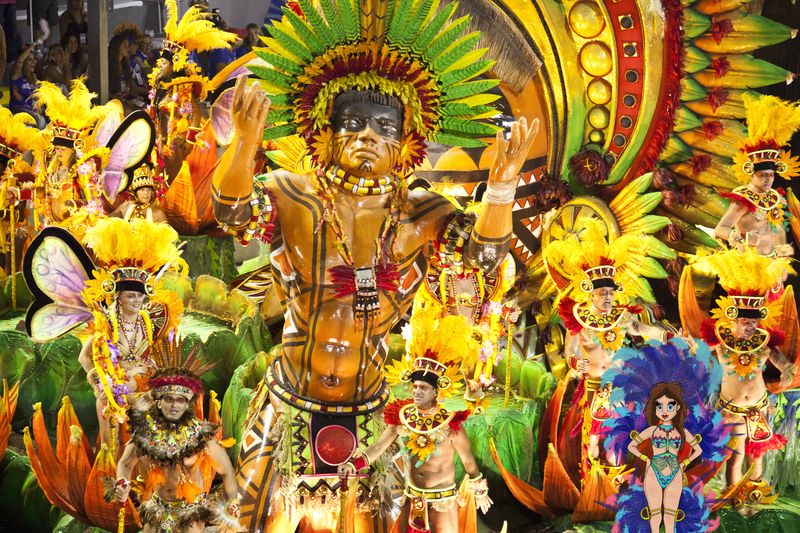 The crowds were cheering and whistling as the floats and dancers sashayed on by, each hoping that their larger than life creations would dazzle the audience and judges alike. Not that I’m overly competitive, I did want to be part of the winning team, to return home triumphant with a large trophy held aloft as I danced and dazzled my way through the arrivals hall.

Alas it was not to be. The competition was stiff (in more ways than one) with so many gorgeous floats with elaborate sets and costumes. Although on (much) closer examination I noticed that some weren’t even wearing any kind of costume - just artfully applied body paint, LOTS of glow and a smile! Can you imagine the reaction from my beloved family should I have joined that group? Daddy would have a fit. He’s still recovered from seeing some interesting ‘etchings’ of Mummy from her life drawing classes. He thought she would be standing behind the easel, not in front of it!!

We don’t know what upset him more. The etchings, or the enthusiastic plaudits signed by ‘all the guys’ and commendations on her ‘rack’. Mummy is still trying to convince him that they’re referring to her infamous ‘rack of lamb’ supper dish, but Daddy’s not having any of it. And lamb is off the menu for the foreseeable future according to cook... 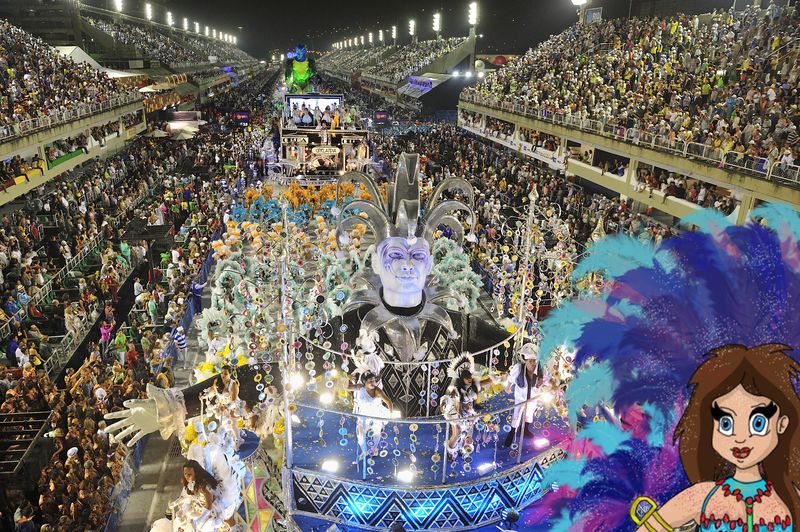 Anyway, I digress...Apres ski, oops (hopefully that’s next month’s column, fingers crossed!), I mean apres carnival, we celebrated in style at the hotel bar, where I got a teenie tiny bit tipsy on caipirinhas. Unfortunately nobody could dance as our tootsies were a little worse for the wear. However, never underestimate the fun you can have with a feather boa and a glint in your eye...

The following morning my head was throbbing as much as my feet, which threw an enormous spanner in the works, as one had a jam packed schedule of shopping, planned with military precision to maximise one’s time and efficiency. Now that that was out of the question, there was only one thing left that a girl with sore tootsies can do in Rio. And that’s sunbathe.

Unable to hot foot it to the beach, I had to make do with being taken there by one of the hotel’s golf buggies. Ignoring some awful Brit tourist lager louts cries of ‘there goes a hole in one’, I headed off to Copacabana beach in style.

Rocking up to the beach, singing Barry Manilow at the top of my lungs (I make no apology for being a ‘Fanilow’!) this budding Lola made quite the impact and was quickly surrounded by muscle bound men. Hunky and chunky as they were, I did (initially) find their rather strange orange hue and miniscule thongs (dental floss anyone?) quite disconcerting. This gal is more au fait with seeing her brother and his beachy chums sporting paunchy, pallid tums and baggy swimming shorts. 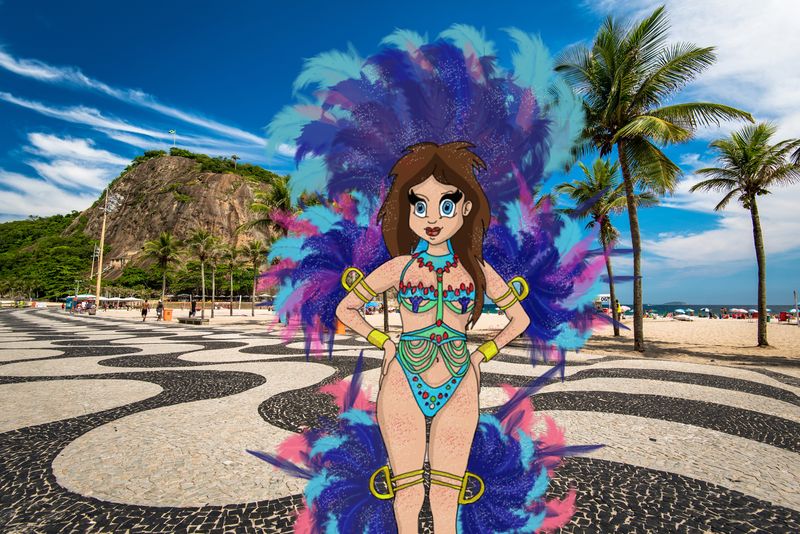 I came over all of a fluster at the sight of so many pert and peachy cheeks on display. All quite unsightly and unnecessary if you ask me, all that posing and flexing muscles - just ghastly. However, when in Rome as they say…or Rio in this instance, one needs to embrace the local culture wholeheartedly, and they were soon basking in the warm glow of my company as I regaled them with tales from good ol’ Blighty.

I must be a very good storyteller as they were hanging on to my every word, with their eyes chivalrously fixed firmly on my mouth, while my embonpoint heaved each time they took it in turns to make me laugh with gusto. I’m sure they thought I was some sort of film star. Easily done I suppose, especially when one has been likened to the delightful Marilyn Monroe.

That surely must be another sign? She starred in the Prince and the Showgirl. I do hope my ginger prince is reading this latest column. I know he has been making not so discreet enquiries about my previous jaunts. Ok, so maybe he hasn’t, but his legal representatives definitely have. Tho’ I don’t ever recall going stalking, so I have no idea what they mean. Unless it’s a coded invite to go deer stalking next time the Firm’s staying at Balmoral?!?

Anyway, I digress. I blame the heat and those swarthy chaps - not a single ginger amongst them. Story of my life...After a thoroughly wonderful day on the beach, it was time to summon the golf buggy to return to the safety and luxury of my hotel, to recover from my exertions. 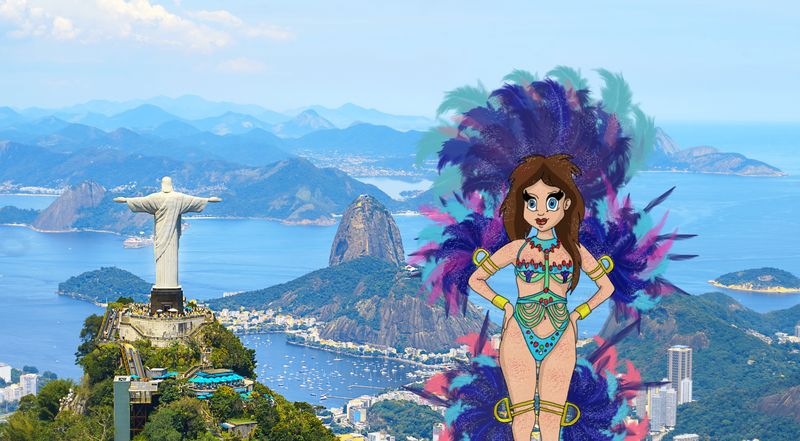 After a good night’s sleep one was enthralled at the prospect of visiting the statue of Christ The Redeemer, which was rather high up on the peak of Corcovado mountain and by golly, it didn’t disappoint. With panoramic views overlooking the whole of Rio, it was nothing short of breathtaking and the statue itself was quite fabulous.

Daddy said perhaps I should try asking it for forgiveness, as he has none going spare. I did however find a charming souvenir saying how much us sinners are loved. That being the case, I must be well and truly adored!! I also bought one for Daddy so he could give it to his latest squeeze. Mummy’s getting some dark rum. No smutty jokes please...

With the trip sadly drawing to a close, my only regret was the lack of shopping, but not to worry, one can get online during the long flight home to arrange some same-day deliveries, not to mention raiding the duty free shops at the airport.

This little jaunt certainly made up for my disappointment at not being sent to Morocco to cover my beloved ginger prince’s overseas tour, accompanied by ‘she who must not be named’. Perhaps I should book the lovely #TeamHeaven gals in for a Brazilian by way of a ‘thank you’?!

Rio blew my mind and the memories I have are truly wonderful and special and as colourful as the glorious carnival itself. And I’m delighted to say that I left Pedro eating humble pie. After much scrutiny, he’s revised his assessment of my dancing abilities. Far be it for me to leave you in ‘limbo’ as to how he reached that conclusion, other than I bent over backwards to prove him wrong…

Farewell Brazil, until we meet again…

I heard rumblings in the office about a spare place being up for grabs at the London Marathon next month. Darlings, I can’t even run my own bath, so don’t even think about it!

***In strictest confidence and entre nous - remember to delete this before publishing*** I think I can now safely show my face in mainland Europe’s ski resorts after that rather unfortunate season as a chalet girl, where it was more than my face which was seen. Nearly bankrupted Daddy, buying up the film rights and getting those NDAs drawn up.

Alas, that one little indiscretion scuppered any remote chance I had of snagging myself an eligible Euro-royal.

Hey ho. There’s always North American ski slopes a gal can conquer if European niceties decree I’m still not welcome there. Perhaps a highly solvent tech entrepreneur or film star may capture my affections. Hope springs eternal! Ciao for now. Hope you gals enjoy your Brazilian as much as I enjoyed mine!!! xx