One is in New York, New York, so good they named it twice. Which is the number of times I had to pinch myself when those darling gals at #TeamHeaven sent through this latest assignment!

NYC. The city that never sleeps and location of the Empire State Building, where many a leading man has declared his undying love to his leading lady. With this in mind - and an umpteenth viewing of Sleepless in Seattle under my belt before take off - it was the first stop on this tourist’s to-do list. Will this lovelorn lass be sleepless in NYC?! Read on dahhhlings...

As I travelled to the top, the butterflies in one’s belly were totally out of control, and my hands were a little clammy, but not as clammy as the blushing bell boy when I tipped him for bringing my luggage to my suite earlier in the day...It is such hard work being a femme fatale, I don’t think people realise how difficult my life is!

Fast forward to the top - to say I was a little crestfallen not to find the man of my dreams awaiting my arrival would be an understatement. One had to stop the lip from quivering, put on a brave face, blink away the tears and admire the impressive view instead. Focus Lady P, focus! 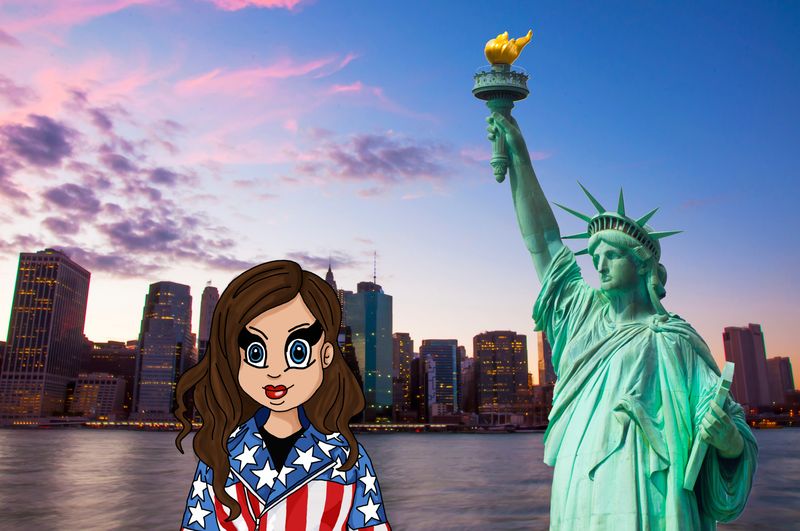 Perhaps I would have more luck finding a new beau at the Chrysler Building - but then again I would be the unlucky gal who would be picked up by King Kong; and that little debacle would cause the most unpleasant gossiping and sniggering by my rather jealous and obnoxious cousins.

Now I like a hirsute chap as much as the next hot-blooded gal, but I still don’t think Mummy has ever forgiven me for introducing Daddy to the swarthy sailor I brought home from a sailing trip around the Greek Islands during one of my gap years. And even less forgiving after my Greek god set his sights on Daddy, who’s always had a soft spot for the Greek classics. Who knew being ‘bilingual’ would cause so much family discord? I don’t know my Aristotle from my Oedipus...

With such a disappointing start, one was determined to put her best foot forward and conquer the city, and what better way than doing what I do best? Shopping? So it was off to Bloomingdales (or Bloomies as we like to call it) and Macy’s, for what was about to be the shopping trips to end all shopping trips. 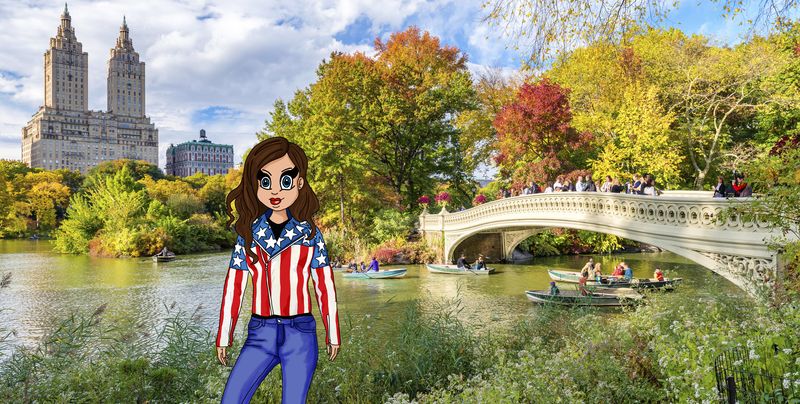 I hit those stores like a mini tornado and didn’t come up for air until I was sat in First Aid, breathing into a (little) brown (Macy’s) bag, trying to get my breathing back to normal and the palpitations under control. They probably started when I signed the credit card bill and realised Daddy might actually disinherit me. One had forgotten that they add on the sales tax at the till - so the price on the tag, isn’t what you finally pay!!

To ease my equilibrium, I decided upon some holistic healing of the highest order, and promptly took myself off to the aptly named Death & Company, where I could soothe my sorrows with cocktails, whilst trying to muddle together a plausible scenario of why I had spent so much, that Daddy would believe. Creative suggestions welcomed. And pronto please!

After the giggles set in, aided and abetted by the rather attentive ‘easy on the eye’ bartender, with a ballsiness normally only found in Brooklyn, and my new ‘couldn’t give a damn’ attitude, I commandeered a carriage in Central Park, accompanied by the current love of my life, my Black Amex Card, sat back and enjoyed the ride. 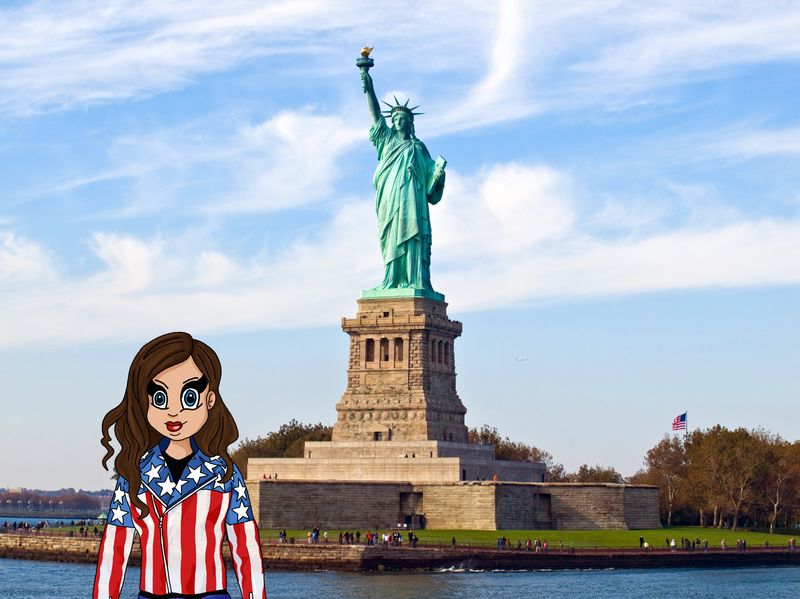 Safely back in one’s suite at The Plaza, I lived out a childhood dream. I was Kevin from Home Alone! I watched old movies, raided the mini bar, not to mention ordering and devouring some divine puddings from room service. As I lapsed into a sugar-induced slumber, I dreamt of being pursued by the silver-screen smoothies I’d spent the evening watching… Ah, a gal can but dream!

The following day entailed a boat trip to Liberty Island to visit the Statue of Liberty - the famous Lady herself. She is rather fabulous! That verdigris is perhaps a rather vivid green but then she wouldn’t stand out so much if she were her original pristine copper.

Talking of copper, I wonder if my ginger prince would turn green if he spent too long outdoors?!?

I got up close and personal, and visited her ‘crown’ - which is probably the closest my head will ever get to one. Sob!

My friends insisted I visit Times Square - apparently it’s a really happening place, with lots of hustle and bustle and I’m reliably informed it’s where they drop the ball! One has absolutely no idea what ball they’re talking about! The mind boggles. I had The Plaza’s chauffeur whizz me past as it was a tad busy for moi and I can dutifully report that there was no ball dropping to be seen. 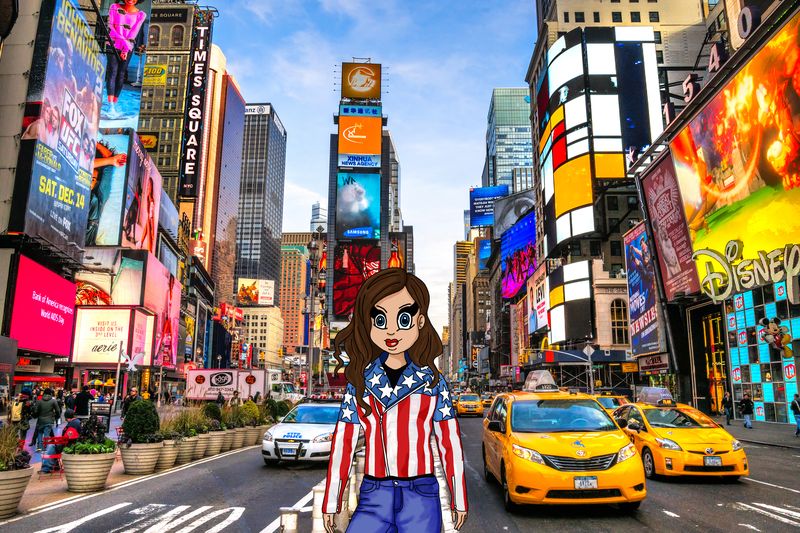 Anyway, cousin Giles WhatsApp’d me to say he’s seen many balls drop in his time, and when you’ve seen one drop, you’ve seen them all, so maybe I’ve not missed much after all...

To round off a fabulous day, one headed to Broadway, to take in a show and after checking the listings, one was thrilled and tickled pink to discover King Kong had arrived on Broadway. Well I had to see that! And what a spectacle it was - a dazzling thrill ride brought to life with a very innovative mix of robotics, puppetry, music and stagecraft. It was heart-stopping, electrifying and as thrilling as any action movie and that’s all you’re getting as I don’t want to give away what happens. My lips are sealed.

I had hoped to pay a flying visit to the Donald at Trump Tower. Alas he was over in London town visiting my prospective granny-in-law and having lunch with his fellow apricot Adonis, my ginger prince.

Instead, I had to content myself with a detour via the United Nations to pay my respects there; I’ve always had a soft spot for peacekeepers and their delightful blue helmets. ‘Make love not war’ is my mantra, and I wanted to do my bit to get that message across in these troubled times.

The French and Italian delegations were particularly receptive to my message - Daddy will be delighted that my sailing and ski seasons in Italy and France paid off, such is my fluency in these languages. Thanks to my successful personal peacekeeping initiative, I now have open invites to Paris, Saint Tropez, Rome and Sardinia.

Cousin Giles is getting rather annoying and over familiar now!! Latest missive says ‘bet you can’t grab a fella at Rockefeller! Go dig more gold at the Rainbow Rooms’. I don’t know what nonsense his mother has been filling his head with. I’m half hoping he’s back on the bottle again, which would at least excuse such lewdness!
Well my gorgeous readers, this is where we part ways as I have a cousin to Skype and put firmly in his place, before I continue on my New York adventures. Will I complete them ‘toute seule’, while enjoying ‘la dolce vita’? I couldn’t possibly confirm or deny…

Thanks again darling gals for another splendiferous assignment. Mwah!!

One’s having problems securing tix for Wimbledon this season. Something about Daddy’s line of credit running out. If you can get me in the Royal box that would be divine. If not, then adjacent will suffice.

Please pay particular attention to the Court Circular and my beloved ginger’s movements over the summer. Our family lawyers and his are still debating the interpretation of ‘stalking’ vs ‘lovelorn’, so we must be extra canny.

I should be ok for Royal Ascot/Ladies Day tickets. One of the owner/trainers used to muck out at Daddy’s stables, and is sorting out some enclosure passes. Although a few of us are going to have to arrive via horsebox. Like a Trojan horse!! Sssshhhh, Mum’s the word! What could possibly go wrong?!