Darlings - or as one says when ‘en France’ - mes chéris!

This month, one has been basking in the ambience of the Six Nations Rugby tournament in Paris, the city of l’amour, where one is quite hopeful that true love will befall me on this little sojourn.

And who would have thought that raucous rugby fans would be such delightful company? I have only ever had the misfortune to have met the old ‘rugger b*gger’ sort. These charming chaps certainly know how to enjoy a ‘good old knees up’ and show this gal a good time.

Having (not so successfully) ventured into one of these concrete and plastic hell-holes/stadiums in the past (and zero desire to repeat the experience) I accepted this assignment with alacrity, and slightly gritted teeth! However, this was on a completely different level and the atmosphere was one of fun, frolics, fizz and fromage!

Although one is of English heritage, as this magazine is based in Wales, one has adopted and is supporting the Welsh team as her own! Just wait until I tell my future father and brother in law about my new allegiance - hope still springs eternal that my ginger prince will requite my affections... 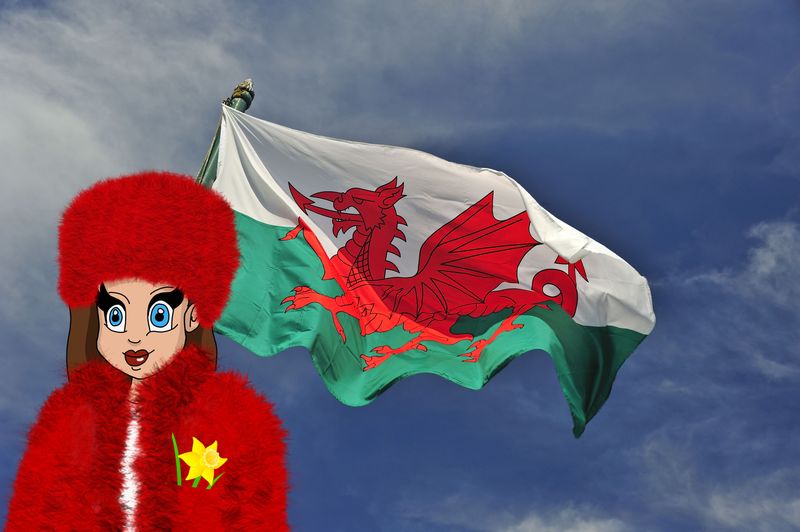 Much as I love to experiment and dress up, I had to draw a line somewhere and point-blank refused to have my head ensconced inside a giant daffodil. Really gals - what is that about? One thought that with such a prime opportunity of being surrounded by so many strapping rugby ‘lads’, that surely one needs to look ‘tip top’ to potentially grab a potential suitor or two? I bet Zara Phillips didn’t catch her beloved rugger chap’s eye by wearing comedy headwear. And tiaras don’t count. So don’t be mean!!

But never mind our beloved Taffs and their daffs! Did I mention the face-painting?! Faces awash with Welsh dragons, flags and leeks? Daddy did mutter something about how all the women in our family must be Welsh and something about fire-breathing dragons; but he refused to elaborate when I asked for more details and where I should stick his leek. What I want to know is, what’s wrong with a good old-fashioned, smokey eye, or maybe a pillarbox red lip, in keeping with the Welsh colours?!

The Welsh national anthem was a bit of a tongue-twister and one must confess that even though I did practice this delightful ditty before the trip, I had to fake most of until we got to the ‘gwlads’ which I sung with gusto. Daddy would have been so proud. He always says I should have been a performer as I am so dramatic. Well I think that’s what he meant when he said I should learn to sing for my supper… 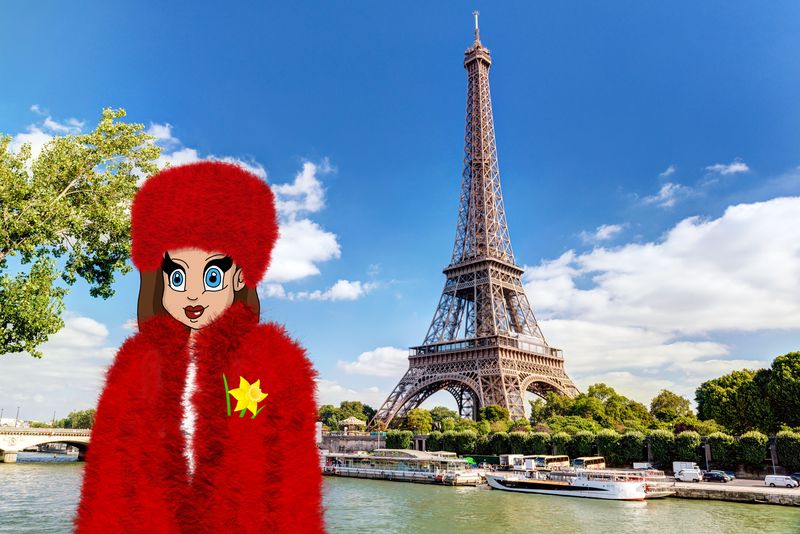 Fortunately there were several chaps whom offered to help me get my mouth around the weird yet wonderful Welsh words, along with many helpful suggestions as to how my gag reflex could accommodate the more guttural pronunciations…Alas none of which I can repeat here, as we’re not *that* kind of a publication...

Anyway, I digress… back to the game and I’m thrilled to say that Wales won. Eventually! It was a rather shocking first half and the language flying around was more colourful than all the daffodils and rugby shirts put together. But now that one is a seasoned pro at these types of events, let’s just say I was quite understanding and could keep up with what I believe is called ‘banter’.

Although I’m still completely befuddled as to why they kept asking the referee when his parents were getting married?!? Daddy said “incompetent b*stard” which I thought was a tad harsh when I asked him; I know I’m not the clever one in the family, but he really can be quite a mean bean. And I should know. He pays my credit card off every month in a cloud of fury and expletives!!

With euphemisms put to one side, and Wales emerging triumphant, most people headed to the local bars, so when in Rome. Or Paris… 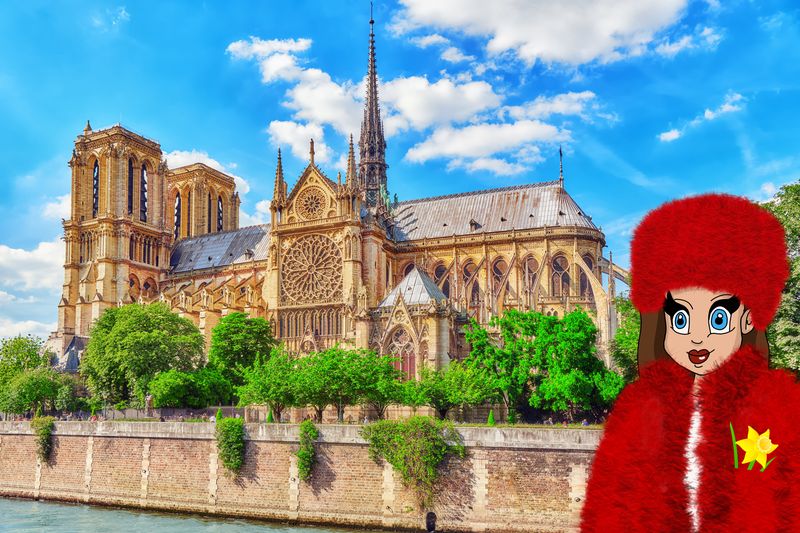 Many carafes of wine were consumed, mostly red, however it would have been impolite to turn down the neverending boxes of white and rose wine which were so thoughtfully provided by the thirsty lads and lasses from the gazillion rugby clubs on tour. We made for quite an incongruous and rambunctious group, and I was enthralled by how passionate everyone was, and not just about all things Welsh and rugby!

I may have not so casually dropped into conversation that one was working for a Welsh magazine and had now adopted Wales as my second home. It seemed to do the trick and one’s phone is jam packed with numbers from LOTS of eligible bachelors - I shall peruse and pursue on my return to the UK and book them into one’s social calendar accordingly. Although if they don’t have a pic on their WhatsApp profile to help jog my wine-infused memory, I shall have to swiftly decline, delete and move on.

Sporting a ‘petit’ hangover the following day, one set out to discover the delights of Paris. On the agenda was a ride to the top of The Eiffel Tower which is a fabulous looking structure - a little industrial looking by day, but by night it shimmers with fairy lights - so pretty. And all the better to have a birds-eye view to prioritise which shopping and tourist districts to target or avoid! 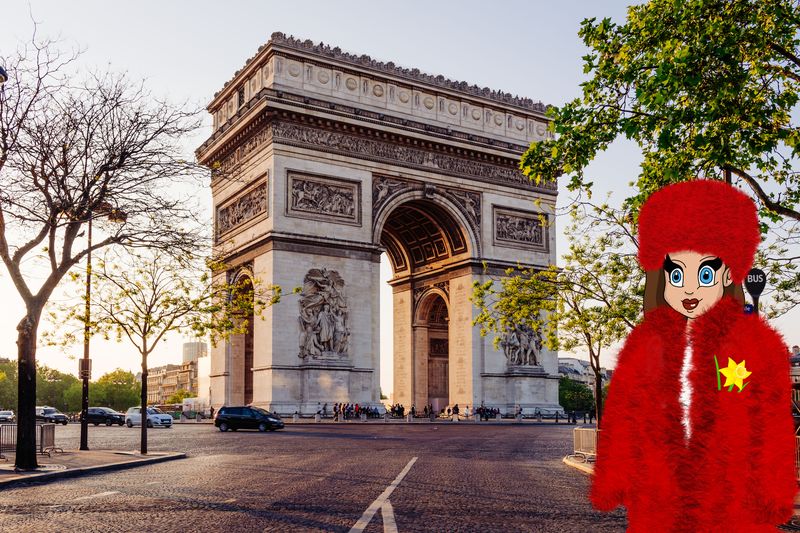 Now please don’t think I’m a fashion-obsessed airhead who’s not very cultured - I did take a river cruise up the Seine, to take in such landmarks as the Cathedral of Notre Dame, the Louvre Museum, and Ile de la Cite. It was very charming as we passed under beautiful bridges while sipping champagne (my favourite part of the trip!). Some much needed rest and relaxation, as I later hit the Champs Elysees like a mini tornado, only pausing for breath to admire and take a quick selfie at the Arc de Triomphe.

One returned to The Ritz Hotel laden with shopping bags - thank heavens for a strapping chauffeur to help me with my haul - I blew a kiss for Lady Luck as we passed the suite my ginger prince’s beloved late mother once occupied - chauffeur Jacques looked more than a little crestfallen when he realised he wasn’t the intended recipient and had to bid adieu at the door to my room.

After despatching my amorous chauffeur with a generous tip, it was time to recharge the batteries and pop online to arrange extra luggage allowance for the flight home. I only hope I can get everything home without Daddy finding out just how much I’ve bought and spent!! Hmmmmm...I’ve not used the old ‘Mummy must have borrowed my card to shop online as she’s maxxed out hers’ trick for a while.

If he were to discover the scale of this shopping expedition he’ll be most disappointed and may even send me back to The Priory to sort out what he refers to as my ‘not so little problem’, again!! 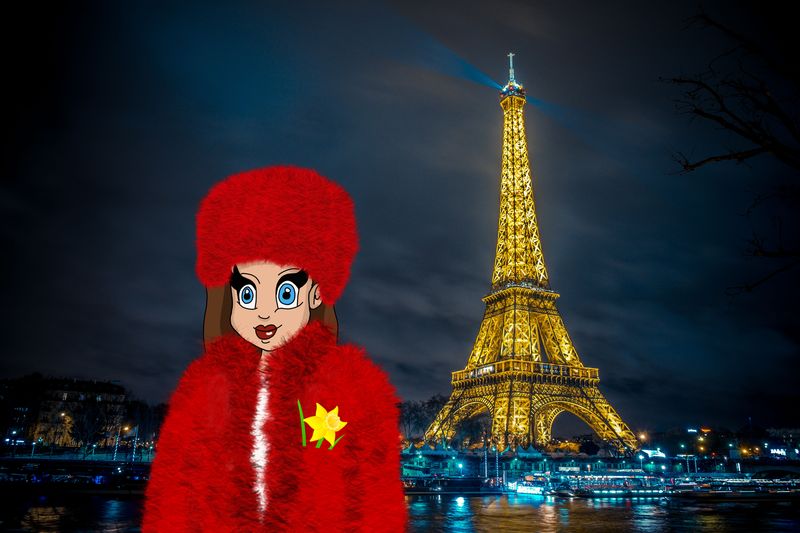 That could prove to be a tad tricky to fit around my travelling schedule, especially now that one has landed this fabulous ‘roving reporter’ job for #TeamHeaven, which I absolutely adore. It would be unwise to put that in jeopardy - I would be truly devastated to have it taken away. So maybe I should behave for the time being. In which case, I’ll cancel the private jet home, and fly back first class instead. Who said I am clueless and have no idea how to economise?!

With that sobering thought in mind, I shall bid you au revoir, and look forward to regaling you with more adventures next month.

***Note to #TeamHeaven - I know that I might be a ‘temporary’ Taff after this latest (ad)venture, however please do NOT feel compelled to send me to Cardiff for the Wales v England Six Nations rugby match. You have no need to test my loyalties, nerves or liver!

If you are still feeling sporty, can I just oh-so-casually mention this maiden’s new found appreciation of cricket?

Incidentally, I see that the England team is touring the Caribbean this month and next. I have my cricket whites (or something closely resembling them), I’m ready to travel, and Giles, our family’s cabinet maker, is a fully-fledged member of the Barmy Army. He’s said how much he’d love to show me how to handle wood in a tropical climate. Apparently it expands at quite a rate...