After last month’s fabulous sunny sojourn, where I put the ‘Rio’ into riot, I’m back where I belong at this time of year. On the piste!

If you don’t ask, then you don’t get. And those fabulous gals at #TeamHeaven have excelled at delivering on my mantra combined with my devilish powers of persuasion, with maybe a smidge of pleading and perhaps a teeny tiny toddler tantrum in the office thrown in for good measure to reinforce my point…

Little ol’ moi has managed to snaffle herself a skiing trip to Whistler in Canada. Oh how I love the wet white stuff!

Landing in Vancouver, I stocked up and got fully loaded with their excellent coffee from one of the gazillion coffee shops they have on each corner - caffeine heaven! it was time to load up the SUV with my skis and suitcase, and head north to the mountains. Woo-hoo Whistler, here I come! 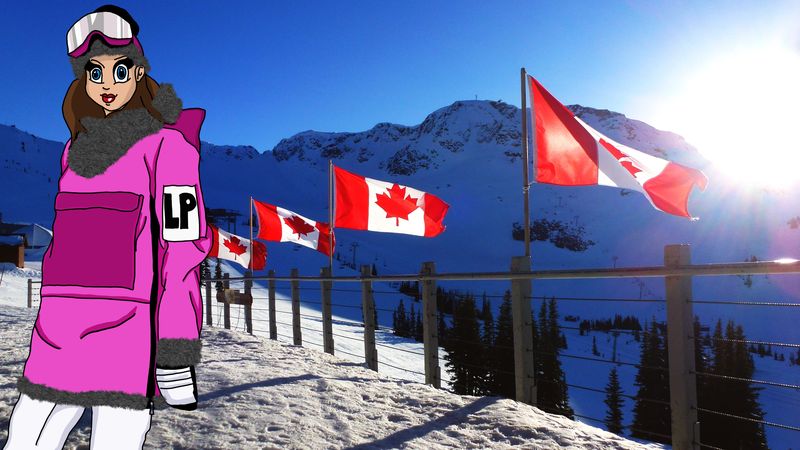 Located in the Squamish-Lillooet Regional District, it’s a skiers and snowboarders heaven, with 200 km of slopes and 50 km of ski routes to explore. That’s a lot of snowploughing and slaloming for yours truly, but I gave it my best shot! My thighs are usually screaming for mercy after a hard day on the slopes. The less said about the state of them after a heavy night, the better.

You won’t find this on any official travel sites, and you’d have to crowbar my little black book from my frozen hands, which contains the inside track on the very best (underground) bars, boutiques and where the hottest guys hang out. Tho I do wish I hadn’t imbibed quite so many delicious cocktails, as I can’t remember for love nor money what was in them or where they were served. Thank heavens for those helpful cute ski guides who are so attentive to us when we go off piste, so to speak. 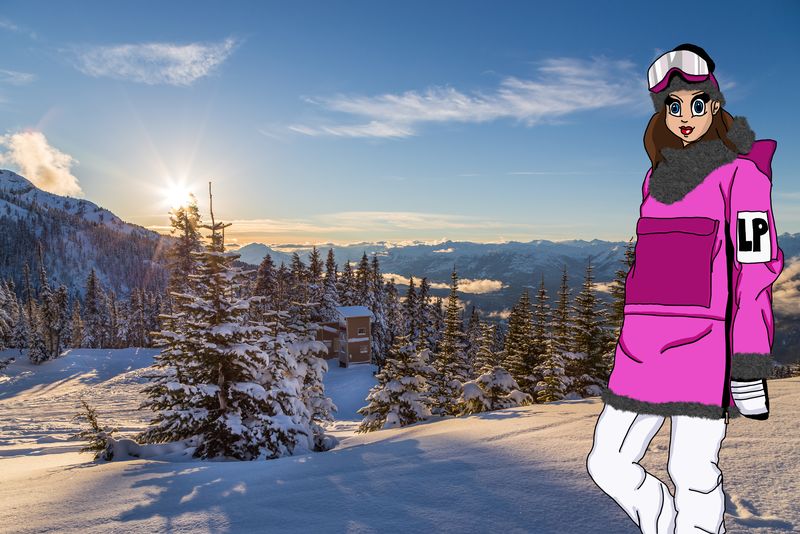 And those charming chaps are very adept at knowing the best places to go to avoid the dreaded paparazzi. Daddy has a bet with his gamekeeper that there’ll be at least five torrid tales and articles about me on the Daily Fail’s ‘sidebar of shame’. However, he made no mention about whether the Sunday redtop tabloids count or not, but I’m already in half a dozen features and that was even before midday!

Being the pro that I am at packing and skiing, one was unpacked and swathed with suitable attire in no time, arriving on the piste looking nothing short of spectacular. It’s incredible how a furry muff can cause such a flurry of interest and attention. And don’t get me started on the reaction to my fur-trimmed hood and cuffs.

I boarded the gondola, firmly grasping my poles in one hand, muff in the other, and was swiftly transported to the peaks. One felt one had arrived at one’s spiritual home…I looked like quite the ski bunny, but with a difference. I can actually ski! 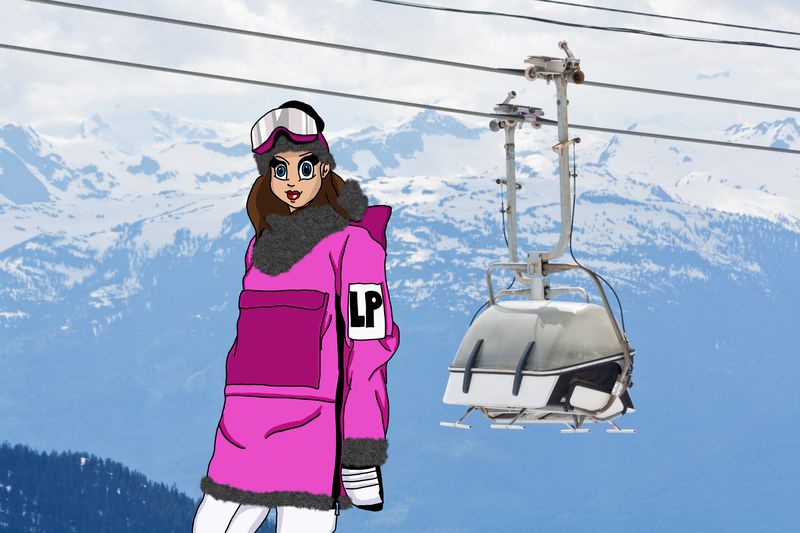 Whilst my painfully brief season as a chalet gal in the Alps left me with zero culinary skills, I can slalom like an Olympian - a black run holds no fear for me - I had the most fabulous season and a rather dishy boyfriend who was destined for the Winter Olympics until our eyes met over blazing sambucas and a croque monsieur.

Anyway, enough about me and my reminisces of how I was once loved and adored. I was overcome with joy when I spotted Jacob, my divine Canadian ski instructor; he has been invaluable on and off the slopes. He has such a glint in his eye, and keeps on inviting me to scale ‘Jacob’s ladder and be taken to heaven’. He’s such a silly sausage - and quite where he’s going to put a stepladder on the slopes is anyone’s guess! Although he did mutter something about having to do too much DIY in his log cabin and could do with a helping hand.

Jacob knows absolutely everyone and can be more than a little indiscreet with the local goss, which is always so much fun when one is not the subject of such tawdry tales. I’m jolly thankful he couldn’t pick up a signal to dish the dirt on me courtesy of the Sunday papers. 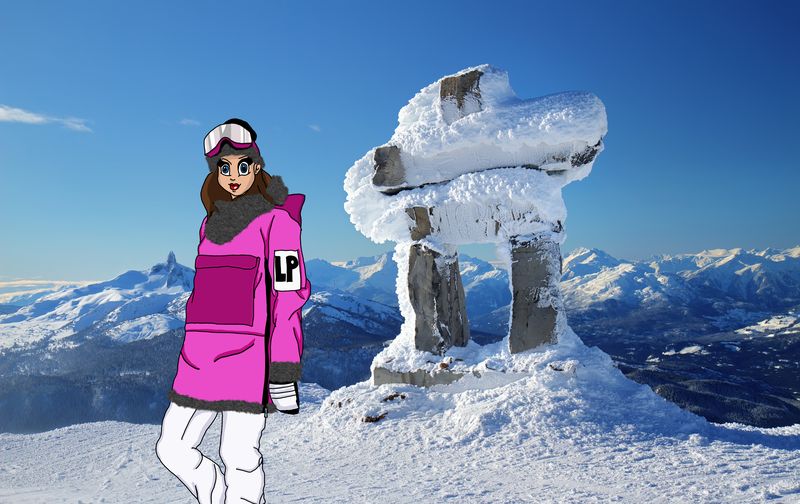 In no time at all he had me downhill skiing, in all sorts of poses and contortions - performing a few aeriels and we even managed to squeeze in a quick ‘bonk’. That’s a ski move you saucy lot. Tsk, tsk - get your minds out of the gutter! It simply means to bounce off an object during freestyle. What can I say? One has been doing this childhood and I feel so at home in the mountains. Jacob swears that I was born to bonk...Praise indeed, as I’m sure he’s met plenty who are more bonkers than little old me!

After an exhausting day on the slopes, one was looking forward to an evening of apres-ski, which does not involve any skiing whatsoever. It merely refers to social activities and entertainment which occur after a day on the slopes; more often than not it includes large quantities of alcohol and copious quantities of misbehaving! What a chore, but as an intrepid traveller and gal about town, I’ll take one for the team.

With a promise to catch up with Jacob later that evening to reminisce of seasons past, catching up on the latest misdemeanors of one’s so called frenemies, and another invitation to scale his ladder (thank goodness I don’t have vertigo), it was time to shop.

Now I know I had a teenie tiny bit too much of a hot toddy that afternoon to keep the cold at bay, and perhaps in hindsight I should have postponed the shopping expedition. However, you know the saying, ‘so little time and so much to do’? One had an awful lot to cram into a few days and so, although a little unsteady on one’s feet and perhaps more than a little squiffy, one headed off to the boutiques in search of some fabulous accessories. 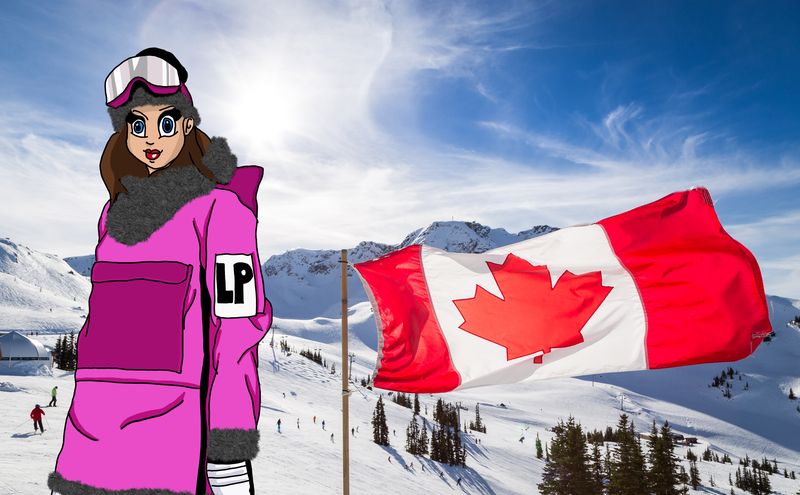 Usually I’m pretty good at finding my way around, but one must confess to having to flag down a rather dashing Royal Canadian Mounted policeman to help me track down and safely reach my destination. I used all my powers of persuasion, batting my eyes, tearing up and doing my misty-eyed damsel in distress routine. I offered to slip his horse a carrot by way of thanks, and I think the darling Mountie offered to reciprocate with the same (or similar) treat...

Suffice to say I looked rather fabulous arriving at the store on horseback with my arms clasped tightly around my dashingly handsome Mountie. I even managed to get his number while doing my best to dismount with as much elegance as I could muster. Not an easy task when wrapped up in fur, a few sheets to the wind and one’s furry muff flailing in my wake. However, where there’s a will there’s a way!

Shopping done and accessories safely stashed away in one’s luggage in a secret compartment, especially constructed so Daddy wouldn’t see all my contraband. He really does throw the most spectacular tantrums when he discovers the mementos I bring back from my travels, and an even bigger one when they don’t entirely tally with the (enormous) credit card bill... Doesn’t he realise I need a few souvenirs of all the happy holidays I take?! Taking photos aren’t quite the same as some gorgeous memento foraged from a delightful boutique or flea market.

Back to Jacob, sans ladder, but armed to the gills and brawny biceps with Bolly! Boy did he have a great night of entertainment lined up, including a dip in the hot tub. Rub a dub dub, three men in a tub...Tho call me a prude when I turned down his suggestion that his friend Margot join us in the tub.

There we were, bubbles all around, and not just the champagne flutes in our hands. He sat very close as he insisted on nuzzling up close to whisper all the latest juicy tidbits of gossip.

The scandals were pouring out thick and fast. One was blushing profusely - thank heavens for the chilled champers to cool me down. My my, one will be able to keep one’s friends highly entertained in outrageous tales of misconduct for the foreseeable, which greatly elevates one’s status in our little circle. Kudos to me!

Although I’m not sure I’ll be able to think of my ginger prince in quite the same light after Jacob told me about their European apres ski antics while in the military, with the sporting prince bringing a whole new meaning to the definition of a ‘red run’...

And that my dear readers is where I shall leave it, as what happens at Whistler, stays at Whistler. And I don’t want you to think ill of me. What can a gal say when there’s a hot tub and champagne involved? And don’t believe everything you read in the Sunday papers...

Toodle pips my darlings, until next time...

***Note to #TeamHeaven*** thank you darling gals for this superb sojourn. Bit of girly goss entre nous, you know how they say the Mounties always get their man? Well you will NEVER guess what? Turns out my burly policeman has the hots for Jacob, which is why he took my number. What’s a gal to do? Play cupid or play stupid?!?

P.s. After such a sterling job with this assignment, I shall leave myself in your capable hands for next month. Surprise me darlings! Although if any of you have a Palace security pass I could borrow so I can personally hand over a birthday card to my beloved’s grandmother, that would be absolutely awesome. Thanks awfully.