Greetings and salutations you ravishing bunch.

I don’t know about you, but I’m feeling a little bloodthirsty this month after being dispatched to Transylvania, Romania in search of Dracula’s castle for the emmaheaven.com Hallowe’en edition.

One was a little perplexed when first given this assignment, as one thought Dracula was long gone and ancient history.

However, after a little more research one found out that the old roué was not entirely out for the count, and is actually ennobled as a Count.

Not that I’m a social climbing arriviste, unlike a certain ginger’s paramour...but a title does put a different complexion on things for a well-connected society siren like myself. And if there is the remotest possibility that he has at least one surviving male member in his family, then I’m the gal to hunt him down Lady P style.

This wasn’t going to be a witch hunt. It was going to be a Count hunt… Gosh, you don’t want to try saying that too quickly, well not unless you want to make a sailor blush! 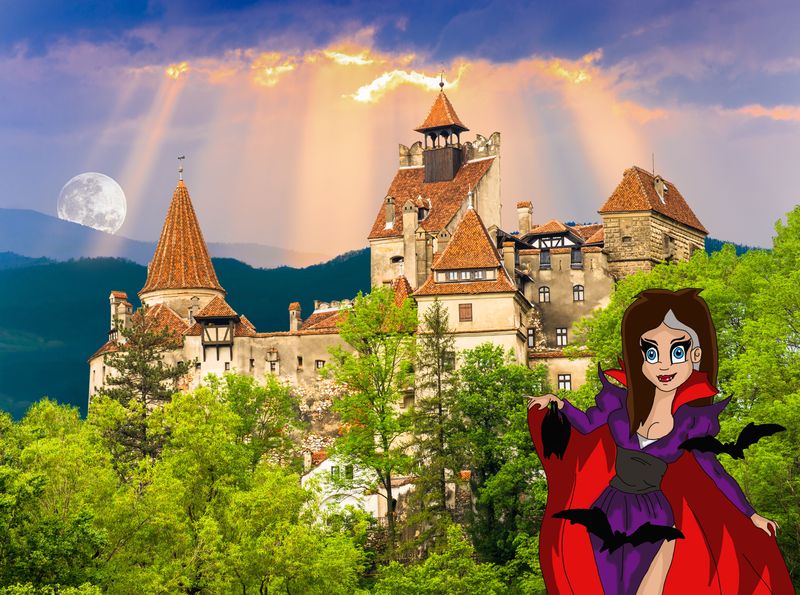 And Daddy will be so pleased at me making some headway with the European aristocracy. He used to call Giles - one of my exes - a right count, but I think Daddy has given him the wrong rank, and his dentures need fixing. I could have sworn Giles was a Baron.

Anyway. I digress...Packing proved to be a little trickier than usual, as one needed to pack some rather bizarre items.

Having read that Count Dracula belonged to some kind of family called Vampire, the travel advice suggested the following items would be necessary if one came into contact with any members of this charming family: 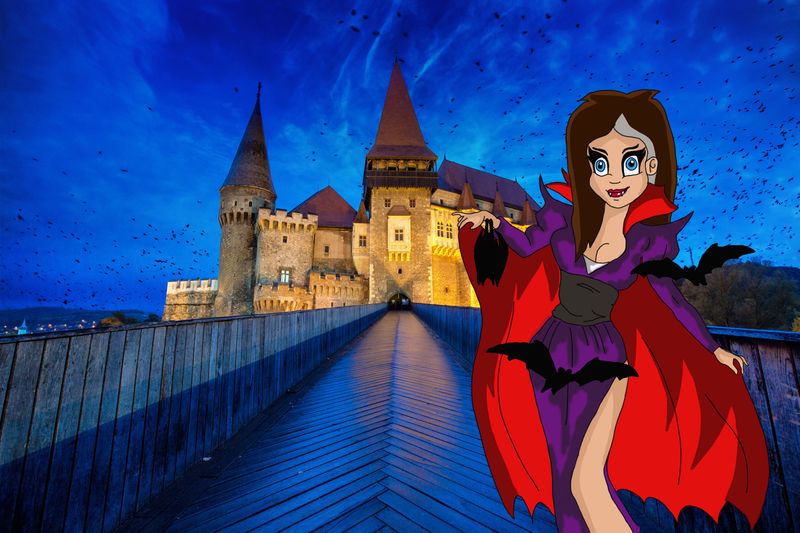 Like the proverbial bat out of hell, my first stop was the infamous Bran Castle - a national monument and landmark in Romania - it’s more commonly known as ‘Dracula’s Castle’.

After conducting a thorough search, courtesy of a private guided tour with a charming chaperone, despite trawling the turrets and dredging the dungeons, alas my Count was not to be found anywhere.

Undeterred, one hot footed it to the nearest hotel for some R&R before continuing afresh with her search the following day. But as so often happens on such sojourns, one became a little sidetracked upon discovering the local Romanian firewater - Palinka - a traditional fruit brandy.

It was rather delicious and several ‘snifters’ went down a treat; such a treat, that one was feeling rather squiffy and ‘in one’s cups’, so decorously decided it was time to retire to bed for the evening before one made a complete show of herself.

Strictly entre nous, our family still hasn’t quite recovered from paying to remove all known video footage on the internet, of cousin Fiona’s Eastern European hols a few years ago. She and her ‘holiday romance’ made a rather risque home movie - something like ‘When good girls go Vlad - Impaler!’ Although the royalties paid handsomely, the non-disclosure agreement didn’t come cheap... 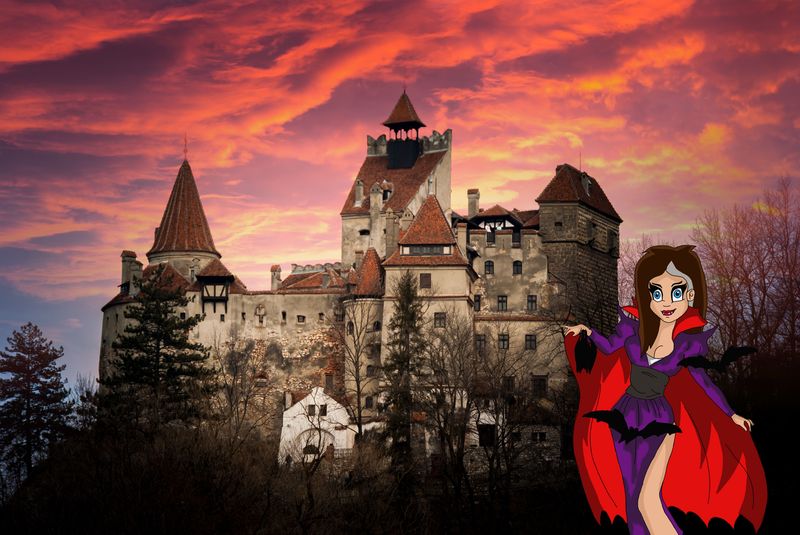 Anyway, where were we? Ah yes. A graceful exit, before getting into any more scrapes and japes...Now I’m not saying it was entirely down to the brandy, but one had *the most* surreal experience later that night. I’m still not 100% sure if it was a dream or if it really happened, such is my vivid recollection of ‘events’. Quite simply, this most dashing chap awoke me from my slumber. He was intoxicatingly thrilling and I swear had cast a spell upon me.

As we danced and fandango’d around my four-poster, his black cape swirled around us. It felt like we were dancing and walking on air, with not a Snowman in sight!

I felt as if I were suspended in time and completely weightless (although that’s probably thanks to the hardcore juicing retreat I’d just been on), with unusual ethereal music, wafting through the darkness, which left me feeling like I had been in a trance.

My recollection is a little hazy at this point, other than I remember him rather enthusiastically kissing my neck. Now as much as one absolutely adores having one’s neck nuzzled, his nuzzling was a bit too exuberant, so one pushed him away and politely told him to reign in those gnashers, and get a bit between those teeth. 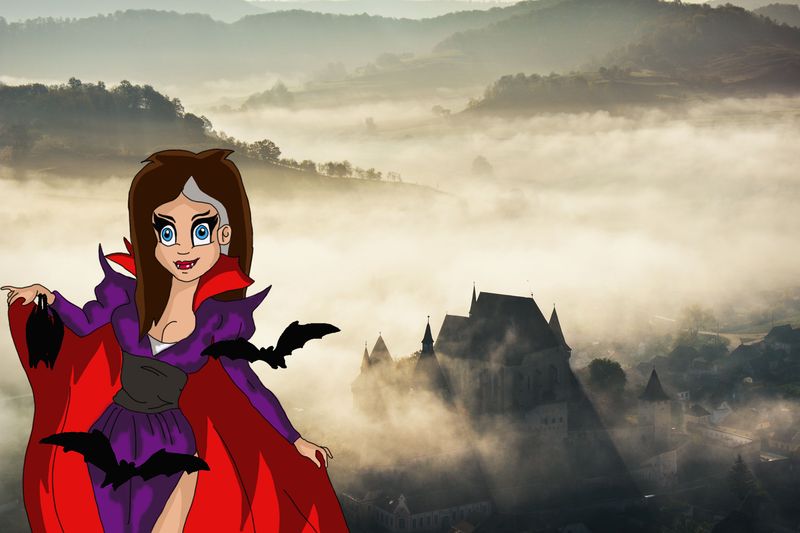 That’s no way for a gentleman to behave on a first date. I find they need to be treated like a horse and broken in gently!

The following morning I realised I had been right to stop his amorous advances in their tracks, as one discovered two small red marks on one’s neck. Thankfully one packed a variety of Hermes scarves; a little dab of some Touche Éclat, one would barely notice one’s run in with a semi-rabid romeo!

After this little ‘incident’, I came to the reluctant conclusion that maybe this was a behavioural hallmark of Transylvanian men and that one might be better off finding a gentleman - with the emphasis on ‘gentle’ - closer to home.

Count or no Count! Good manners cost nothing! Had he not eaten before our fandango? And although I do have the most smooth and slender of throats, there really was no need for him to lunge at it quite so carnally!

He would have had more luck getting blood out of a stone...Guess I dodged a (silver) bullet with that one!

My trip was not entirely in vain, or should that be vein?! Useful life lessons have been taught and learned. One has returned to good ol’ Blighty with a renewed respect and appreciation for British chaps (they certainly know how to treat a Lady).

However, one is still rather flummoxed as to why I needed that rather odd list of weird and wonderful items. AND what am I to do with them also poses a problem. Maybe I will pop them in Daddy’s safe should one ever cross paths with members of The Vampire family. Perhaps they will show me how to use them?! 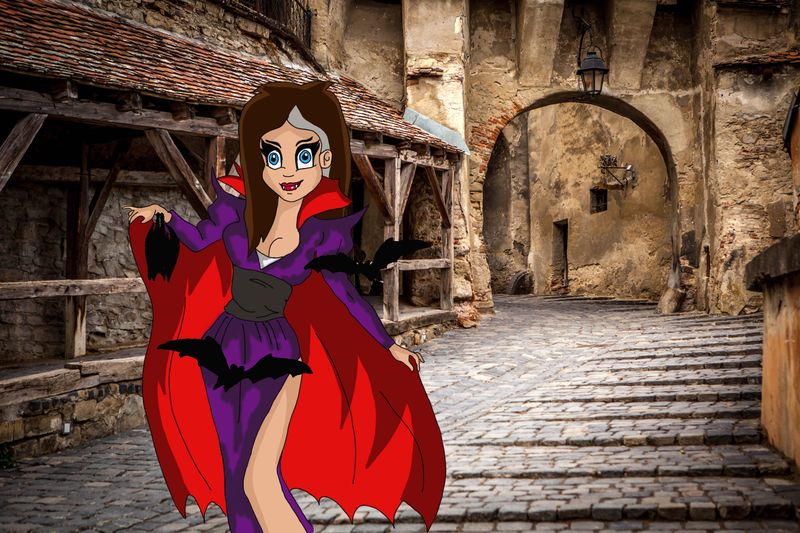 Or maybe I could use them as some kind of talisman, for the next time I see my beloved ginger avec/sans his ‘companion from the crypt’. Sigh - he looked so dashing at his cousin Eugenie’s Royal wedding in Windsor.

Alas, I had to decline my invitation to the wedding. Since my return from Transylvania, I have had to take refuge in my private quarters, only venturing out in the evenings. I never thought I’d be so pleased to have the clocks go back this month, and for the dark evenings to descend.

Daddy says I’m a changed gal. I overheard him invite the family priest to supper. Muttering something about a ‘brandy count’, or words to that effect - I swear Daddy’s psychic, as I’ve not breathed a word about my Romanian romeo...

If anyone wants me, I’ve retired to my bed where I shall be ‘out for the count’! Toodlepip.

See you next month darlings

[Note to #TeamHeaven: Cooooey. Only little ol’ me. If anyone at #TeamHeaven is reading this… fingers crossed you lovely gals can find a way to send me Down Under - that’s where my beloved red-haired romeo is headed. Hint hint...Otherwise I shall have to count down the days until his regal return, and pray for fireworks on bonfire night. One’s marshmallows are already melting in anticipation…]