Lady P - November - Down Under

G’day my ravishing readers and yes, you’ve guessed it - little ol’ moi is Down Under in the Antipodes.

One was recently deployed to Australia to do a little sightseeing. However, one was not going to waste such a long haul opportunity and not try to ‘accidentally on purpose’ bump into my ginger prince.

I’m not ashamed to confess that after one or two teeny tantrums, Daddy called in a few little favours from our second cousin’s former keepy-uppy partner Mr Beckham. I almost didn’t recognise him when I went to collect my tickets for the opening ceremony of the Invictus Games. He has a lot more hair than I remembered. As for his tattoos, I had to wonder if he was off to audition for the circus. And then I spotted they were of his children’s names, which I suppose helps him to remember. Perhaps Victoria could buy him some Post-It notes as a stocking filler for Christmas?!

Call me old-fashioned, but I’m partial to using a dictaphone, tho Daddy says I should use my fingers like everyone else. He really does talk gibberish, not that I’m going to be the one to say anything. That’s his 92 year old Nanny’s job...

Anyway, I digress...As you can imagine, one needed to look her very best and I’m not going to be coy when I admit that an obscene amount of shopping took place in order to procure the most amazing outfits to ensure all eyes would be on ‘me’. 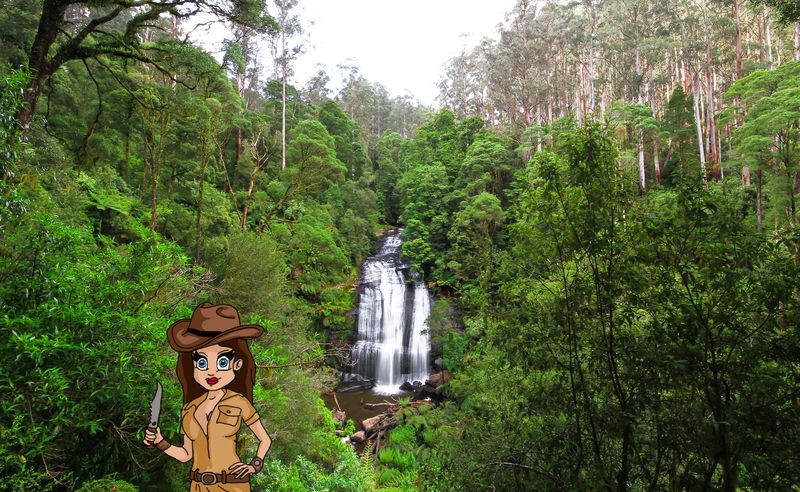 Alas, there was just one teenie, tiny significant detail that would derail my cunning plan and throw one’s life into complete turmoil which unfortunately led to a bit of a meltdown...

The source of my distress you ask? My ginger prince and ‘her’ had announced he is going to be a daddy! I thought my world had ended, along with all my hopes and dreams. For so long I have been under his spell and the illusion (delusion?!) that one day, I, Lady P would be an HRH.

Now alas, that is no longer a viable option and I reluctantly relinquish my claim, bidding my ginger prince a fond farewell as he rides off into the sunset with his ‘Sheila’. I’ve got the hang of this Australian lingo rather well don’t you think? And so this lovelorn gal will be a ‘drongo’ no more. No more tears shall be shed and no more timed wasted on unrequited love! 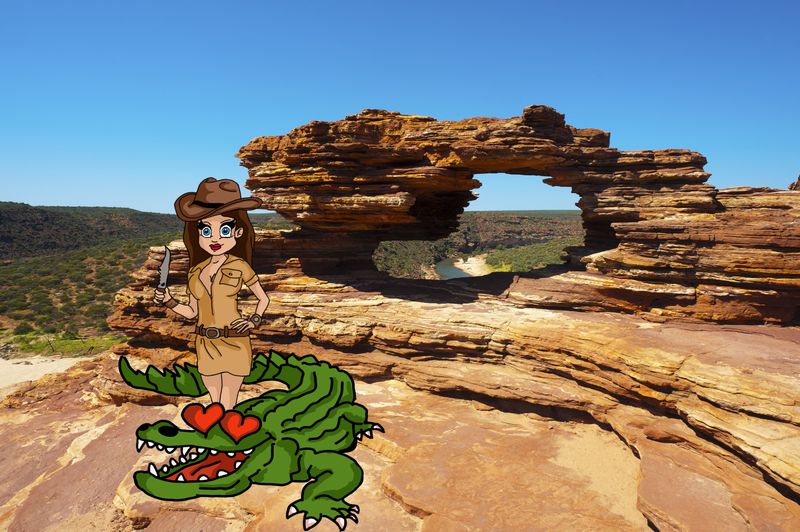 Onwards I go with a renewed quest to find one’s true love. [Daddy has also threatened to cut my allowance if I don’t quit on my crush, so that’s an added incentive, not that you can put a price on matters of the heart.]

Despite the pending princely parenthood briefly raining on my parade, the social invitations were flooding in thick and fast, one of which was an invite to ‘a barbie’ for some tucker? The mind boggled! However I was intrigued when asked to go into the bush in search of crocodiles. One’s mind immediately conjured up the most divine handbags…

So into the bush (rather like a jungle), I went, feeling rather brave and adventurous and ready to make a new start and find the real moi. You can imagine the shock when I needed the ladies room, only to be told the ‘dunny’ was a hole in the floor and one needed to dig first! Where’s Alan Titchmarsh when you need him?! Thankfully I’m rather industrious and years of practice with treasure hunts at our country estate and thrashing p(h)easants has paid off, not to mention endless hours in the gym squatting!

I have to say that there weren’t many crocodiles to be seen, creepy crawlies however, were a different matter altogether. The little blighters were everywhere! Fortunately one’s not scared of spiders or snakes - after many years on the dating scene one learns how to protect and defend oneself from lots of arms, tentacles and other moving slippery things that could potentially harm you! Correction. Kill you!

Sleeping arrangements were ever so slightly below par. Obviously one is used to a certain minimum standard of hotel room. Unfortunately one threw a mini tantrum when shown one’s tent for the night! 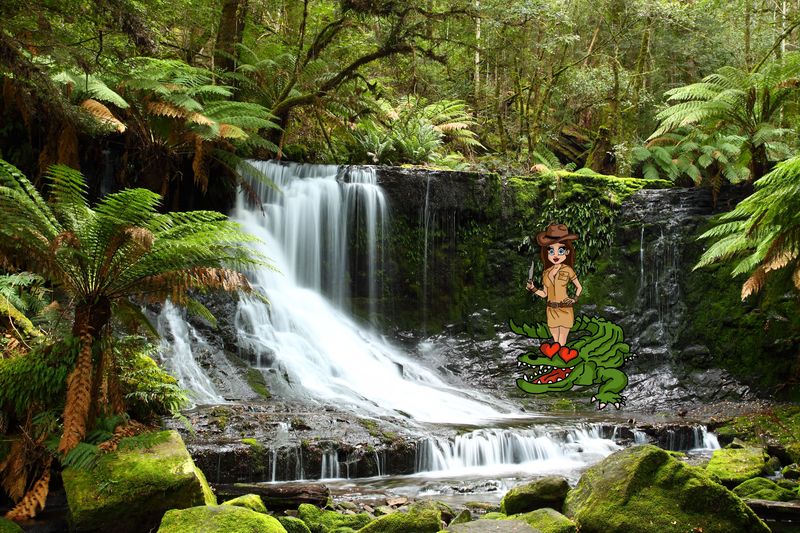 They did try placating me by saying that we weren’t camping - we were glamping. This did alleviate some of the tension and put a different perspective on things, especially when Bridget made up my bed with a darling jewelled throw I picked up in the Middle East last year. The tent looked far cosier and a lot more inviting than the brave guides who were sleeping out rough, under the stars, ‘communing with nature’ - fair dinkum?!

On to the thorny, sticky subject of food. One was expected to chow down on ‘bush tucker’ and this is when another almighty monstrous tantrum was thrown! Things had been going tickety boo up until then. I was feeling rather adventurous and had already tried some kangaroo, crocodile and goanna with warrigal greens (aka New Zealand spinach).

But then some wag decided to ‘up the ante’ and served up a plate of witchetty grubs! There was absolutely no way one was putting that in her mouth. Things did get rather out of hand and a little bit shouty. After what seemed like an eternity, and a very welcome large glass of cognac, calm was restored once more.

I don’t know whether it was the cognac, or exhaustion from my tantrums, but I easily fell asleep to the gentle buzzing and humming of the insects and slept like an overtired toddler!

The following day we continued our quest for exotic animals, when we stumbled upon, quite by chance, a TV set. Although I was slightly flummoxed to find a TV studio in the middle of the Australian jungle - complete with campfire, hammocks and a red telephone box! I think the film crew were far more taken aback, or should that be ‘outback’?! to find us in the middle of their filming location! 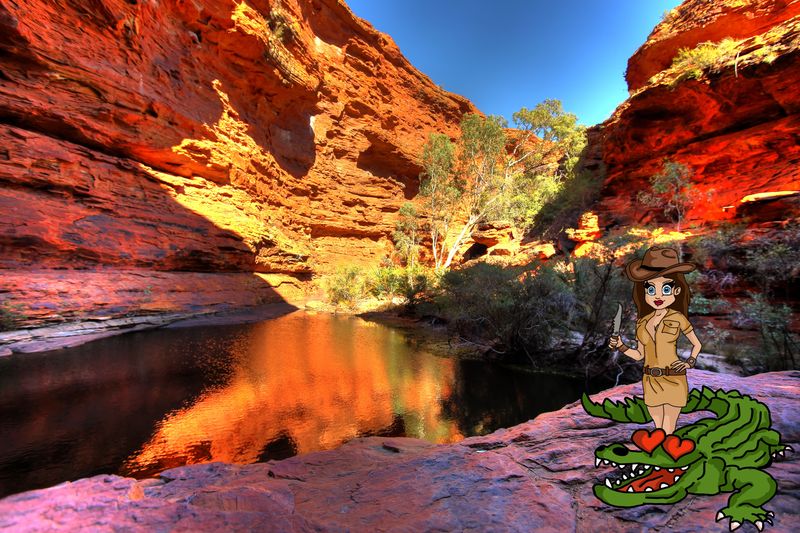 They explained that they were setting up camp for the UK’s ITV show “I’m A Celebrity - Get Me Out Of Here”. Never heard of it, or them. But I did inform them that they were in fact in the presence of a celebrity, and aristocracy for that matter. Said I’d be only too happy to help out should they require a bright new star for their upcoming little TV project.

They didn’t seem that eager to sign me up. Apparently they had had a Lady on the show a few years ago - said she was a monumental pain in the backside, had a vicious tongue AND expected preferential treatment. Whatever happened to the British stiff upper lip? What is it with these divas and their tantrums?!

We travelled back via the Palazzo Versace Hotel for a few days R&R, apparently this is where all the ‘slebs and plebs’ return to after their time in the jungle. After some further research on that TV programme, Bridget and I have extended my stay in the hope of bumping into some rather dishy celebrities.

The Rich List mentioned a Geordie TV-presenting duo. Daddy said something about elocution lessons, that there’s no reason why a Geordie couldn’t fit in to our circles, and when they’re as loaded as they are/impoverished as we are, then we can’t afford to be too picky if we’re to preserve the legacy of our family estate.

I think I’ve spotted one of them - tho he seems to be spliced with a baby in tow. Not sure if he’s Ant or Dec. Hard to tell when they’re not together. And there’s a giggly blonde too, but she’s not his wife. 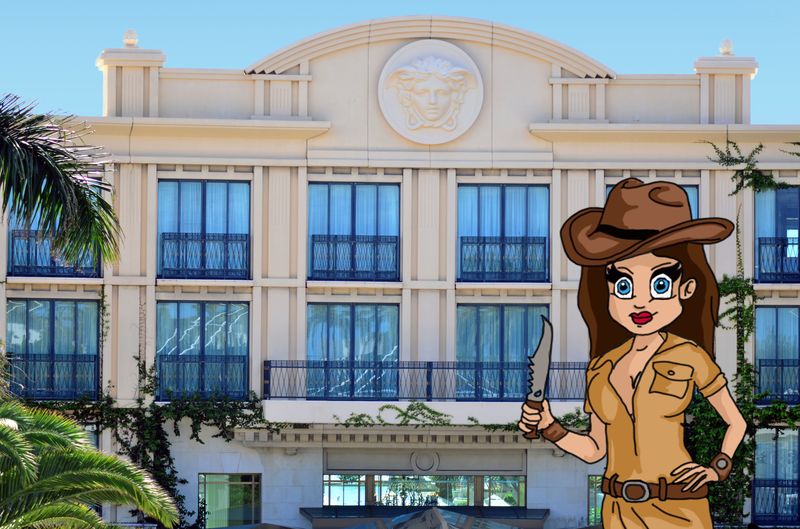 Anyway, I’ll wait for the other half of the Geordie duo to appear and sweep me off my feet - I hear he’s recently separated and a jolly good egg. Perhaps he’s recovering from his jetlag which is why I’ve not seen him around. I’m sure he’ll show up eventually. Meanwhile I’ll upgrade to one of the suites, courtesy of Daddy’s plastic, and wait for the new object of my affections to appear and whisk me away from it all. Daddy’s going to be so proud when I land this big fish!***

I’ve always been rather partial to a regional accent. And if nothing else, I can fulfill my Lady Chatterley fantasy...

As Daddy so sagely says - when one door closes, another one opens. And this hotel has some terribly ornate doors...and if it all gets a bit too much - apparently I need to shout out - “I’m a celebrity - Get me out of here!” or should that be “I’m an aristo?”

Oh dear. Oooopsy daisy. Made a bit/LOT of a faux pas. Turns out that my new love - one half of the Geordie duo - isn’t in Oz at all. Taking a career break is what they’re saying, and has stayed in the UK. Daddy is beyond FURIOUS at the hotel bill. And I haven’t seen Bridget for dust after we did our extensive research on the Rich List. Tho I did get a message from her saying ‘Why aye Pet - I quit’. Call it a sixth sense, but I wonder if she raced back to Blighty and has sunk her claws into my intended…

As darling Freddy would say, another one bites the dust. Or was that HM The Queen after the York wedding last month?!

[Note to #TeamHeaven travel team - at the risk of sounding ungrateful, please don’t send me to Germany (again) - I did the beer festival, and I don’t think I can face another German sausage.

Christmas markets, lovely as they are, can be a bit of a hazard with all those mulled wine huts dotted about everywhere... Perhaps a long weekend jaunt to NYC and some ice skating at the Rockefeller, or a little sunshine break to top up my Vit D levels?

You know me! Have up to date vaccinations and passport, will travel.

Remind me to drop the boomerangs off at the office. Bizarrely, the shopkeeper said they couldn’t be returned. Rather ironic, non?!