Buenos días queridos, darlings and fellow fabulous bon viveurs! One has just hot-footed it back from the most life-changing trip. Buckle up and hold on to your sombreros!

This month’s latest escape and japes came courtesy of a trip to Mexico with the boss lady herself. Emma Heaven.

Imagine just how thrilled one was, when at the airport, I not only ‘bumped into’ (one has an Olympic gold medal in stalking!) the fabulous Emma Heaven but got to sit next to her and her charming husband Adrian on the 10 hour flight. I don’t know which one of us was the most stunned by such serendipity!

I had visions of the three of us cosily travelling the length and breadth of Mexico, taking in all the beautiful scenery, experiencing fine dining and partying together, impressing them with my schoolgirl Spanish learnt at a residential paella-making course the spring term I was expelled from boarding school. So imagine my disappointment when we arrived in the Yucatan, bright and early, raring to go, only to be unceremoniously put into a taxi and waved off into the (Tequila) sunrise! First up on my to-do list was the Coco Bongo club. And what a colourful extravaganza that place was! Scantily clad females wrapped up in ribbons dangling from the ceiling, confetti falling from the skies, loud music, jugglers, showgirls, good times galore…

One was mightily relieved to be hoisted up on some swarthy, young, muscular chap’s shoulders, it must be one of the nicest viewing platforms that one has ever been on; sturdy and comfortable. And he brought back some VERY fond memories of the ‘clavadista’ (cliff diver) chap from La Quebrada, Acapulco who taught one how to dive from a great height during a very extended round-the-world gap year...!

Anyway, I digress...One does not remember much past this swarthy vantage point, after imbibing a steady supply of the most gloriously large and colourful cocktails one has ever experienced. And when a bar provides all-inclusive drinks in its entry fee, what’s a thirsty (and soon to be disinherited) girl with a diminishing trust fund supposed to do?! Unsurprisingly one awoke the next day with the most shocking of hangovers, and resigned to spending the day in bed with lashings of Alka Seltzer, which was the only fizz I could face, and a steady supply of sustenance from room service.

48 hours later, one was feeling back on top of the world, and raring to go explore one of the new Seven Wonders of the World - Chichen Itza. Built by those clever Mayans in 600AD, one embarked to this city of ruins on a warm, sunny day. And Daddy thinks he has problems maintaining our family estate which was built a mere thousand years later. Those Jacobeans could have learnt a trick or two about building from the Mayans!

I won’t mention this to him tho, as his blood pressure is high enough already as the beloved ginger Prince’s killjoy family rejected my father’s generous offer to ditch Meghan and marry me...

Alighting from the taxi, one was greeted by the very attentive tour guide Miguel - not only was he a handsome chap but also extremely knowledgeable, doing a terrific job of explaining life during the Mayan era and the importance of the Mayan legacy. One couldn’t help but daydream how Miguel might cope with a British winter and the European ski season… Putting romantic illusions and delusions aside, one was simply awestruck and overcome with emotion at how majestic Chichen Itza is and the great energy which surrounds it.

Not only the culture moved me, but one was rather tickled pink (and not enough sunscreen…) by the street vendors and their wares. I was particularly taken by, and promptly bought, a rather kitsch mini Mayan temple, which will sit proudly on Daddy’s desk so that he may use it as a paper weight.

Mummy will have to settle for the little Mexican worry dolls, which one places these little darlings under your pillow at night to take away your woes. As time is getting on Mummy is worrying that I haven’t found my Prince yet so hopefully my bulk order of worry dolls will alleviate her stress. And she can give some to Daddy too, who seems to have given up entirely on ever marrying me off.

Right darlings, back to that life-changing moment I alluded to earlier. As soon as one popped her Prada boots at the foot of El Castillo, Temple of Kukulcan one was (unusually) at a loss for words, and revitalised with a new sense of purpose. Upon this monumental sight, one received her calling in life as a voice gently whispered: “Lady Perdita Fitz William Tudor Croft, it is time to pack away the Prada, Chanel and Fendi, and don the khaki, hiking boots and fedora. Go forth and discover the Eighth Wonder of the World. And no, we don’t mean Christian Louboutin’s platform shoes. Immerse yourself in the world of archaeology, develop the skills to explore ancient sites and learn about the many eras of history...and dig for gold.” One could have sworn it was that Harrison Ford chap when he played that dashing hero Indiana Jones. Swoon…

Fast forward to the flight home. One had 10 hours to kill, so with laptop open one Googled ‘how to become Indiana Jones’. Using Daddy’s credit card, I promptly signed up to an Open University course, purchasing all the necessary equipment and attire faster than you can say ‘Temple of Doom’! If he complains, I’ll tell him I’ll be learning how to dig for gold. I somehow think he’ll approve, especially if I’m not getting married anytime soon*.

* I have a cunning plan, which I obviously don’t want to go into too much detail about here, but there’s a certain wedding happening in Windsor this weekend. Wouldn’t it be tragic if someone were to burst in when they get to the bit about “any lawful reason why these two people should not marry...speak now or forever hold your peace”?! Watch this space! 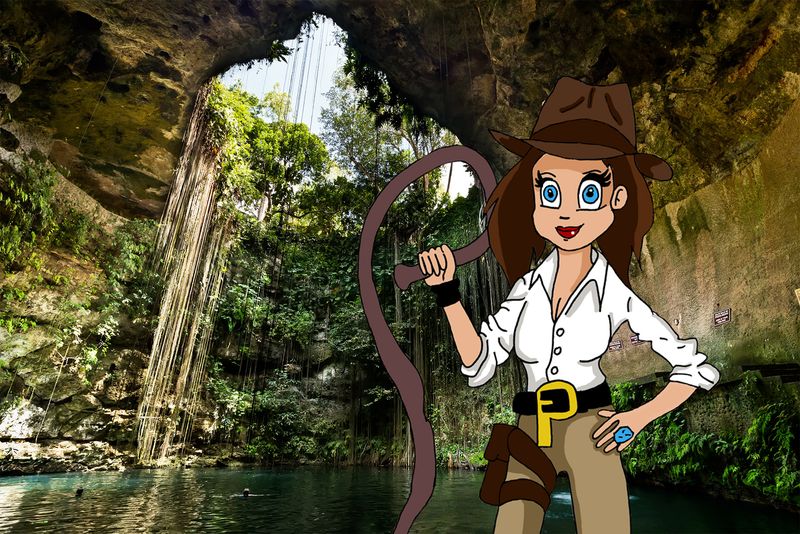 Bearing in mind the Mexican wisdom of ‘Tequila probably won’t fix your life, but it’s worth a shot!’ I couldn’t help but giggle after my umpteenth miniature bottle of in-flight Tequila, at the thought of the Fed-Ex man’s expression as he delivered a mountain of items from Army Supplies instead of Net-A-Porter, Harrods and Chanel.

Hereby is my heartfelt declaration, that I, Lady P, am on a quest to become the most famous archaeologist in all of history (watch out Indiana). My first discovery shall be to find El Dorado, the lost City of Gold. Daddy says I have more chance of finding that than ‘finding a rich enough fool’** to marry me. I’ll show him!

** I overheard Daddy on the telephone to his former mechanic, Jeremy Clarkson. Something about ‘if we can get Lady P in the studio, give us the answers in advance Jezza ol’ chap, and she can be your next posh poster girl for Who Wants to be a Millionaire’. I didn’t hear what darling Jezza said, but Daddy has instructed the butler to replace the broken telephone in his study...

One must dash off to go study some old relics, “no, don’t worry Daddy. Not you. You’re quite safe!”

And as another escapade draws to a close, in the words of the old Spice Girls (**gossip on the grapevine** they’re the cabaret at my beloved’s nuptials this weekend), I shall bid you “hasta mañana” and await instructions for my next secret mission.