Bonjour my fellow rays of sunshine, although one sits here, ever so slightly heartbroken now that her ginger prince has ridden off into the sunset with his beloved. Despite not receiving an invite to the nuptials in Windsor, there was no way was this amorous aristo going to admit to that. So in true Lady P brilliance, one set about making a cunning plan.

One managed to style out the whole debacle by acquiring an official royal wedding gift bag. Snaffled for an absolute snip at just over £21k courtesy of eBay. I know the gift bags were for the members of the public (drawn from a lottery) and seated outside the chapel, however I’m not letting such a trifling detail get in the way.

My fellow Sloaney Pony, gal pals seem to have bought my reasoning that ‘it would be too déclassé for me to be sat under the same roof as my ex - a certain Hollywood silver fox star - accompanied by his international human rights lawyer wife. So I respectfully declined the chapel invite, in favour of mingling al fresco’.

I digress. Who would have thought you could buy such stuff? eBay has been a revelation I tell you! One didn’t even know such a place existed where one can buy all manner of things, and you can even get to bid or haggle with a ‘best offer’, which brought back many fond memories of that Moroccan bazaar where one bought a stash of silk pashminas, in every conceivable colour, for a pound a pop! 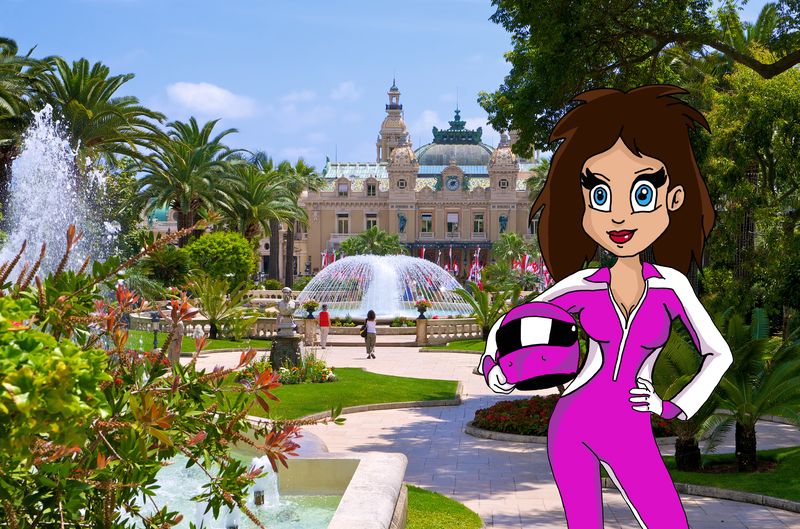 Decency and Daddy’s threat to disinherit me prevents me from revealing any more memories from that particular trip. Suffice to say eBay is now one’s favourite app. Well that, plus a shortcut to Selfridges via Uber...

With one’s supposed presence at the wedding ‘in the (gift) bag’, literally and metaphorically, and some very clever photoshopping courtesy of some clever chap Daddy knows in Silicon Valley, one dried off one’s tears, and jetted off to Monaco for some F1 fun. And maybe a little flutter at the casino tables.

After enduring an extremely bumpy helicopter ride, one was left rather shaken, but not stirred. But after checking into one’s home from home - Hotel Paris - I was instantly calmed by the luxurious surroundings, an in-room massage and the not-so distant roar of car engines, from the Circuit de Monaco, as those doyens of speed raced around the streets of Monte Carlo in their super fast cars.

The high octane scent is evocative like nothing else! It so reminds me of Knightsbridge in the summertime, when those darling chaps from the Middle East fly their supercars over, and use Central London as their own personal racetrack. One way or another, they burn some serious rubber around town in the summer months!

It’s so much fun to ‘ride shotgun’ with them. #SquealsOnWheels I like to call that time of year! The Met Police are so like the Ant Hill Mob in their hot pursuit of us in their little underpowered police vans. I feel just like Penelope Pitstop from the Wacky Races. She is such a style inspiration for me at times like this!

But enough of my previous racy adventures. Time for some new ones! It was time to soak up the atmosphere and join in the F1 fun and frolics. Suitably pampered and revived, it was on with the racing attire - au revoir Lady P, bonjour Penelope! - and time to board Daddy’s friends’ yacht. (We never mention his name as he’s not very popular since his little homeware shop closed, it was quite the scandal you know). Tho his grandson’s daddy brings a certain ‘je ne sais quoi’ to the party too...Bet family mealtimes are a blast in their penthouse!

However, principles aside, a day on a superyacht quaffing champagne on the upper decks is not to be sniffed at. And when one has the chance to get up close and personal with her newest and latest crush, Lewis Hamilton, #swoon, it really is - as Daddy carefully briefed me - the perfect hunting ground and opportunity to seek out perfect husband material. Daddy’s financial adviser says he (Lewis) ticks all the boxes. And a few more besides... 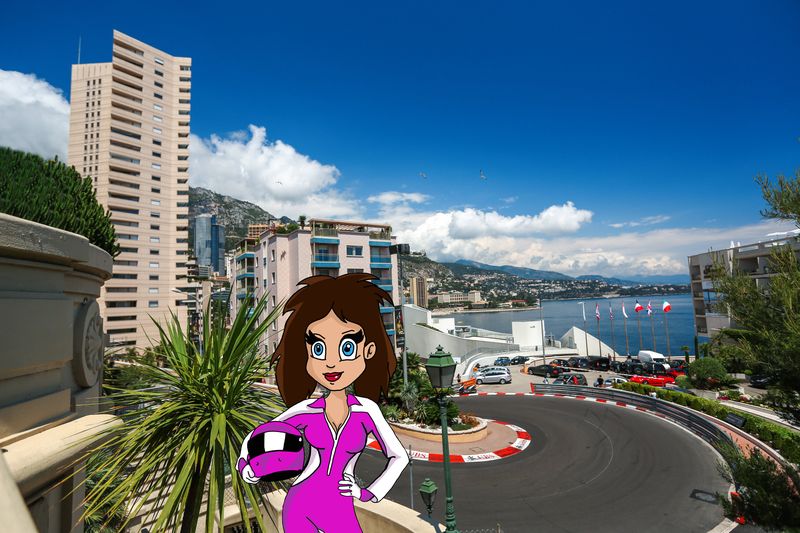 And while he is tinkering around in the garage and racing his cars, one can occupy her time with shopping and other strenuous activities. JACKPOT!

This time around, darling Lewis finished third; the driver who won was some Australian chappy called Daniel, who drank champagne out of his sweaty shoe. Ghastly! One recoiled in horror as he not only offered a sip from it to Prince Albert, but had already sprayed his lovely wife with the celebratory fizz.

Unfortunately, Lewis couldn’t make our pre-arranged date. Mumbled something about having to wash his hair that evening, and an early flight, as he needed a full two weeks preparation for the Canadian Grand Prix.

Neither shaken nor stirred, or undeterred! one hot-footed it to the Casino to try her luck there. Mindful of how great-uncle Rupert bet (and lost) at the Casino, one of the larger English counties previously held by our family, severely denting the family inheritance, I decided to play it cautious. 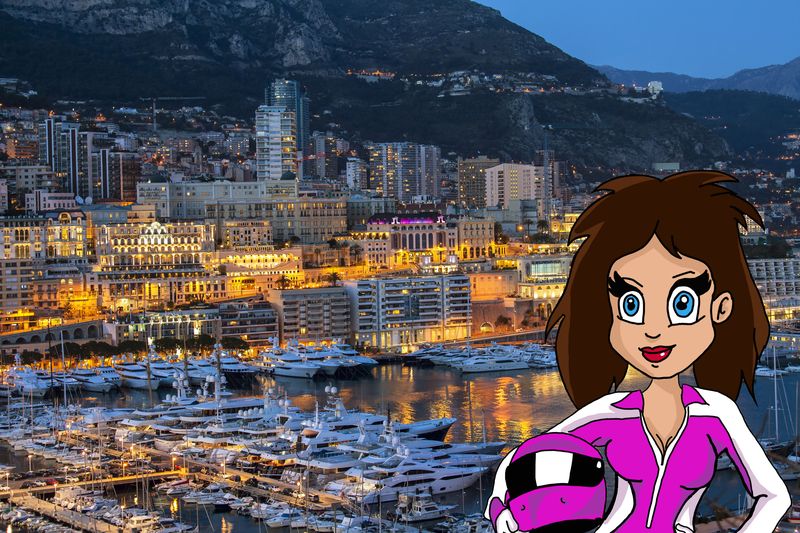 Although Daddy putting a freeze on my cards slightly thwarted my plans to have a modest flutter too. Apparently me trying to book a first class flight to Canada the next morning to accompany my racetrack Romeo, set off alarm bells at Daddy’s bank. Does he want to marry me off or not?!? I shall be having stern words when I get home. Or maybe I shall ask Mummy to speak to him for me.

Anyway. Where were we? Ah yes, watching casino punters betting away their inheritance at the crap tables. What a fascinating, eclectic, international mix a casino attracts. One hears all sorts of languages spoken, and it can be quite difficult understanding someone with broken English.

I’m pretty sure one gentleman I spoke to was a Frank Sinatra fan, as he kept referencing the Sinatra song ‘Luck be a Lady’. Well I think it was his dice he was asking me to blow on. Although it does get quite noisy in these places, making it a tad difficult to understand heavily-accented English… Ho hum!

After politely declining his offer to ‘blow on his dice’, I was rescued by *the* most dashing little man. And over many a cocktail - a vesper martini, what else?! - he rather indiscreetly divulged he was working for Her Majesty’s Secret Service. I didn’t tell him that Her Majesty was nearly my future grandmother-in-law, as I’m not one to name drop… 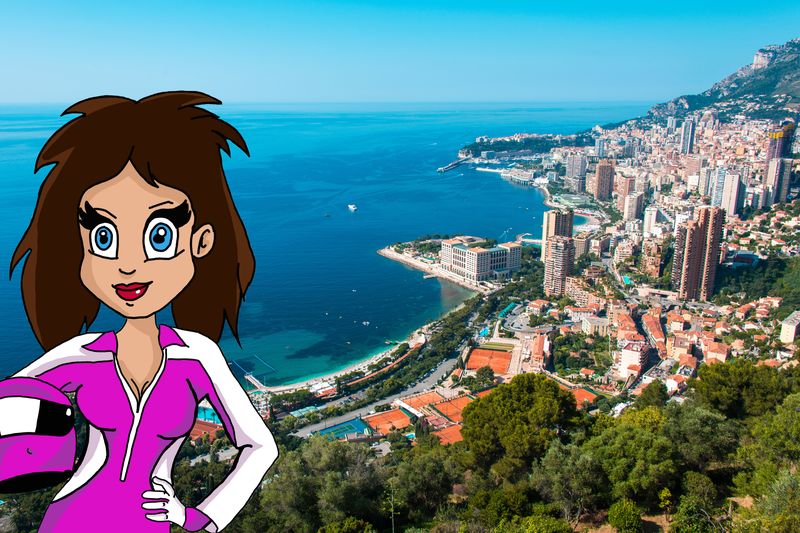 He went on to reveal that because he is not the tallest of the ‘Double OO’ agents, his nickname back at HQ is 003 and a half! I would like to categorically state on the record here, that I, Lady P, can confidently vouch that he is most definitely NOT half the man that James Bond is. And it has absolutely nothing whatsoever to do with his wisecrack that ‘Viagra won’t make you James Bond, but it will make you Roger Moore’. Anyway. I’m more of a Sean Connery gal myself...I do love it when a man has a hairier chest than mine!

Oh gosh. Is that the time? Airport here I come. Oh goody. I see the in-flight movie is one of my all-time faves! Austin Powers: The Spy Who Sh*gged Me. Now who was it that said art imitates life? Or does life imitate art?!?

On that philosophical note, I’m off to fill in the forms for my Open University archaeology course. Au revoir my little petrol heads.