This month, one was going to greet you in Russian, however, not even this well-travelled linguist can get her tongue around it, with or without some help from the local vodka! And goodness knows I’ve tried hard enough. It’s more complicated than when Daddy gets my credit card statements and tries to reconcile all the different currencies I’ve been spending in. So “greetings and salutations from Russia!”

One was initially a tad miffed to find out she wouldn’t be getting sent to Wimbledon to indulge in SW19’s finest strawberries and Pimms, while hovering near the Royal Box. I had heard on the Sloaney streets that there’s some highly eligible minor royals in attendance this year, covering my Ginger Prince’s sporting duties while he spends more time with ‘she who shall not be named’! Social Siberia beckoned!

But any disappointment soon evaporated, turning to unadulterated delight when I received my latest assignment from #TeamHeaven. I would be jetting off to Russia with the England football team for the World Cup.

Just imagine one’s excitement at travelling in such close proximity to so many fit, dishy sportsmen for several hours?! What fun and frolics we had! However, one shall keep schtum so as not to antagonise Daddy any further with one’s antics or he may actually follow through on his threat this time and disinherit me for good. 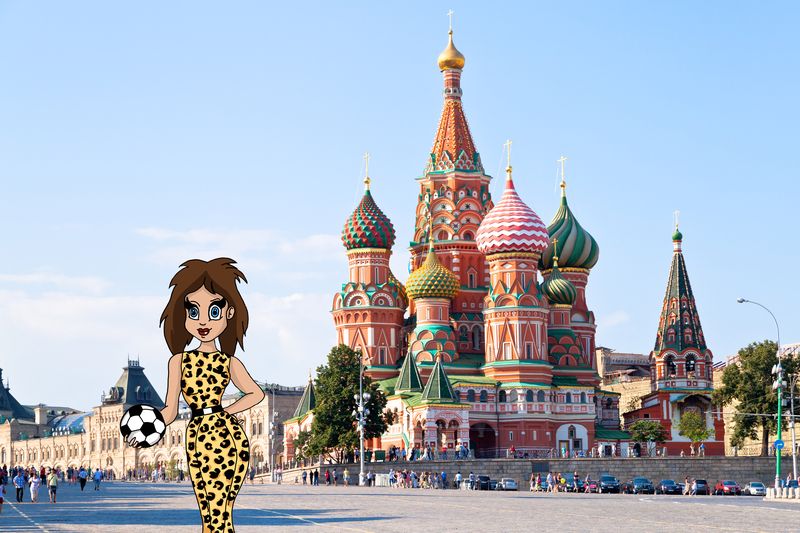 Daddy said something about “you’re already on a yellow card”. “One more you’ll be getting a red one.” I’m more than a tad confused, as the only cards I have in my wallet are black and platinum. Do you think this yellow/red card stuff is a new credit tier for only the select few?! If it is, then one had best stop chatting, and get spending to the max so one can qualify!

In support of the England squad, one decided to do her homework and research what these dashing chaps would be wearing so one could coordinate herself seamlessly.

Turns out that they wear a shorts and jersey top combo, with three lions emblazoned on the front. On hearing the word lion, one’s thoughts immediately turned to Roberto Cavalli’s latest animal print inspired collection, so it was a natural progression to go full pelt with the leopard print - after all, leopards are part of the cat family, non?! As a result, the journalists in the England squad’s entourage took it upon themselves to call me Pussy Galore. Such wickedly witty chaps! 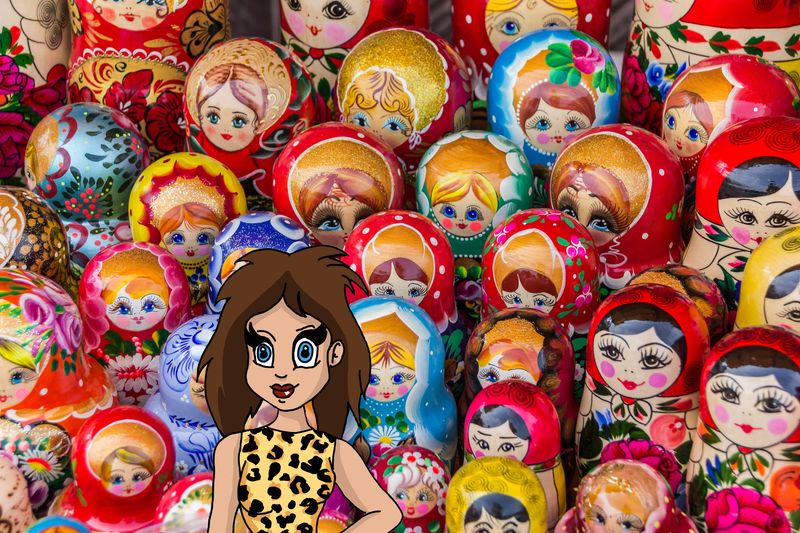 Getting to the game in hand. Can you believe they put me on something called a terrace? It sounded awfully glamorous, like the ones I frequent by Lake Como, until I realised the terrace was made up of tiered concrete and plastic seats filled to the rafters with the most peculiar of folk. I don’t know who did their makeup, or should that be face paint? but it was rather shocking to see quite so many garish colours in one space and face!

Thankfully, one had the foresight to pack a pashmina in case it got chilly. Fortunately it stayed warm, but one was able to usefully redeploy it as a seat cover to protect one’s Cavalli-encased derrière.

Now if you fondly recall my escapades at the Munich Beer festival, you will know that a touch of jostling and noise wouldn’t throw this gal off her stride. But this? This was on another level! Quite frankly one was mightily relieved to leave the terraces and hot-foot it back to the hotel for some peace, relaxation, room service caviar on blinis, all washed down with some ice cold vodka and a large glass of fizz.

Charming as the footballing fraternity is, whilst one might have been in Russia, one was in no rush to return to the terraces! With so much free time, what is a single gal to do in Russia? 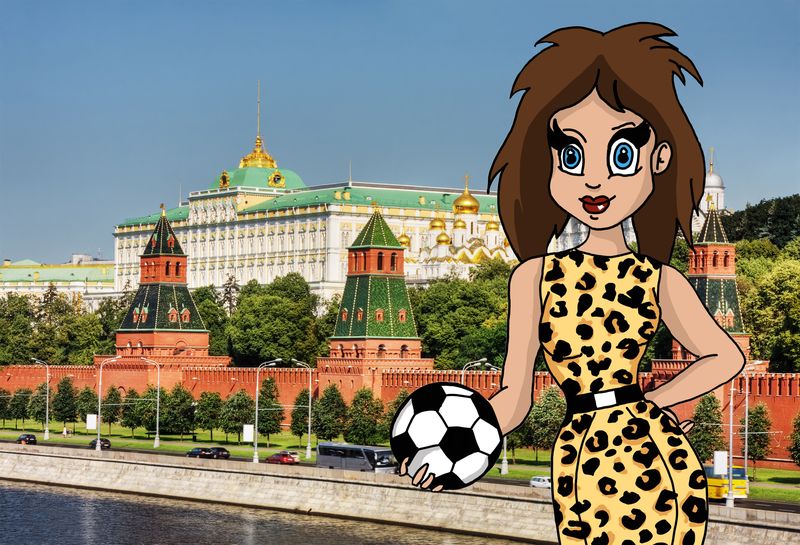 With everyone on their plastic seats, singing, shouting and screaming in all sorts of languages at some poor chap with a whistle (he must be exhausted running after so many players, I know I am!), one had carte blanche over the relatively deserted streets of Moscow.

When visiting the Med it’s all about the S’s - sun, sand, sea, sangria...How to replicate that here? Sport, sightseeing and shopping?!

On a whistle-stop tour of Moscow, one was beguiled by the glorious, ornate, multi-coloured architecture. One of its Churches had swirly ice-cream looking turrets which were so pretty and colourful. Obviously one had to take a selfie!

While it was tempting to visit the Kremlin, one thought better of it, not least because I was wearing a top saying “I have one nerve left, and you’re getting on it”. With all the furore back home in the UK with this nasty Novichok nerve agent business, this may have caused a teeny diplomatic incident. Never let it be said that I’m not well-informed or culturally sensitive about current affairs. Also, one hasn’t packed for a stint as a prisoner in one of their Siberian salt mines! Maybe next time, with a bit more notice…

After sightseeing, Snapchatting, and Instagramming my way around Moscow, it was time to do some shopping. That red card is in one’s sights - can already feel Daddy’s pride as we catapult into the elite! 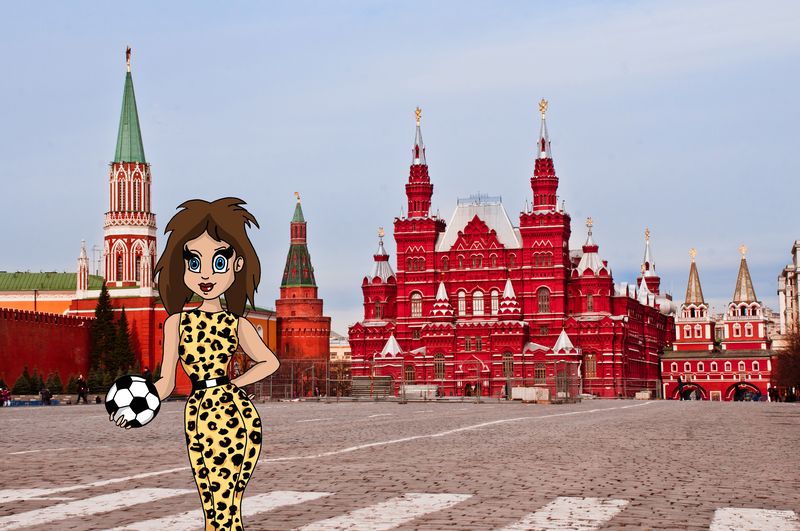 With the stadium full and the streets almost empty, the lure of an almost empty shopping centre was irresistible. With staff dancing attendance on me with clothes, caviar and champers (lucky if one can get sparkling water these days on Bond Street, or maybe Daddy’s financial reputation precedes us?!) one felt like Julia Roberts’ Vivian Ward in Pretty Woman!

To slightly digress, one of the high society glossy mags recently did a feature asking if ‘she who shall not be named’ had taken a sartorial leaf out of Vivian Ward’s spotty frock polo attire and comparing the two? Can’t see too many similarities myself. And there’s absolutely no comparison between my Ginger Prince and the silver fox Mr Gere.

However, after a v v productive afternoon with the Muscovite shop assistants, one went back to her hotel laden with [shopping] bags, but not - if certain elements of the press and polite society are to be believed - with quite as much baggage as others in our midst have. Oh dear, I had better stop now before these delicious Moscow Mule cocktails kick in, and my mouth runs away with me, getting me sent to the Tower!

Daddy on the other hand, can be terribly proud, as one has hit upon a wizard wheeze of him partnering up with his Savile Row tailor to produce a line of waistcoats. And it’s thanks to a certain England manager, Gareth Southgate, heeding one’s advice to become more gentrified. He has done for waistcoats, what snooker once did for this oft overlooked wardrobe staple. Well played sir. No fashion own goals on his watch! 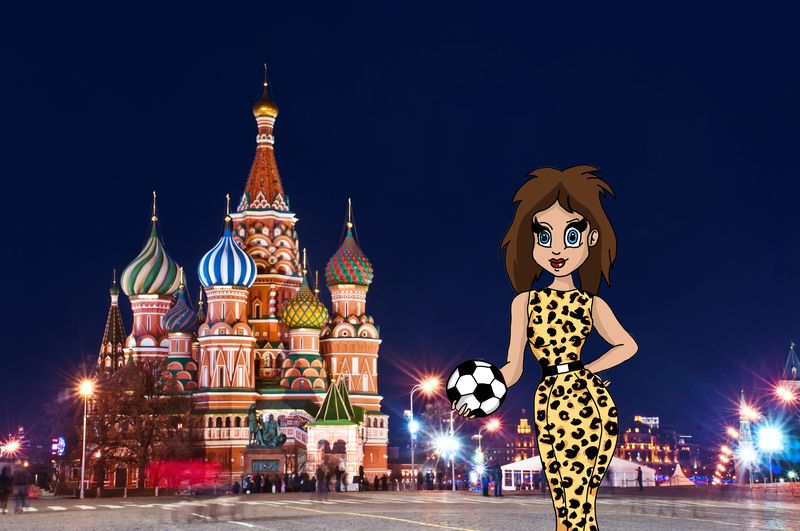 To conclude one’s exciting match with Russia, which went into extra time and some (financial) penalties: Lady P 1 - 0 Russia.

She came - on a disastrously lowered allowance;
She saw - just about surviving her first ever football match; and
She conquered - every designer store Moscow had to offer!

Would one have a rematch with Russia? As a certain Mr Connery would say, never say never again!

Until next time jubilant football fans! Have absolutely no idea whether France or Croatia won the World Cup, as one’s eye is already on those chaps in lycra at the Tour de France. Tho one is curious (and, ummm, ahem, asking for a friend…), what with Belgium not reaching the finals, whether their assistant coach, the rather dapper Frenchman, Thierry Henry, will need consoling in the Alps this summer? Ooh la la! Tally ho! Toodle pip!

From Russia with love,
xx