‘Tis the season to be jolly and goodwill to all men (and women). However, there wasn’t much goodwill to be found with this gal upon being told where I was to be deployed this month!

I must confess to having a teenie, tiny tantrum when I was told my latest assignment was to Lapland. Thankfully for all concerned, further tears were spared when Emma informed me that even though my wish for a fabulous pre-Christmas ski-break would be supplanted by Lapland, that my intrepid efforts would be rewarded next time with...Drum roll please....Little ol’ moi would be sent to some exotic, far-flung island where I could relax in the sunshine, whilst quaffing champagne and various cocktails.

Crisis and tantrum averted, pacified with something quite glorious to look forward to, one decided to ‘suck it up’ and hop on that plane to Lapland, to enjoy all that it had to offer. Which wasn’t very bloody much if you must know! No shopping whatsoever - only Daddy will be pleased to read that... 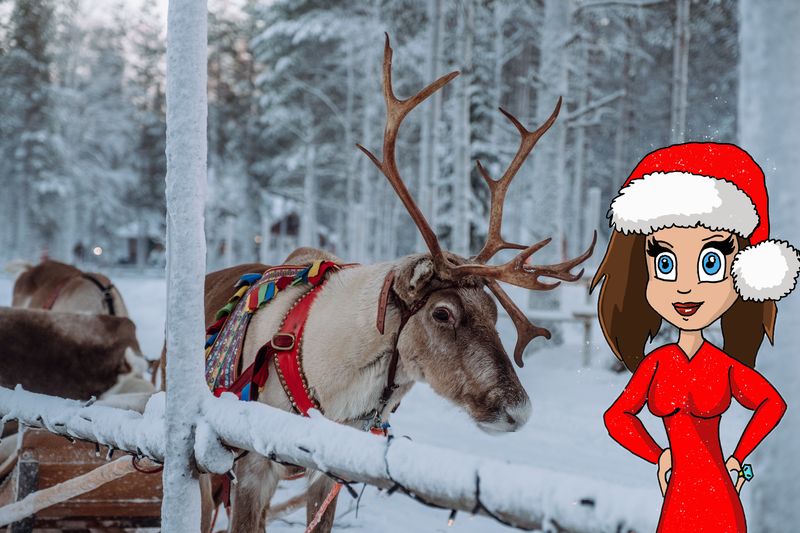 There was snow. Lots of it. Not that one minds a bit of snow, as the family regularly takes the piste every year. So one was well equipped with thermal undergarments and what-not, so managed to navigate the tricky stuff, freeing me up to experiment with the many colourful outfits, taking me off the naughty list, and straight into Santa’s good books.

There were lots of furry animals - reindeer in particular. They decorated them very well with bells and some utterly fabulous studded leather harnesses. All rather Fifty Shades if you ask me. Ooh the thought of being trussed up by Mr Grey has got one’s pulse racing. But I had better ‘rein’ it in, if I don’t want to end up back on Santa’s naughty list!

One plucked up the courage to take the reins and brave a sleigh ride with the reindeers. It was all rather invigorating, dashing through the snow, tucked up in the latest ski wear. Forever the fashionista, with the snow gently falling. Very picturesque and ‘Last Christmas’ - I love a bit of Wham, so to speak...One was slightly overcome with sentiment and Christmas cheer which was rather odd, as there wasn’t a single glass of sherry involved.

Emma and her team had even arranged for me to meet the main man himself, Father Christmas. One was rather excited at the prospect of meeting such a powerful, hard working and well-loved legend of a man. And almost as excited when I go to a Palace garden party in pursuit of my prince! 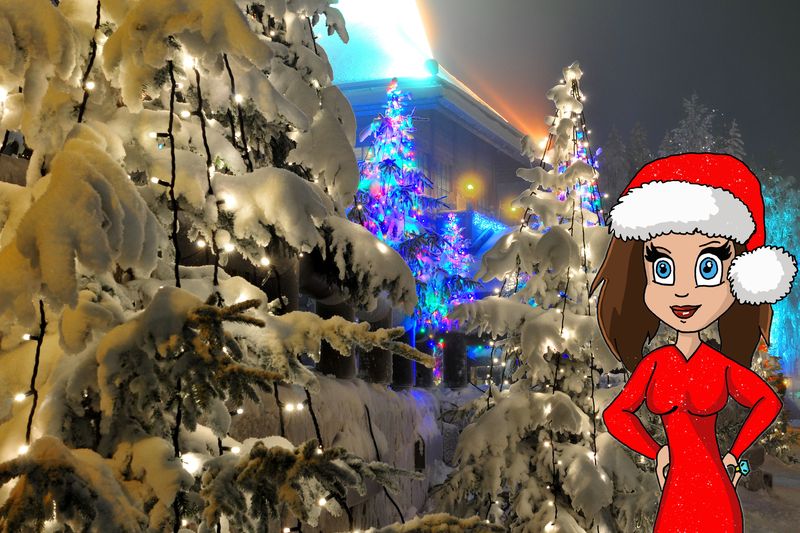 Unfortunately he’s just a tad too ‘mature in years’ for this starry-eyed gal, and although one is looking for someone financially stable to keep me in the life one has become accustomed to, with lots of free time to have fun with, there’s simply no chance of me hitching my sleigh to Santa. Call me shallow but he is rather portly, perhaps he should put a gym membership or personal trainer on his Christmas list?!

As much as I love a bit of facial fuzz - my ginger prince converted me to that - Santa’s beard could do with a bit of a trim. I wonder if our former stable lad and dog-groomer, Nicky Clarke, now an award-winning hairdresser, could do anything with it. And what’s with Santa wearing red all the time ? It’s not exactly flattering is it?! Navy or charcoal grey...Maybe with a bit/lot of work he could be a possible contender, especially now I’ve relinquished my claim upon the ginger prince.

Despite his unorthodox appearance, Father Christmas was a delight to meet – even though he only granted me a mere five minutes to tell him what I wanted for my Christmas stocking. 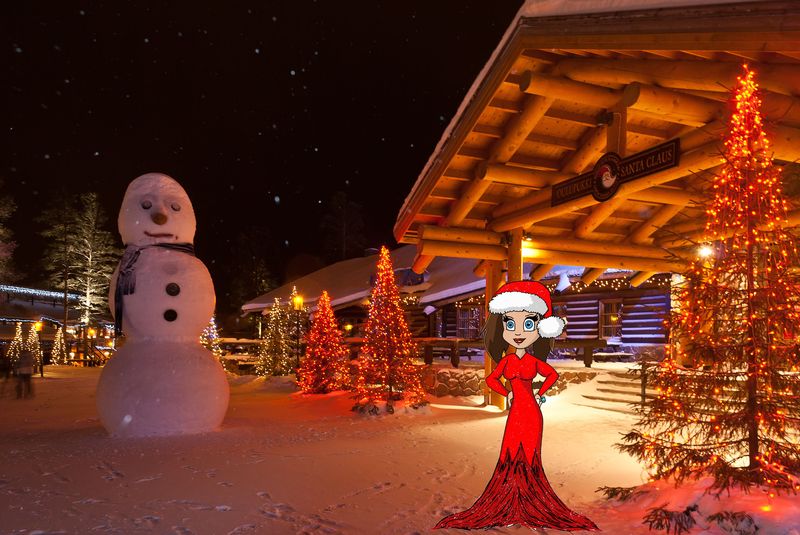 The only awkward moment was when he bounced me on his knee. One had hazy flashbacks to the times our handyman and Mr Fixit - Jimmy - would insist I sit on his lap having tightened some nuts earlier in the day. He was a silver-haired old man too, and I think he might have been exhibiting early signs of dementia as he would often forget where he had put things, particularly his hands, which often turned up in the most inappropriate and strangest of places! Anyway, I digress...

If Lapland by day seems magical, by night it simply comes alive, with thousands of twinkling lights transforming it into a scene from a fairytale. One got a little carried away, especially after downing a substantial amount of eggnogs and hot toddies. Thank goodness we were surrounded by snow and ice, as I almost burnt my fingers whilst roasting Santa’s chestnuts after some elves had refilled his sack.

The snow finally stopped, the skies cleared, leaving one completely overawed to see the spectacular Northern Lights at such close quarters. Now many of you will know that one has a penchant for all things shiny - and this spectacular Aurora Borealis has to be the most glorious sight one has seen in a very long time.

They were utterly mesmerising and I’m not ashamed to say I teared up a tad, becoming quite emotional as this majestic light display danced across the skies, enthralling and entertaining all who gazed up in sheer wonderment. There were more sparkle and stars than the Oscars and an entire series of Strictly Come Dancing combined darlings! 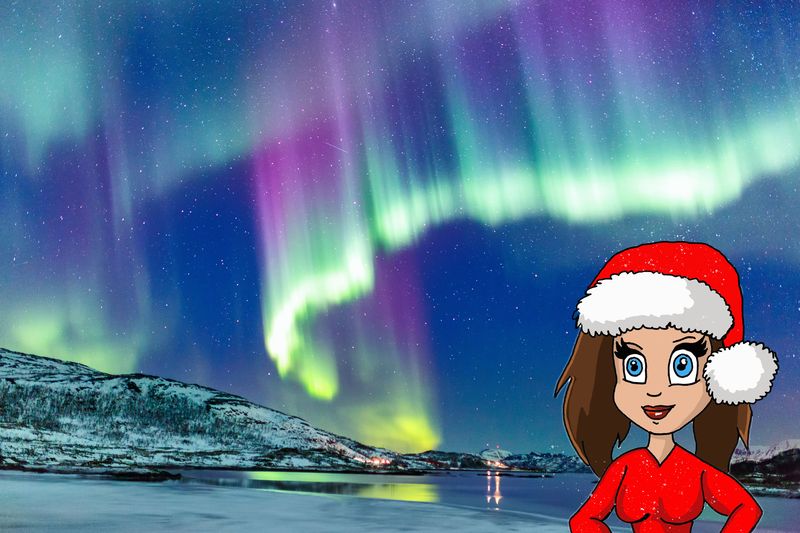 It was so spellbinding, one did contemplate sleeping under the stars to take full advantage of the experience, to maximise one’s viewing pleasure.

However, the probability of waking up with frostbite, or worse, not waking up at all, swiftly put a halt to that romantic yet foolish notion. Missing a digit is not a good look, especially when wearing one’s rings of bling; and missing toes are even more of a problem! How on earth would I be able to wear peep toes?

Much as I love the colour blue, I didn’t want to look like a frozen Smurf, or end up in a deep freeze. One isn’t quite ready to shuffle off to one’s estate in the sky just yet. Instead, one did the (unusually for me) sensible thing and filmed it on the iPhone. Apparently it’s now in the cloud and I can retrieve it whenever I want. What a terrific idea. What will they come up with next?!

Anyway, it’s time to bid adieu to Lapland and 2018, and say HELLO to 2019 and whichever mystery locations Emma is sending me to next. 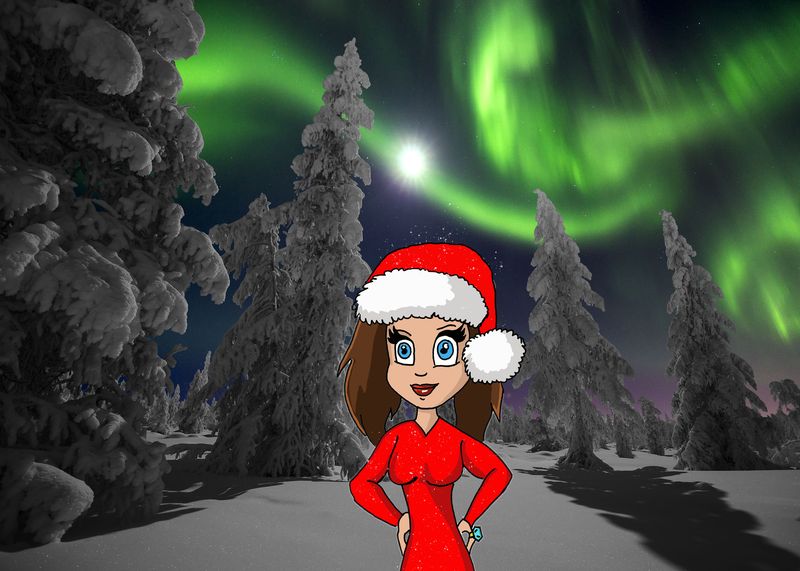 Anticipation is building and one’s mind has gone into overdrive with the excitement of the unknown, so one is off to instruct Bridget on what supplies this gal needs for an exotic island getaway. Toodle pip my darlings...

Darling girls, much as I love a good snog and eggnog, Lapland isn’t what one would call a happy hunting ground for an eligible bachelor.

I don’t want to sound like too much of a demanding diva here, but I seriously hope that I won’t have to stamp my Jimmy Choos (again) over my next assignment. If any of you think the Isle of Wight or the Emerald Isle are exotic islands, I shall not be pleased. Although I wouldn’t be averse to a little visit to Ireland while the Six Nations rugby is on, as I’m reliably informed the sport attracts an embarrassment of riches, in more ways than one.