Greetings my fellow muggles! And from that greeting alone you will have probably gathered what one’s assignment entails this month!

Having had to verrrry reluctantly decline the invitation to Joanne’s (that’s JK Rowling to you and me) birthday party at the end of July, #TeamHeaven HQ didn’t want me - or them (vicariously) - to miss out on any more Hogwarts hilarity.

They wanted my own special take on all things Harry!

Initially my heart skipped several beats, as I thought it meant getting up close and personal to my ginger prince in shining armour and a waxy Barbour. You know how much he’s cast a spell on me!

After the palpitations had subsided, on re-reading my assignment, I saw that I was to temporarily park my passport, and had been tasked by the Harry Potter fangirls and boys to explore the World of Harry Potter at the Warner Bros. Studios in London, to tie in with this month’s emmaheaven.com “The Land of Make Believe” issue. No mention of Bucks Fizz tho, in physical or liquid refreshment form... 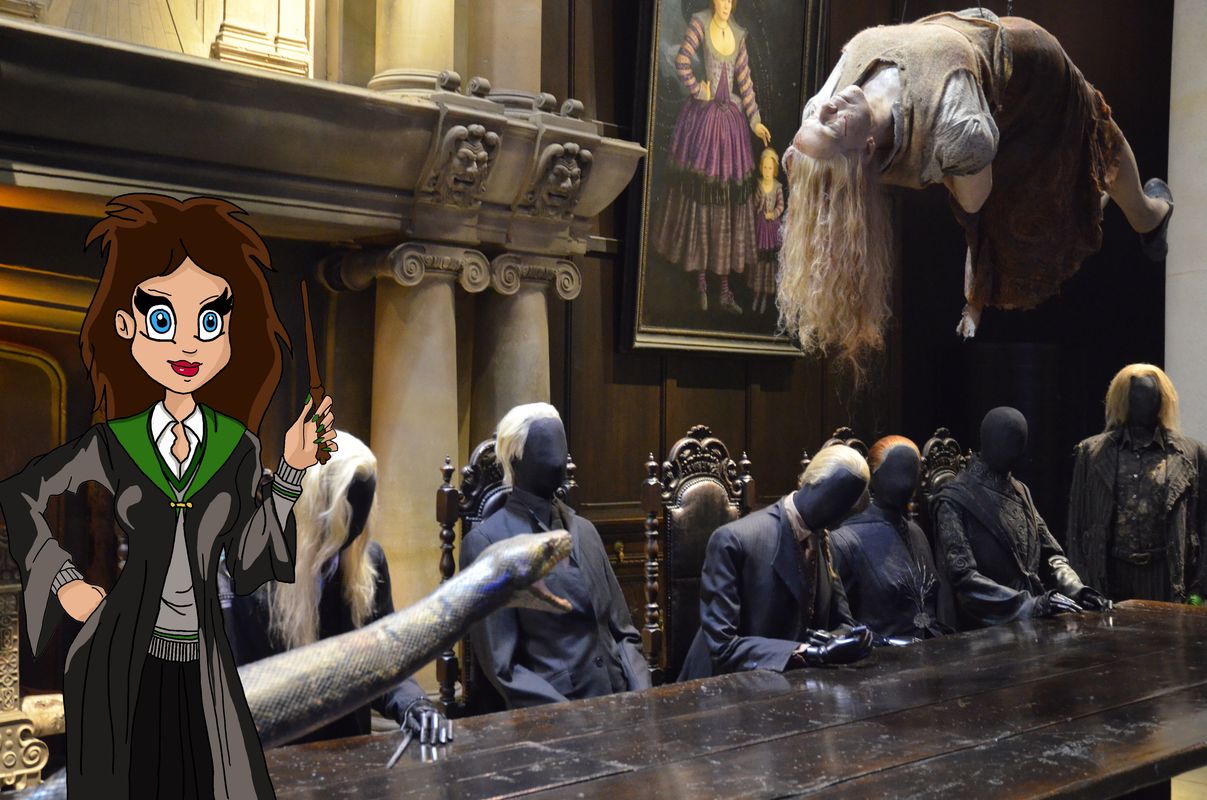 Being the conscientious sort that I am, and as many of regulars will know by now, one throws herself into any given assignment with gusto. This called for some serious legwork and homework to be done.

A brisk browse through my contacts, I found the perfect tutor, and promptly bribed my rather dashing, but caddish, intellectual friend, Lawrence, whom had studied English at Eton where he slummed it in the dormitories as a weekly boarder.

Although I too went to boarding school, it was an all-girl establishment, not mixed, therefore one needed a male perspective on this.

Lawrence dutifully arrived, armed with such basic essentials as caviar and champagne for a marathon binge-fest of all eight Harry Potter movies, primed to educate me in all there was to know about their magical world. My heart leapt when I saw mention of the ginger Weasley, but soon sank when Lawrence gently pointed out that I was no longer a boarder, and was almost old enough to be his mother. 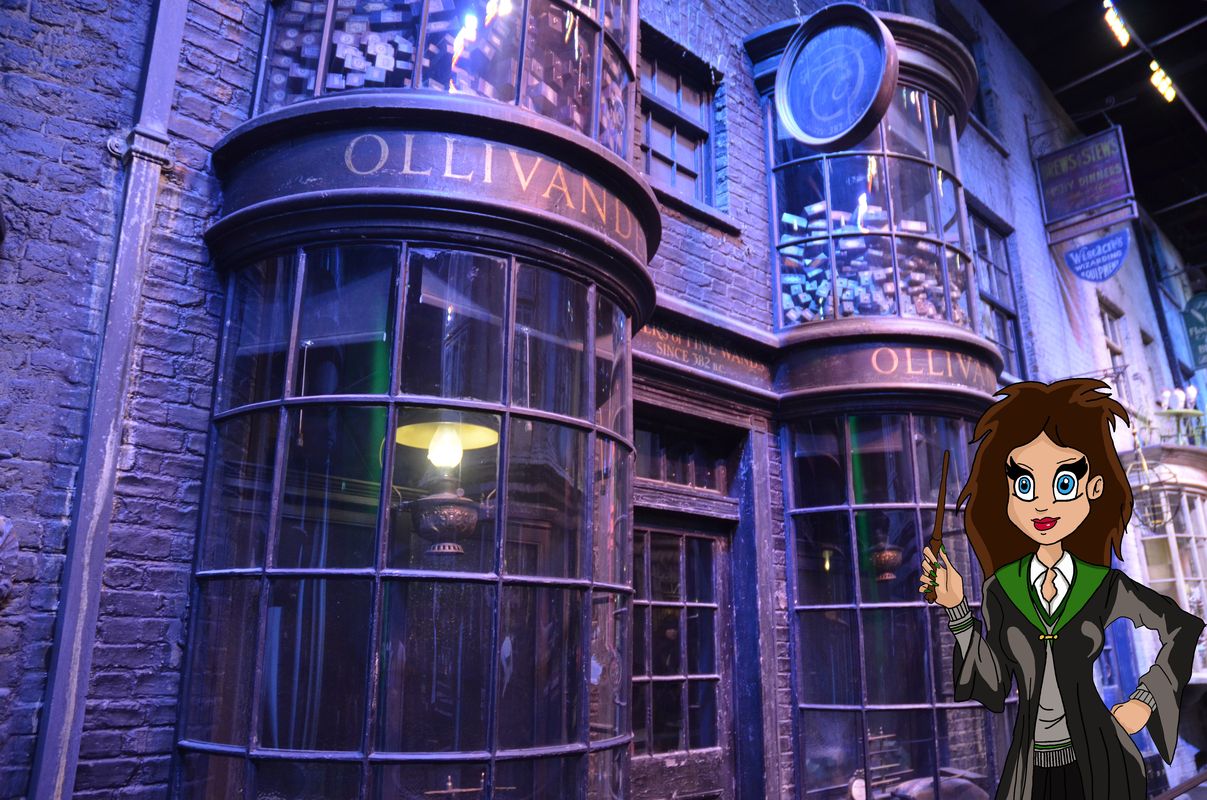 Before I was allowed to launch myself into the studios, Lawrence told me that we would need to be ‘sorted into a house’. This totally flummoxed me, as I couldn’t understand what was wrong with my current abode, or why he was laughing quite so hard when I asked which wing of the house (mansion actually, but one doesn’t like to boast *sniff*) I should relocate to?!

One felt terribly silly when Lawrence explained what “sorted into a house” actually meant… Oh dear, this could turn into quite a long day out and sorely test our friendship!

Apparently, Lawrence patiently explained, there are four ‘houses’ to choose from. Already feeling a little fractious, I couldn’t be bothered answering so many questions, so decided to look at the colour and animal schemes which represent each house. 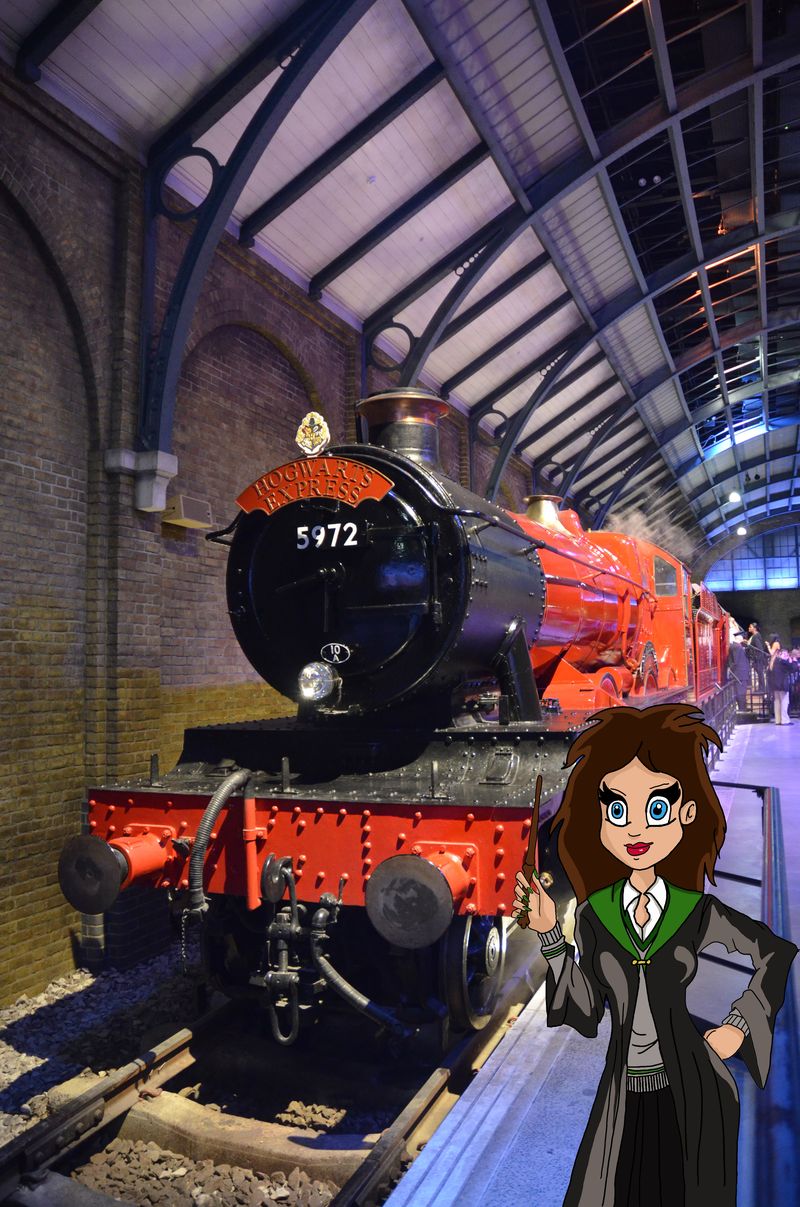 Suitably attired, one slinked off to the studios, where I was utterly overawed by the short video introduction. As if by magic, the screen was raised, and the door to Hogwarts and its hallowed halls was opened.

After stepping through, we found ourselves in the Great Hall, overwhelmingly giddy with excitement, taking a ridiculous amount of selfies in almost every imaginable position.

The tour guide had to drag me from the Hall before the next party’s imminent arrival, but one needn’t have worried or dragged her heels, as what awaited me inside was magnificent.

I looked on in amazement as the films came to life before our eyes: the gates of the Castle, sumptuous banquets, and one’s main passion in life...fashion. Such stylish wizard attire!

I may have been distracted for a moment or two, stood before the Mirror of Erised - one looked simply divine as one peered into the glass, and such great angles too.

One was sorely tempted to ask the manager if they could do me a good deal on this object of beauty: shipping costs/money no object. To help keep costs down, Daddy knows a wonderful man with a van - Eddie Stobart I think is his name - he’s always doing the odd job or two for him, moving our family furniture between the various English counties and estates. Alas a sale was not forthcoming, so back to the Architectural Digest it is in my quest for the perfect mirror. 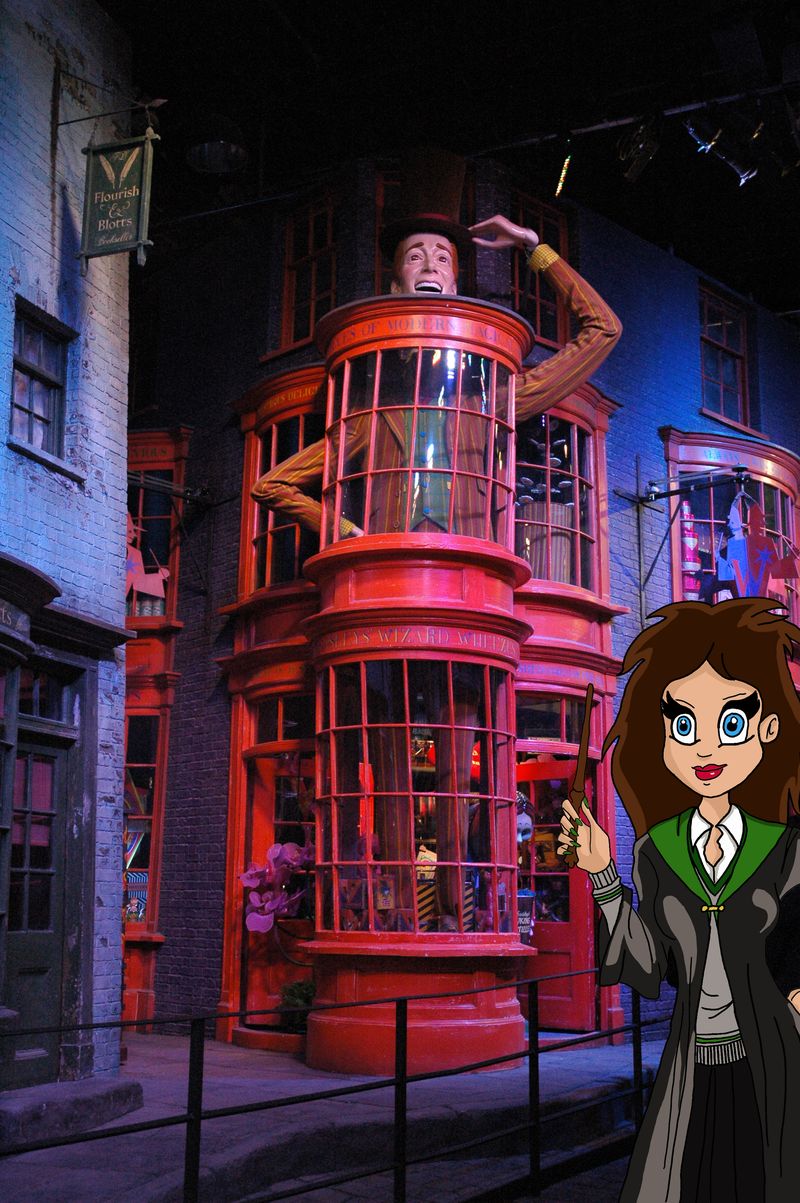 One felt quite surreal walking through Dumbledore’s office, the Weasleys’ cottage, Snape’s dungeon, and the Ministry of Magic. And even more delights were to come as one stumbled upon the broomsticks! One made her film debut, straddling a Nimbus 2000, flying through the Scottish glens. Our housekeepers would adore these broomsticks!

Next up on the tour, we found ourselves screaming and squealing through the Forbidden Forest, chased by Buckbeak and the giant spider. One was catatonic at the sight of all those hairy legs, with not even a decent rugby player in sight. On a positive note, I felt a little less self-conscious about my pending, yet long overdue leg-wax appointment for my hirsute shins and pins...

It was a huge relief to arrive at Platform 9 3/4 to admire the Hogwarts Express. It was reminiscent of a time when Daddy and I travelled on his favourite steam engine, the Flying Scotsman, en route to visiting the Highland Games. I’ve tossed a few cabers in my time, but those particular Games I recall being a real labour and caber of love...

Before switching family loyalties to the Orient Express, we used to be quite partial to a ‘Pullman’, until Daddy said I took it a bit too literally after he found me up front, yanking the train’s horn cord #WootWoot, while intermittently blowing on the guard’s whistle.

If memory serves, the guard seemed quite distressed as we alighted at the next station, yelling something about ‘his Thomas the Tank’, while Daddy muttered furiously about the Fat Controller derailing him into the sidings if he didn’t pipe down…Sigh. The golden age of steam.

Excuse my reverie, and slight detour back there. You know what I can be like for getting sidetracked!

Having acquired a bit of a thirst, we queued for a butterbeer, which was well worth the wait. It tickled one’s palate perfectly, and was pleasantly surprised that even after downing two or three more of these delightful tipples one didn’t feel the slightest bit tipsy.

Onwards we went! Not being overly fond of public transport, one didn’t quite relish the triple decker bus, but soon did a U-turn on spotting the charms of the SPFX studio beckon.

I don’t even know where or how to start describing the wondrousness of the special effects: a cute and cuddly monster book, the delightful Dobby, and lots of other weird and wonderful creatures. 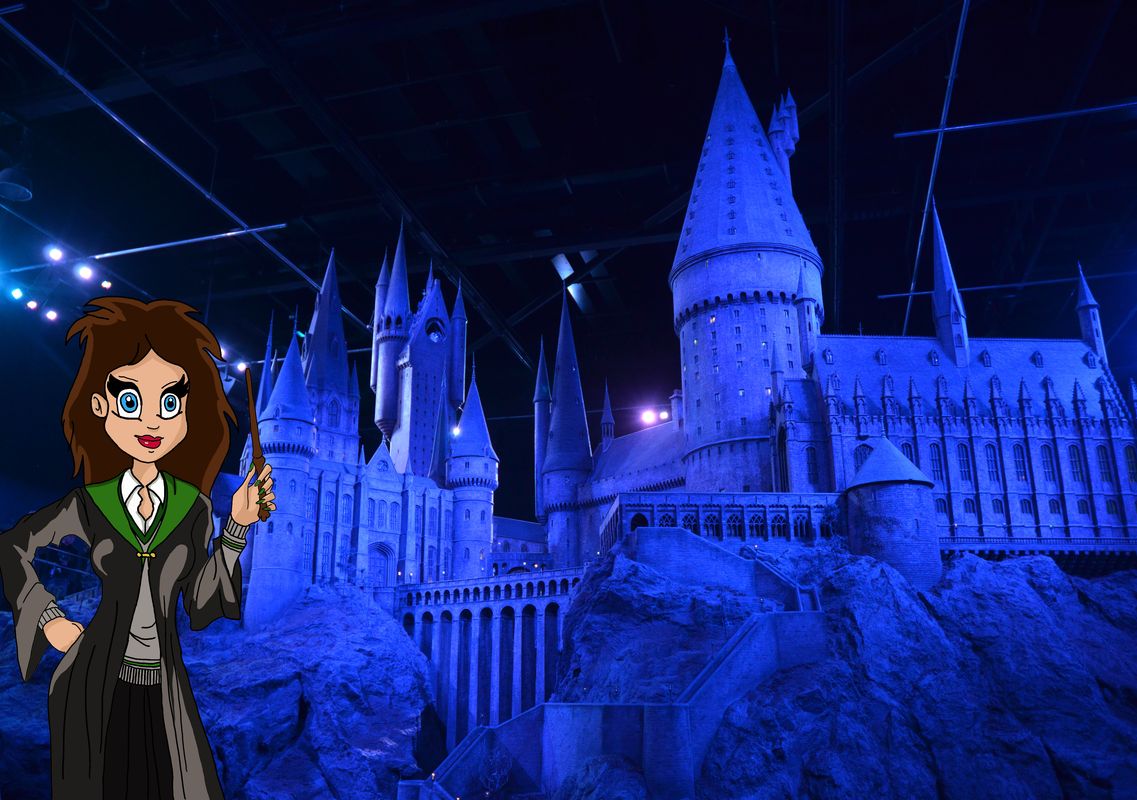 Diagon Alley blew one’s mind - as did the Leaky Cauldron, which is not as ominous as it might sound; it’s a rare day that one is rendered speechless, by what was most probably the pinnacle of our tour. As if we weren’t struck mute with awe already, when we turned the corner to see Hogwarts Castle in all its glory, we thought we would spontaneously and simultaneously combust!

Cue a gazillion selfies to record this momentous occasion as one didn’t want to forget even the tiniest of details, and look back fondly on such a magical day out.

The pièce de résistance was the souvenir shop! One is not ashamed to say that one’s black Amex took quite a hammering. Daddy will have heart failure when that statement comes through.

Without a trace of guilt or shame, one of everything was bought for my new Harry Potter room at home (in Daddy’s old study in the east wing IIRC). One is the ‘most Slytherin of Slytherins that ever did Slytherin!’

As for my chum Lawrence, I last saw him trailing after a Bellatrix Lestrange lookalike at Kings Cross station. All a bit odd to my naive eye, asking if she would take Amex as he was a bit low on ready cash...Anyway, he’s boxed and rowed at county level and can take care of himself.

Despite this month’s unusual urban surroundings, and far away from my usual summer playground of the rich and (in)famous, my continued quest for true love has not been entirely in vain.

Thanks to this latest assignment I learnt that the next heir to the dukedom and Alnwick Castle (aka Hogwarts), is a rather dashing young chap, whom is a more than adequate amour after my unrequited royal romance* bit the dust.

*Although hope springs eternal that she’s caught fencing the family silver, but a gal can’t put all her eggs in one basket.

Fingers and wands crossed that if my new wand doesn’t ‘expelliarmus’ the next credit card statement - potentially scuppering one’s summer’s sojourns - I think I just might be able to explain away to Daddy and ‘write off’ my Potter purchases as an ‘investment’ and ‘research’.

Daddy’s eyes will be on stalks when I tell him about the heir apparent to the dukedom of Northumberland and his net worth! Makes the titian-haired prince look like a pauper! Wish me luck dahhhlings...