You are cordially invited to our sumptuous Fashion Feast where you can devour our artistic and ingenious photo and video shoot.

Enjoy the madness, mischief and mayhem with #TeamHeaven while we indulge our creativity and watch the magic unfold...

“Fashion shouldn’t be taken too seriously. You’ve got to have fun with it to make it work!

Think of all the endless possibilities of what you can create. Let your imagination run riot. Have fun, glam up - Love it! Rock it! Own it!" 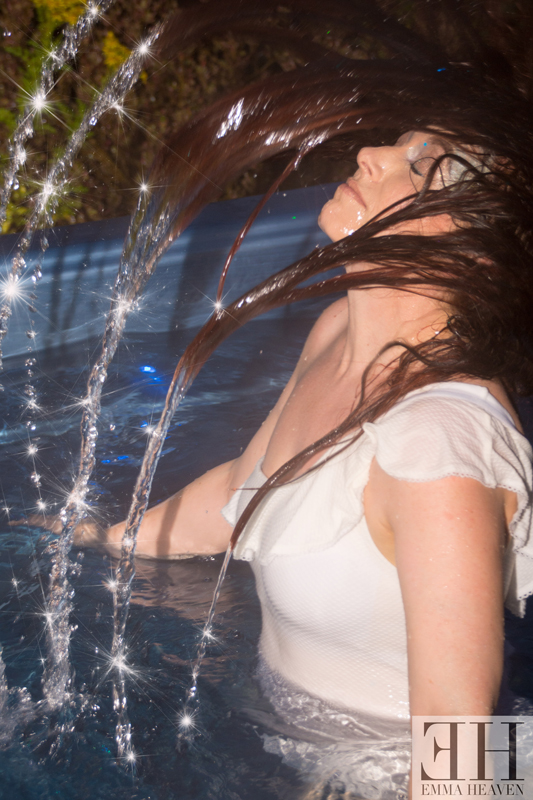 Hands or fins up - who wants to be a mermaid?

I’ve been fascinated by these beautiful, mythical creatures all my life. From watching the beautiful ones in the Disney cartoons, Peter Pan and Ariel from The Little Mermaid, to the nasty, evil, ones in Pirates of the Caribbean. They are mesmerising, magical and have an ethereal beauty...welcome to this month’s shoot...MYTHICAL.

Now me being me, I couldn’t just do an ordinary studio shoot. That would be far too easy. So in full overactive and creative mind mode, I decided that half the shoot would be done in the studio and the other half in our pool. So far, so good, and easy enough...in theory!

First we had the great British weather to contend with; although it’s August and supposedly summer, we have had non-stop rain for the last two weeks and the day of the shoot was no exception!

The next (im)practicality we had to manage involved the two new members joining #TeamHeaven - my son Jack who was going to fly our new drone camera ‘Dickie’. Don’t you just love the name Dickie?! We had so much fun with the naughty connotations it conjured up - unlike the (grey) sky, at least the air was blue!

So to sum up the scene for this edition’s shoot, we had rain, LOTS; me in a pool; lots of camera equipment outside; and an airborne ‘Dickie’! Standard shoot then!

Returning to the mythical mermaid theme, I needed a sensational sea-siren’s outfit.

After some slick, sartorial cyber-sleuthing with my dear virtual friend, Mr Google, we tracked down, falling hook, line and sinker for a mermaid skirt by a fabulous designer, GlitterFoxLA on Etsy. They made me a fabulous glittering, iridescent, sequined blue/green mermaid skirt, complete with train to replicate a mermaid’s tail. Utterly mesmerising. And bathtimes chez Heaven will never be the same again!

The white ‘Sir Hangs A Lot’ one shoulder cotton top by designer Rosie Assoulin paired perfectly with the skirt. The over the shoulder ruffles cascade spectacularly against the backdrop of the colourful skirt, giving the effect of a waterfall, accentuating the aquatic aura.

For the studio shoot we needed underwater plants and seagrass decoration for our backdrop. Or should that be ‘under’drop?!. Cue our talented props and set designer Rianon Thomas. 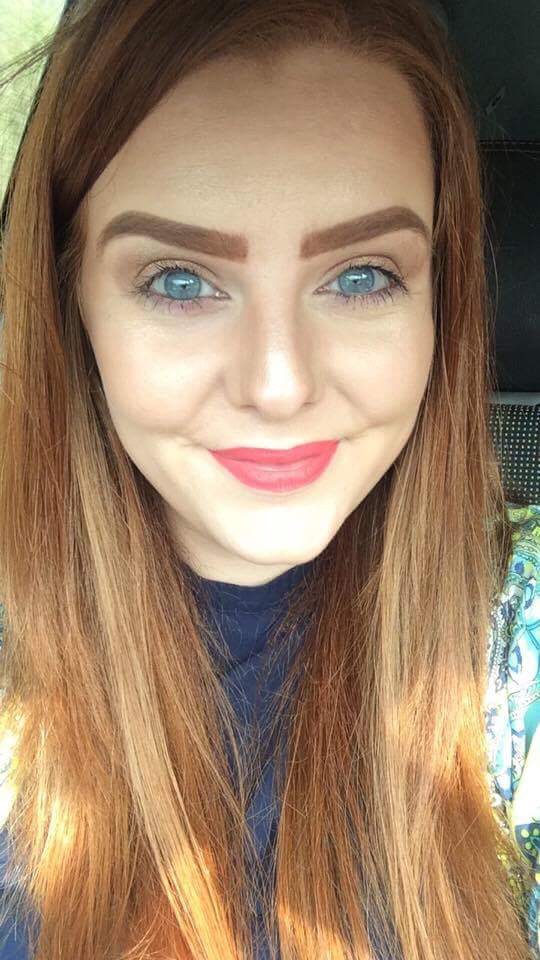 What can I say about this month’s edition!?

Oh my goodness, I absolutely LOVE this issue. I think it's my favourite so far!

When Emma told me the theme was 'Mythical: Mermaid' I couldn't contain my excitement! I channelled my inner Ariel and started researching to create a backdrop befitting a mermaid. No underwater theme would be complete without seaweed and glistening reeds.

I also added strands of green rope and different foliage to create varying depths and textures; with such a spectacular skirt taking centre stage I wanted the background to complement and enhance Emma's stunning outfit.

As Sebastian (the crab in the Little Mermaid) would say "Such wonderful things surround you, What more is you looking' for?"

I’m sure you'll love this issue as much as I do!

Thanks Rianon, this added a beautiful and creative dimension to the shoot. I wonder what amazing creations await me next month?

Nails: Created and painted by Rebecca Clark of Irresistible Beauty. 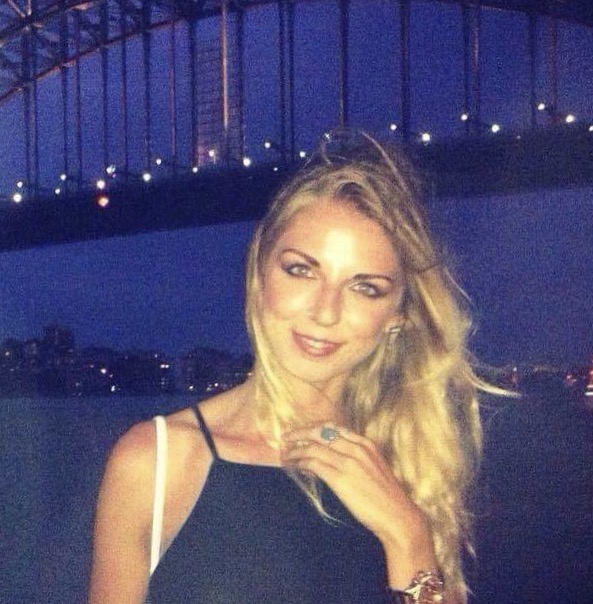 Emma sent me a pic of her amazing skirt a few weeks before so I could get my thinking cap on! I was mesmerised #Swoon

By the time of Emma’s appointment, I'd thought of a few options to grab this little mermaid by the gills! I wanted to mix and match blues and greens. So like an excitable puppy I pulled out 'Bluebell' from the Magpie Glitter range... she was happy. Yay! Alas not the same reaction with the 'Mint Convertible' in Shellac I thought of pairing it with. Thank heavens for having a Plan B to call upon.

And briefly, ever-so-slightly-telling-tales-out-of-school, thankfully the salon was quiet(ish), so no-one got to hear *exactly* what Emma thought of that combination! Let's just say she wasn't a fan! 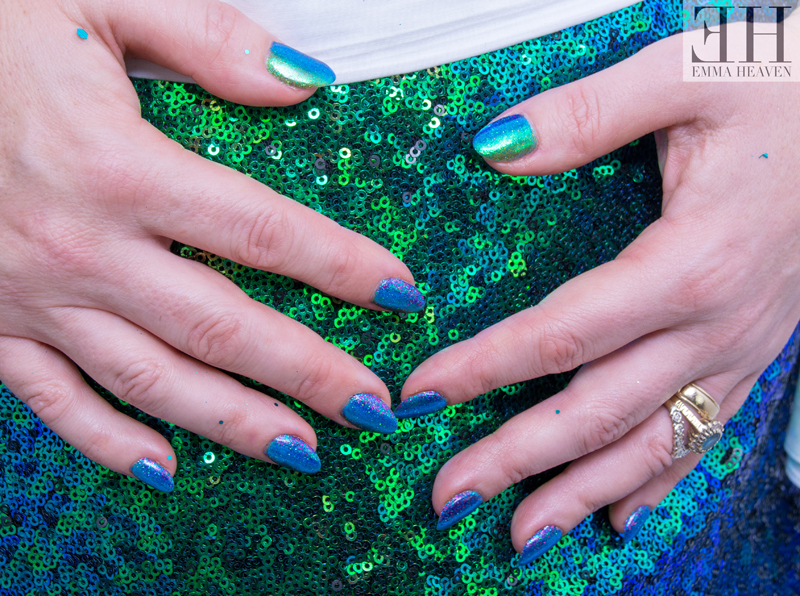 After the giggles had subsided, I come up with these mermaidy, iridescent, ombré bad boys!

After shaping Emma's nails into her signature rounded nails, I base coated before diving into the deep end, by painting on a layer of Shellac’s 'Limeade'. This was followed with vertical stripes, roughly painted onto Limeade, of 'Cerulean Sea' and ‘Video Violet', looking like a hot mess of random colours...until the glittery explosions happened!

I patted on 'Petrol' over the green, 'Bluebell' over the blue and 'Patsy' over the purple. Blended together...BOOM! Mermaid nails!

These are defo going to be featuring in a future holiday nail of mine.

Thank you Rebecca for creating such a mesmerising, mythical, marine-inspired manicure for this mermaid!

Book yourself into the award-winning Irresistible Beauty, Treboeth, Swansea on 01792 773887 to let them work their mani/pedi magic on your nails too.

Hair: Created and styled by Hilary from Pimped Up Pins hair salon.

Here is how Hilary styled my hair into the mythical mermaid look. 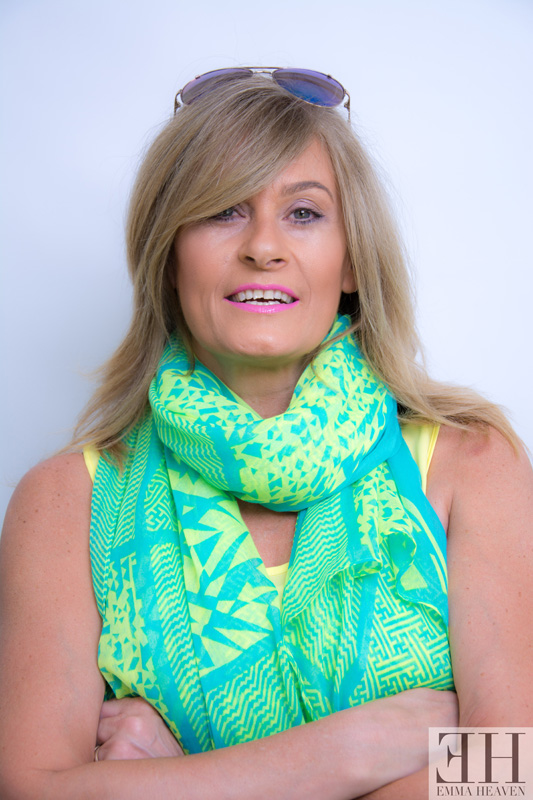 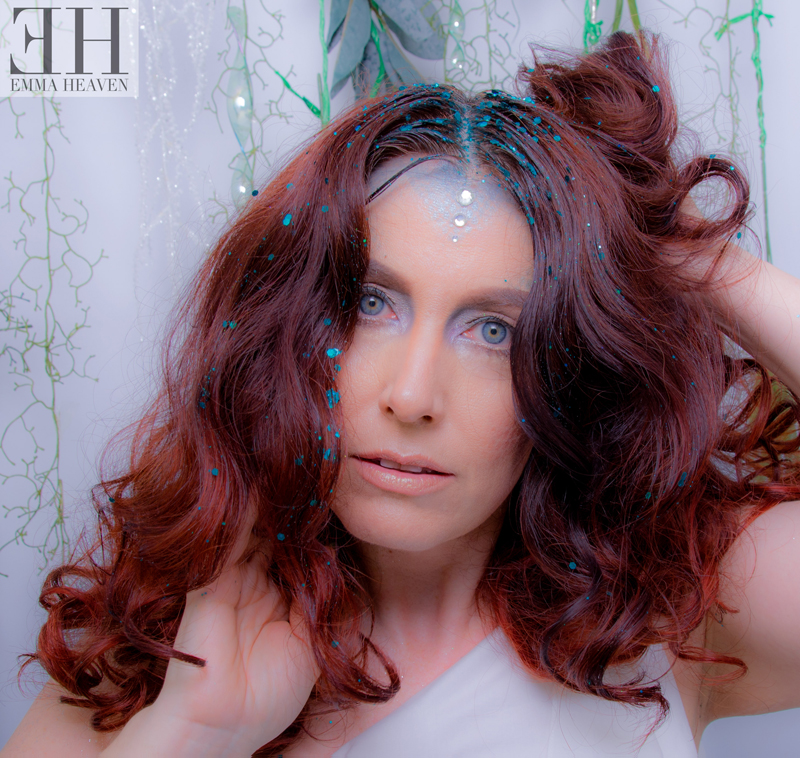 For the mythical mermaid theme this month, I prepped Emma’s hair the night before using large bendy rollers.

I sprayed each section with water and Tigi Volumizing Spray, using a perm paper on the ends, I rolled the hair up to the roots, bending the two ends over to secure in place.

The rollers were left in overnight, creating the most siren-like curls.

I brushed all the curls through, and using a dry putty I pulled out sections to separate the curls.

Star Dust by Beauty Boulevard Cosmic Child glitter was heavily applied to the roots and scattered over the front of the hair to finish Emma’s look. 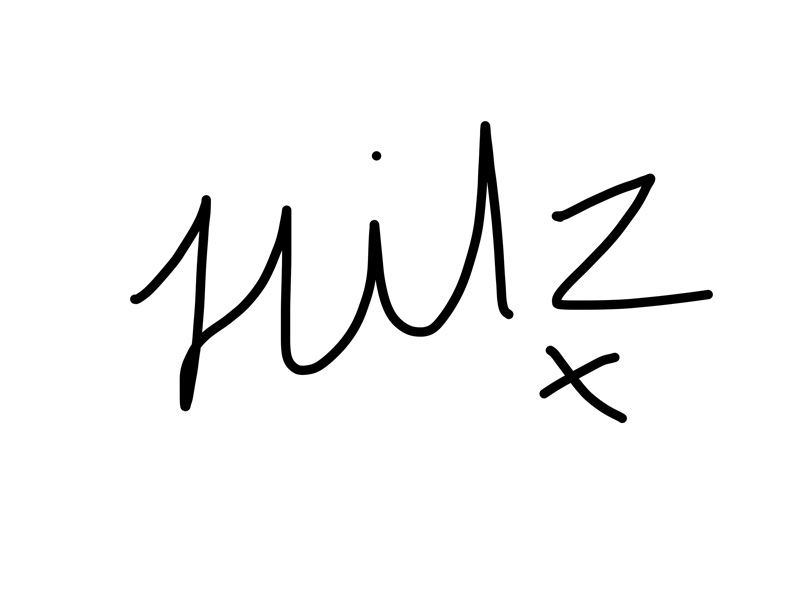 Thanks Hilary for creating the mythical mermaid look. 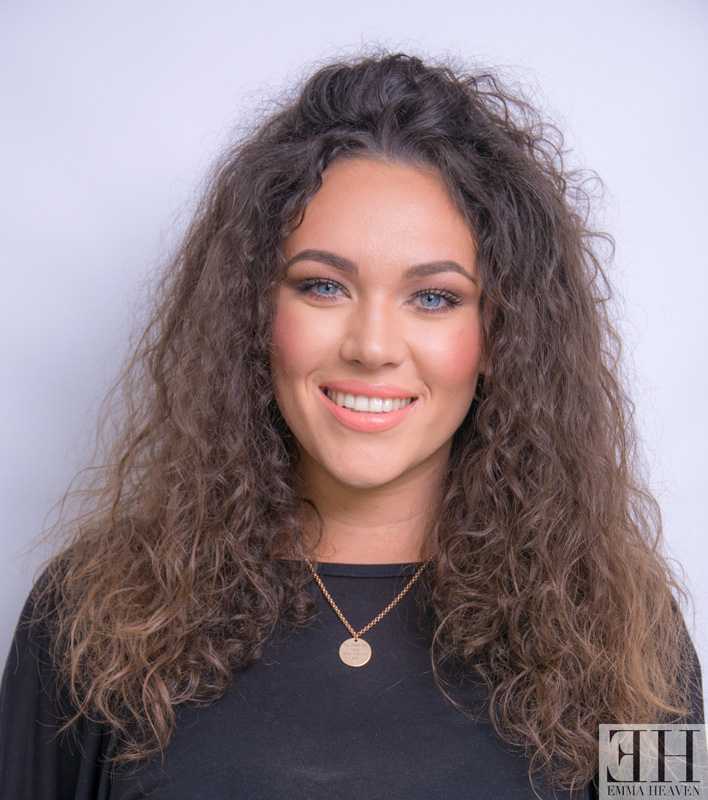 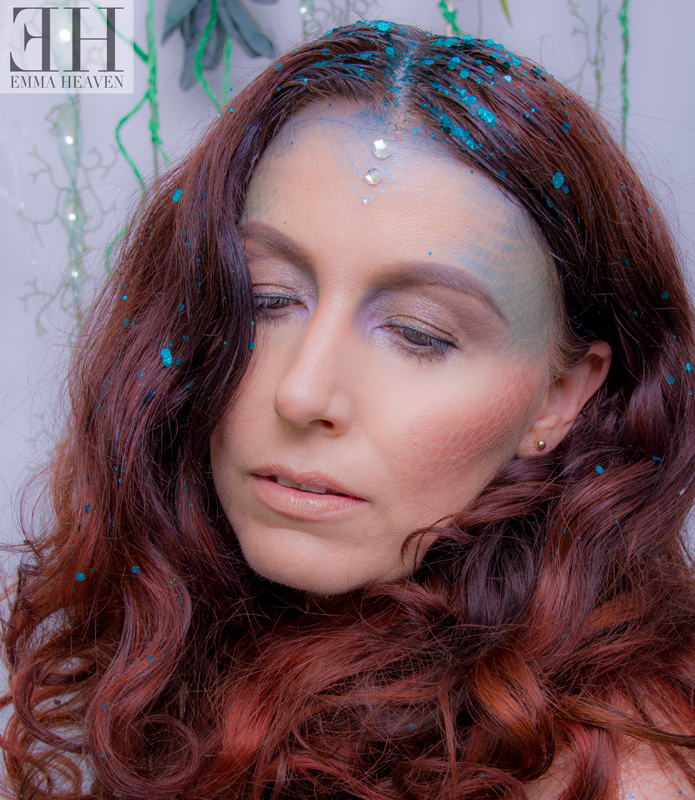 This month saw us turning Emma into my actual childhood dream...

Now we're not talking Ariel (even though I love her) we're talking fantasy glam - more Darryl Hannah’s ‘Madison’ from Splash with a little colour thrown in!

I used Emma's skirt as inspiration for this look’s colour palette... sea colours of blues, greens and teals. I didn't want to make this too fancy dress; so instead of putting these colours on the main features (eyes and lips) I opted to use them for the edges and contours of the face.

Eyes and lips were kept minimal and glowing. I created a simple base of creamy foundations and liquid highlighters before deploying my secret weapon, and every mermaid’s nightmare - fishnets!

Yes that's right... I popped a pair of fishnet tights over Emma's head (not quite bank robber styleee!), resting them gently onto her skin. I buffed and gently patted on the aquamarine colours to the edges of Emma's face through the fishnets...which when removed left a scale-like finish. It was sublime! Oh-so effective but ever so simple!

I added a few rhinestones for sparkle to the centre of Emma's forehead and she was ready for the water!

It was then that the Sebastian impersonations started... 'under da sea...' needless to say, I had a ball!

Thank you Jenna for creating this ethereal mermaid look.

You can find out all about Jenna and her work at jennakellymua.com.

“And now we invite you backstage to see this month’s shoot: Mythical.”

Thank you to everyone on #TeamHeaven involved in the making of this issue’s video.
Your creativity and commitment never ceases to amaze me!

This shoot will forever be legendary at emmaheaven.com. We had t-shirts and hats printed with the ƎH logo and #TeamHeaven from Mantra Design Print for everyone to wear.
Everybody (well all the female #TeamHeaven members) wanted to be a mermaid when the outfit, hair and makeup were complete. I drank my bodyweight in pool water while doing the most unnatural posing ever! And we launched our ‘Dickie’ for the very first time to film all the madness that was unfolding below him!

Don’t be a stranger…