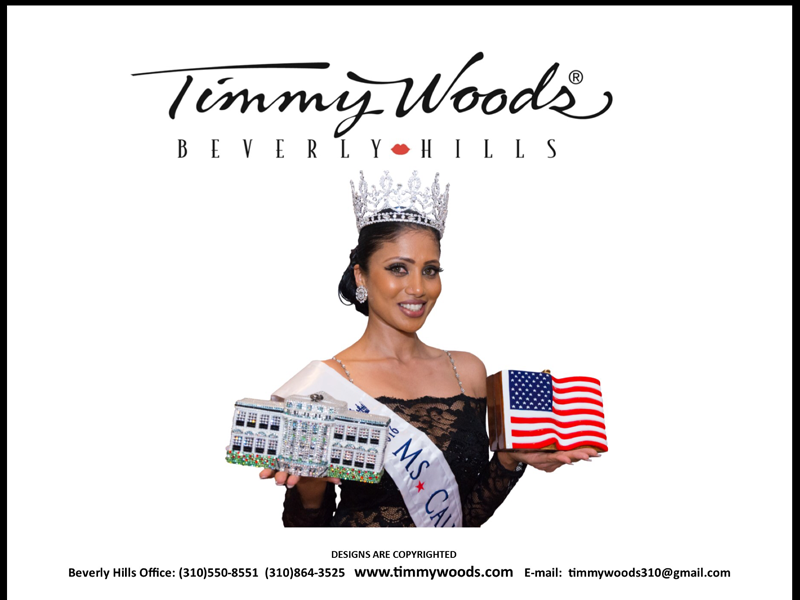 I first heard Timmy Woods’ name like most other fashionistas - when Sarah Jessica Parker toted the Swarovski Crystal-covered Eiffel Tower bag as Carrie Bradshaw in Sex and the City.

That bag was so beautiful. Unique. A visual feast for the eyes. And it started my obsession with these stunning wooden handbags, which shows no signs of slowing down.

So imagine my delight when one day I was online shopping and I discovered a website that had one Timmy Woods handbag left. And - heart stopping moment! - it was in the sale!

I remember my hand shaking as I added it to my shopping cart, hoping it wouldn’t sell out before I reached the checkout.

I paid and patiently waited for the confirmation email. Yet still I waited nervously for the all important dispatch notification, which arrived the following day. And so the excitement started to build as I knew the handbag was finally on its way!

When the parcel arrived I tore through the packaging like a woman possessed. I clearly remember just how breathtaking the handbag looked when I finally got to see and touch it.

Hand carved from acacia wood and with clusters of little wooden beads hanging from both sides of the beautiful carved handle which make a cute jiggling noise as the handbag is carried. It is beautifully lined and hand signed by Timmy on the bottom. It is incredibly smooth to the touch and luxurious to hold. It quite literally is a work of art.

And so my love affair with Timmy Woods handbags was born.

So who is Timmy Woods?

Timmy Woods is a globally renowned premier handbag designer. Her customised and one-of-a-kind wooden and leather handbags have been showcased internationally on television, in print, in select online stores - both major and boutique, and on runways and red carpets. And added to that Timmy has now appeared in an emmaheaven.com photo and video shoot.

The handbag I chose for the shoot was ‘Chrysanthemum’ with Timmy personalising the bag for me by adding Swarovski Crystals to it making it unique to me. It is hard to describe just how unbelievably beautiful and breathtaking the bag is - they say a picture paints a thousand words - so please take a look at the photos on Love It! Rock It! Own It! And watch the video which showcases the handbag in all its stunning glory in Lights...Camera...Action...

Thank you so much Timmy. It is now my favourite handbag and it sits snuggly with the rest of my ever growing, fabulous collection!

While growing up in Beverly Hills, L.A., Timmy was influenced by the glamour of high fashion in cinema. The fashion moguls who created the Hollywood dream became her idols.

Timmy’s formative years exposed her to foreign cultures via the cinema, paving the way for a passionate and international career that not only continues to inspire other designers, but also enables her to help other people.

Although Timmy Woods’ designs are constructed from the precious woods of the Acacia tree, Timmy believes in conservation; and so she ethically sources her materials solely from fallen Acacia trees, and repurposes them into mini-masterpieces of wearable art that become her signature handbags.

I am really lucky to have a handbag which has the same name as me. Oh yes! there is an ‘Emma’ bag made by Timmy Woods which now sits in my personal collection. Sculptured from wood, this gorgeous little handbag is decorated with leather and small beads. It is one of those handbags that just goes with any outfit, and doesn’t look out of place with casual attire or even on the red carpet!

Some of Timmy’s most iconic designs include the musically inspired ‘Red Piano’ which is a dedication to the music of Sir Elton John. ‘White House’ a brand new Swarovski Crystal studded masterpiece inspired by the 2016 race for President! And not forgetting the Swarovski Crystal ‘Eiffel Tower’ bag which will be added to my collection very soon! I think I might even pay Timmy a visit in Beverly Hills to pick this one up in person. I just have to get my husband on board for this (ad)venture as he doesn’t quite understand my obsession for handbags. Just how many handbags does one person need? Well when you see the Timmy Woods Collection you will understand my need to own each and every one of them!

Now that’s one hell of a dream!!!! A fashionista’s dream come true!!!!

You are probably wondering what all the fuss is about. After all, aren’t they’re just handbags?!

Oh no my dear readers! They are so much more than just handbags.

Ladies and gentlemen - I give you the super-talented Timmy Woods... 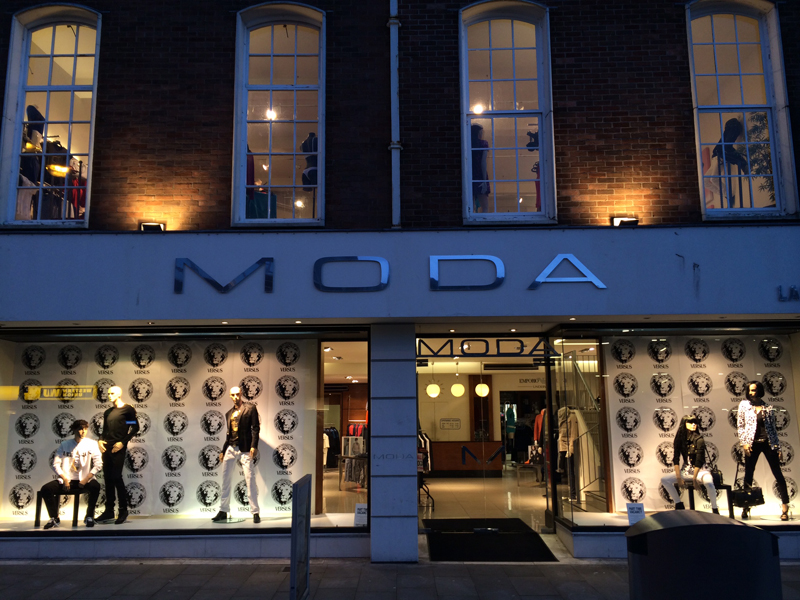 When deciding on a name for his new shop, Richard Jones wanted something short and catchy.

He narrowed it down to two - Moda and Vida. In Italian, Vida means life; and Moda means fashion. So Richard chose Moda.

Richard is charming, sophisticated and a true gentleman. His stepping stone into retail fashion came via Rowberry’s Fashion shop in Swansea, which was the family business. In 1991 Richard made the decision to go it alone, opening his first shop RC (Rowberry Casuals) in The Picton Arcade, Swansea.

In 2005 Richard found the perfect property on The Kingsway, Swansea, previously the old Yorkshire Building Society with beautiful windows and architecture.

Richard could see the potential of turning it into a magnificent fashion store, so his next big project to create a men and women’s fashion emporium was underway.

The building was completely renovated and refurbished. Just several months later Moda was ready to be stocked with lots of designer brands.
Richard says it is extremely hard to become a designer brand stockist and that he pursued the representative from Ralph Lauren for six months to be able to stock the brand - even inviting him to Swansea to see the store and the city centre.

His determination paid off. With Ralph Lauren on board lots of other designer brands quickly followed; and now all these brands are exclusive to Moda, Swansea.

The first year of trading for Moda exceeded Richard’s expectations and business was going well, until the controversial one way system was put in place on Swansea’s The Kingsway, this Richard says, devastated local business. The upheaval of the city centre caused a terrible commotion and stopped people coming into town to shop.

Slowly the city returned to normal - and soon the shoppers came back!

With business growing again, Richard decided to open a small restaurant within the building and named it M Bar.

It is a chic, modern restaurant and is fully licensed, which compliments the whole store, making it a great shopping destination.

Richard loves to host fashion shows, the majority of which benefit charitable causes, which is great for the local community.

I have been to many of Richard’s shows. They are a very professional affair, with champagne and canapes constantly served by waiters in fabulous surroundings, while either a DJ or an artist performs live while the models showcase the store’s latest fashion ranges. Definitely an event not to be missed.

Richard’s biggest fashion show was held at Oceana Nightclub, Swansea with ‘Only Men Aloud opening the show to over 900 people. An incredible event which Richard hopes to replicate again - maybe next year!

Moda is always attracting new brands and I did manage to get him to divulge one of them to me - from this summer Moda will be stocking Moschino! Alas no amount of arm twisting would persuade him to tell me any more!

So what is next for Richard? He is working on a major project, which is well and truly under wraps and he is keeping his cards very close to his chest!

Richard tells me of a fabulous quote from Winston Churchill: “Find a job you love and you’ll never have to work another day in your life”. This is so true. Richard loves fashion and working in retail with high end designers.

Richard used to play field hockey for Wales and was capped 57 times. At the age of 30 he gave it up as he says he thought “it was about time he did some work”. Playing hockey was a major achievement for him and is something he always wanted to do, producing some of the proudest moments in his life.

Opening Moda is another of Richard’s proudest moments. To open the doors and see the results from all his hard work is a huge achievement.

The shop is beautiful and it stands out. If you picked it up and put it in London it wouldn’t look out of place there, which is what Richard had in mind when the store was designed.

Inside the store is a fashion shopper’s paradise. Everything is displayed beautifully and accessible. The staff are a delight and are very knowledgeable and helpful.

Richard is passionate about supporting local independent businesses and seeing the city grow. We can all help to ‘shop local’ and ‘support local’ to keep the city centre thriving.

Moda is a destination shop = somewhere you are going to get fabulous quality and cutting-edge fashion, shown to you by friendly staff. And when you’re all shopped out, you can unwind with a drink and enjoy a delicious meal in the relaxing surroundings of M Bar.