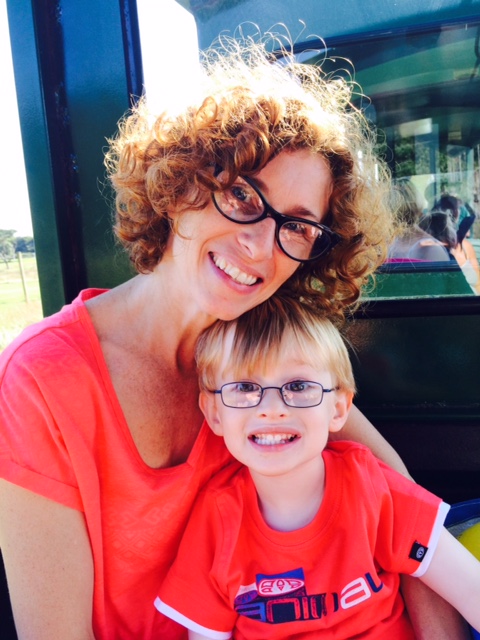 Carolyn Gammon lives in Port Talbot, South Wales with her partner Gos and her two young children, Rudy and Mira.

In September 2015, Carolyn was thrilled to discover she was pregnant with her second child. However, six weeks later she went to see her GP as she noticed changes in her left breast.

After being given an ultrasound scan and a biopsy and now 16 weeks pregnant, Carolyn was given the terrible news that she had a 5.6cm cancerous tumour. As she was beyond her first trimester she was able to have chemotherapy to shrink the tumour, and when the baby was born she would need surgery to remove it. 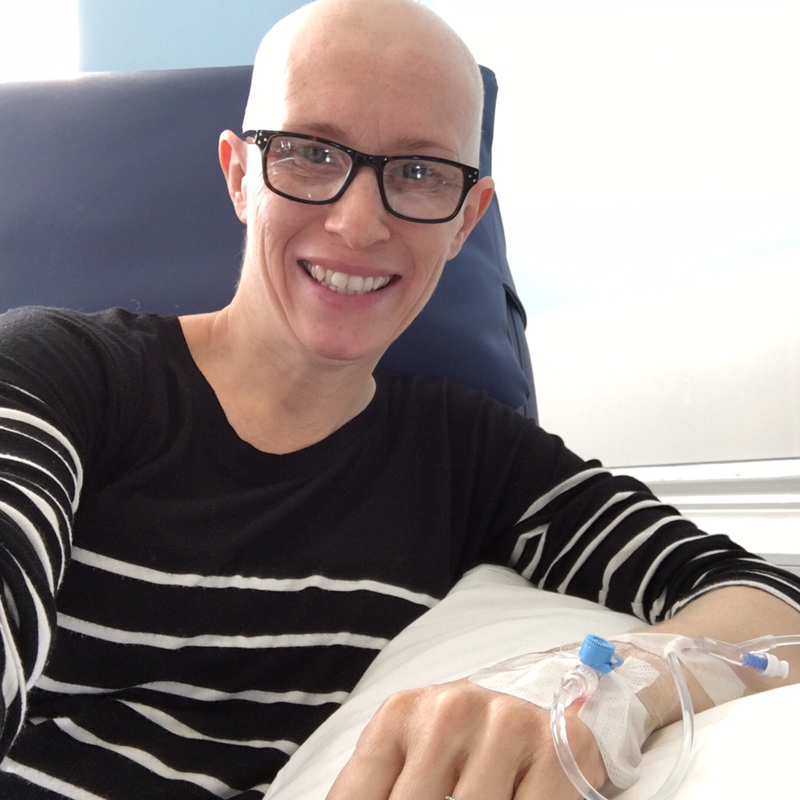 Carolyn started her first cycle of chemotherapy in December and finished it in March this year. On April 29th her beautiful daughter Mira was delivered by Caesarean section.

Now that Mira had safely entered the world, Carolyn was able to have a CT scan and a mastectomy. The pathology results were very encouraging - the surgery had got rid of all evidence of cancer in the breast and lymph nodes.

Carolyn started to believe she had this beaten until the scan results showed some suspicious areas on her liver and left lung which needed an MRI scan for further investigation.

On 23rd June, her oncologist told her that the MRI confirmed that these areas were cancerous and that she now had secondary (terminal) cancer. Carolyn’s world imploded. 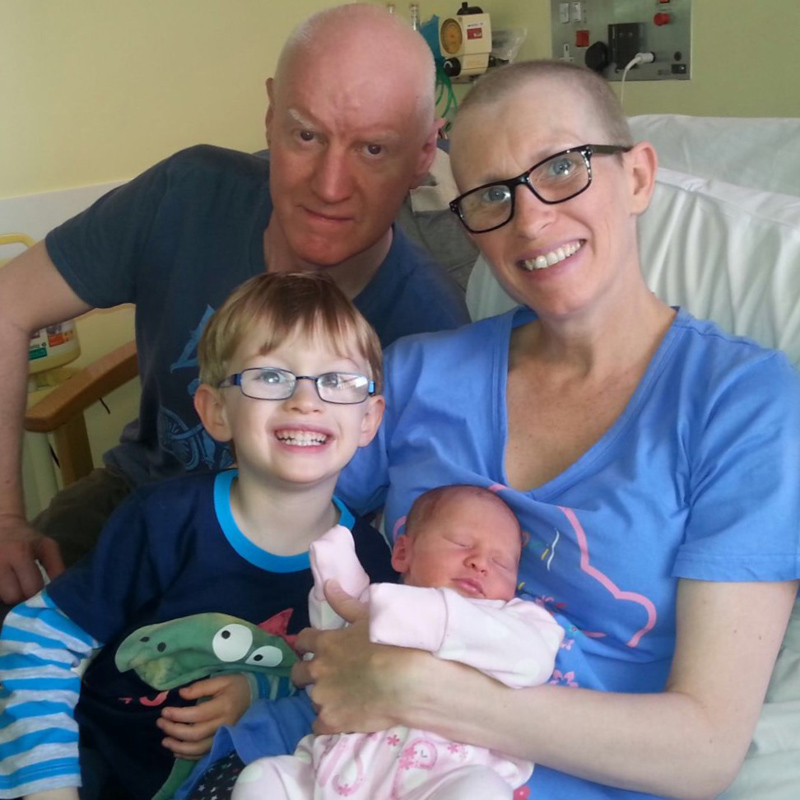 Secondary cancer is not curable, but is treatable. Carolyn’s cancer is HER2 positive, which means there are targeted drugs that can stop it growing and spreading. Carolyn is currently on Herceptin which has so far stopped her cancer from progressing. However at some point this drug will stop working and this could happen within months or years. Unfortunately nobody knows the answer to that.

There are other types of drugs that have proven to be very effective in treating Carolyn’s cancer (TDM1 and Pertuzumab) but these are not routinely available on the NHS in Wales. You can apply for these drugs but it is highly likely Carolyn’s application will be rejected. Although Carolyn could appeal the decision, time is a luxury she doesn’t have - so she is trying to raise the funds herself. 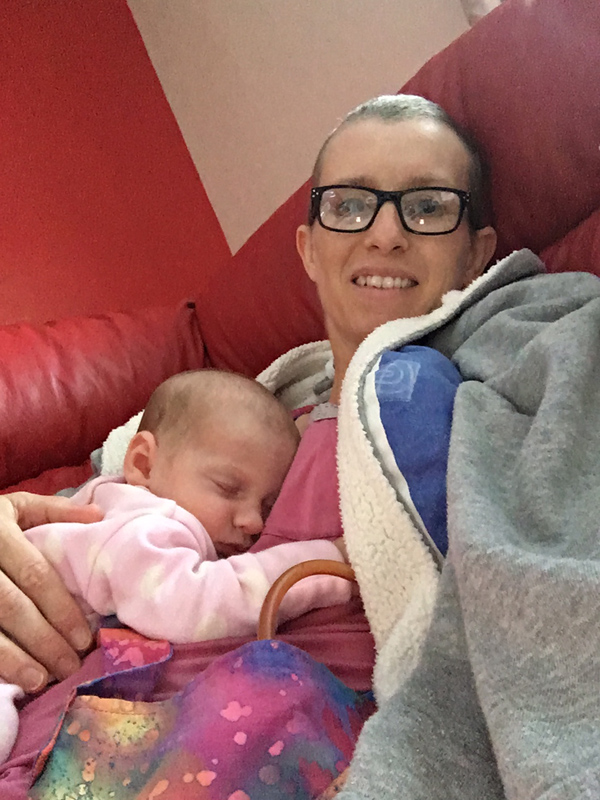 This incredible brave woman and her emotional story really touched me. And then I met the lady herself...

Carolyn told me about her story in detail - her journey so far; and then explained the complicated funding process of cancer drugs in Wales which to me sounds frustrating and completely bonkers!!! But Carolyn is a very practical thinking woman; she is very accepting and understanding of the funding situation. Although she did say her initial anger was directed towards the pharmaceutical companies who manufacture these high cost drugs, but their argument is and always has been that it takes decades of research and developmental work to produce these drugs. And so Carolyn accepts that as she endeavors to raise the money needed. 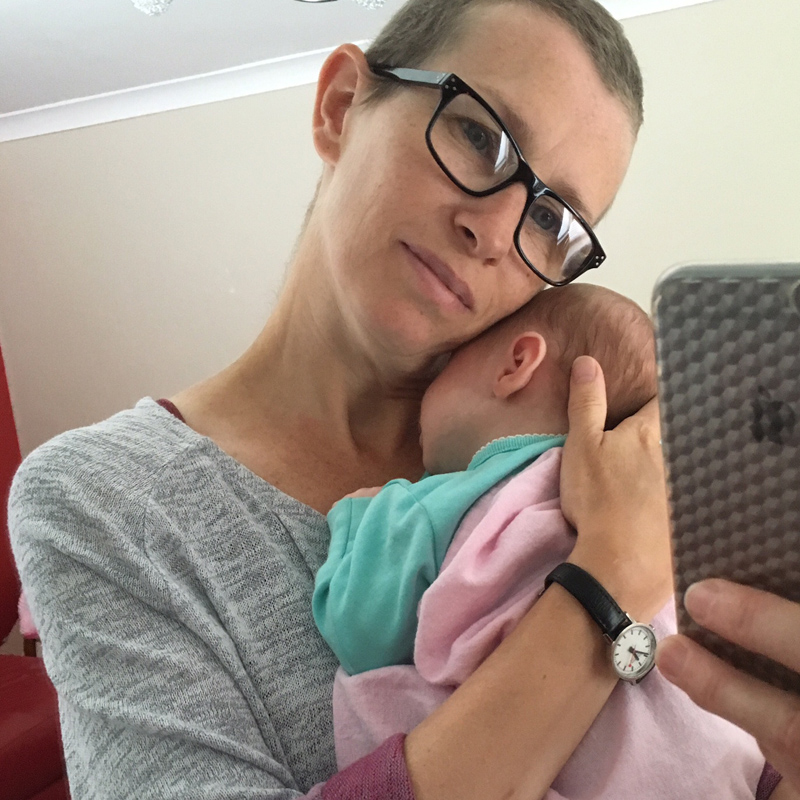 She patiently told me that cancer is a very complex, multifaceted disease - it isn’t just one disease where this is the condition and this is how it behaves - people respond to different types of cancer in different ways. You could have the same type of cancer as someone else - but how your body responds to it is totally different to how another person’s will respond to it. There are many variables involved and it’s just not that simple. 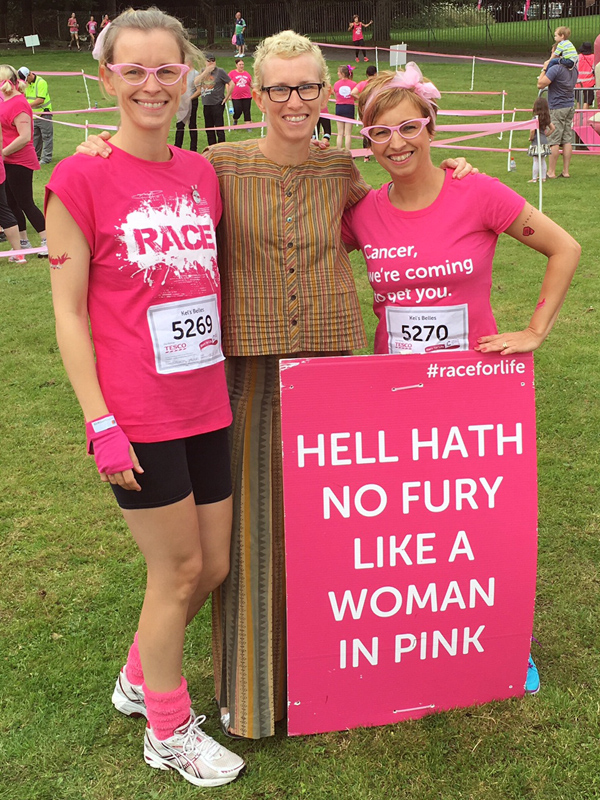 Carolyn was unable to have a detailed scan while she was pregnant, just a basic ultrasound scan and mammogram and an X-ray, which didn’t show up anything on her liver or lungs as the tumours were so small, it just showed up the tumour in her breast. As soon as the baby was born, she had a mastectomy and her secondary diagnosis. From beginning to end much has happened in just 10 short months: finding out she was pregnant in September; diagnosis in November; chemotherapy from December to March; baby born in April; mastectomy in May; and a secondary diagnosis in June. The most shocking thing for Carolyn and her family was not the diagnosis, she says:

“Everybody thinks the diagnosis is the worst part but in the weeks leading up to it - I knew that there was something definitely wrong - so when they told me I wasn’t really shocked. I was quite pragmatic about it. My fear was that they were going to say - it’s really big, it’s really bad, we’re going to do what we can but we can’t do much. What they did say was it’s this size, it’s this type of cancer and this is what we’re going to do. It was very straightforward and so when I left there I felt more relieved than anything as I was thinking worse case scenario it couldn’t be cured. At the time I didn’t really understand what the diagnosis meant - I didn’t know that it was the secondary cancer that kills you. The primary breast cancer had been removed and contained but when it spreads that’s when it becomes incurable. When I had my diagnosis I knew it was bad but I didn’t realise the prognosis was bad until I started to look into it more. But I wanted to know more about what I was dealing with. And although it was a massive shock, reading statistics, I like to know what I’m dealing with. 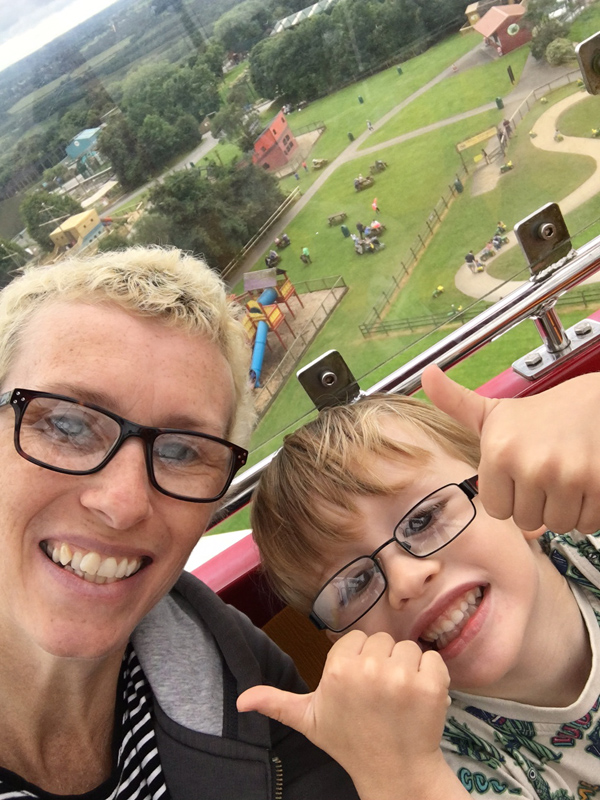 The first couple of weeks we were in bits, trying to take it all in while not showing our distress to the kids and trying not to cry in front of them. Then we had the heartbreaking task of trying to explain this all to the family. I didn’t fully understand it all myself but I then had to explain to my family that really I would be lucky to have five years who were understandably shocked and upset. For me that has been the worst part - explaining to my loved ones that my cancer is treatable but not curable - not losing my breast or my hair.

At that point when I was told it was not curable - that was the first point in the entire process when I felt hopeless. Up until then I was like - well ok they’re going to stick some toxic chemicals in me - chop my boob off and give me radiation - I didn’t care what they were going to do - as long as they were doing it because they’re going to cure me. I’d never even thought of the word cure - but after my mastectomy when they did the pathology on what they’d removed - they had started to say hopefully it will be cured. The plan was then Herceptin for a year, possible radiotherapy and that was that. I knew I’d have to have check ups - but never in a million years was expecting three weeks later to be told it’s already gone elsewhere! I wanted to know how it had spread and was told it was metastatic cancer - it had spread through the blood or lymph system and formed new tumours.

I have a scan every three months and each time I go I could be told that the drugs I’m on are no longer working and I need to go onto the drugs that are not funded. That’s when I’m going to need the money to start the treatment. Some of these drugs are keeping people alive for years five, six, seven years, maybe more and hopefully that will happen for me so it will get my children to an age where they will know who I was and have memories of me. If the drugs give me five more years, that will make a massive difference to my children and is the driving force for this whole campaign - it isn’t about me being here longer - it’s about their mother being here longer.” 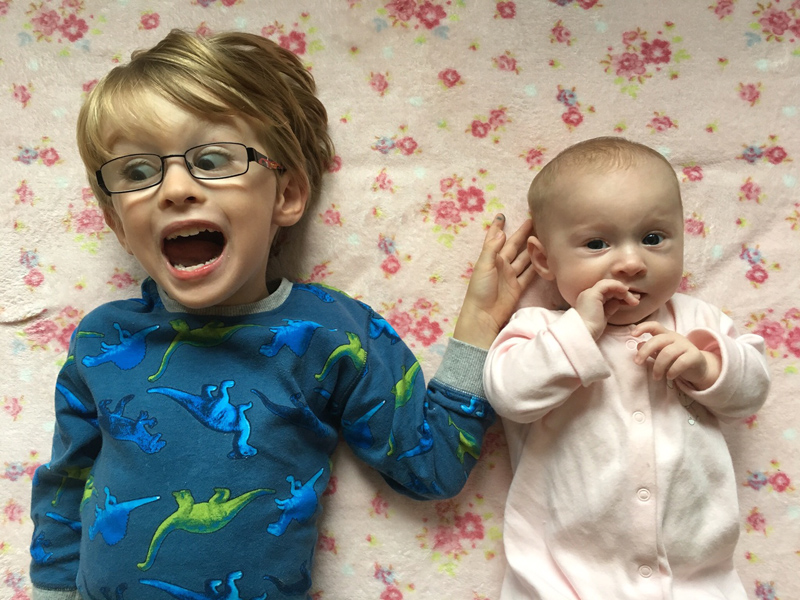 Carolyn’s family try and live life as normally as possible - enjoying things together like holidays and day trips - making memories. But always in the background is the fear that the next scan could be the one that shows the current drugs are no longer working and the fundraising will be more important than ever.

“Sometimes I feel like we are in denial and I’m waiting for it to really hit me. I don’t really feel anger at the cancer or even the fundraising issues and feel quite philosophical about it all - like I should be telling myself - this is really bad. It feels like an out of body experience - your life has unbelievably changed from one day to the next - your life is turned upside down.

My future is unpredictable and I’m fighting to stay alive so that my children will be old enough to have memories of me. I’ve worried about how my partner will cope with two small children when I’m gone and everything he will have to deal with - silly things like - how will he help them with their homework as he’s visually impaired, and how will he comfort them when they call for me in the night - but I’m still here for them now and I have wonderful family and friends who support me, so I’m going to keep fighting, make memories and take each day as it comes.”

To help support this wonderful, brave and inspirational woman please visit her Go Fund Me page:
https://www.gofundme.com/curlycarsfund and you can follow and help with her fundraising efforts on Facebook. Plus we’ll keep you updated here on emmaheaven.com.