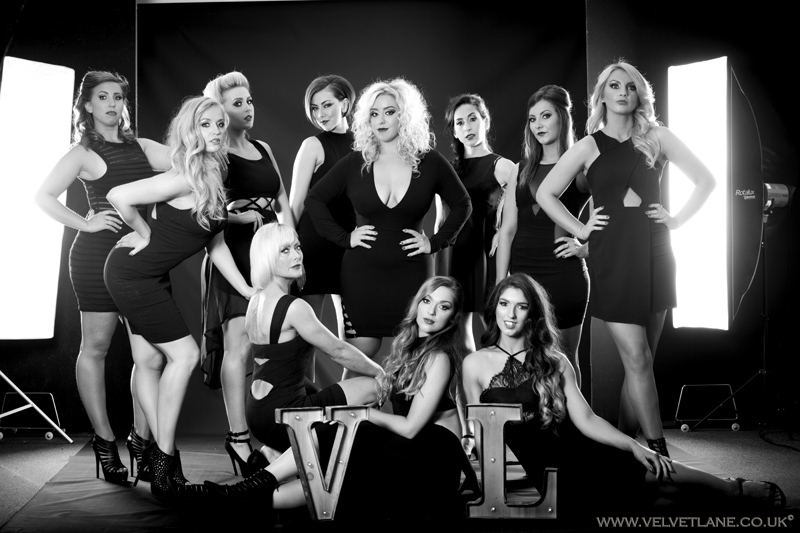 Velvet Lane is the creation of Kathryn Lane and Tara Piontecki who met just three years ago when Kathryn attended one of Tara’s dance classes. Over time they built up a great friendship, but one thing that stood out for both of them was how much they missed the performing element of dance.

This lead to them doing the rounds of the nightclubs in Swansea, where they would perform a few numbers. Swiftly gaining in popularity and a fan base made them realise that they could actually make a great business out of this.

After playing around with different names they came up with Velvet Lane, which includes Kathryn’s surname - she was unsure to start off with, but, as Tara pointed out, you can’t really put Piontecki with anything! Thus the very evocative and provocative Velvet Lane was born, conjuring up thoughts of luxury, class and being sultry. 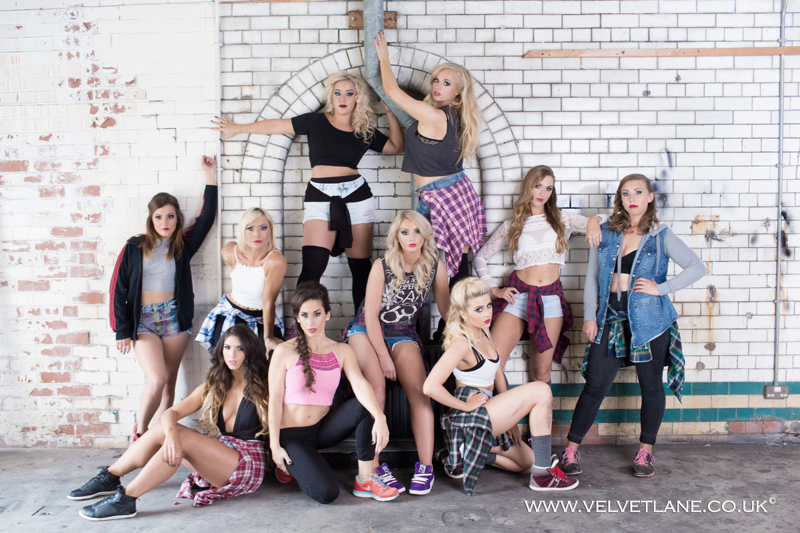 Now that they had a vision it was time to recruit members. Auditions were held; word soon spread, and dancers sought them out. They are always on the lookout for talented new members, hosting several auditions a year. So if you want to become a Velvet Laner get your shimmy on and contact them via velvetlane.co.uk.

“The company was born through a passion of dance. Once you’ve danced and performed, as any dancer knows it’s just in your blood, so it’s great that through this combined love of dance, Velvet Lane was created and it’s just grown and grown. 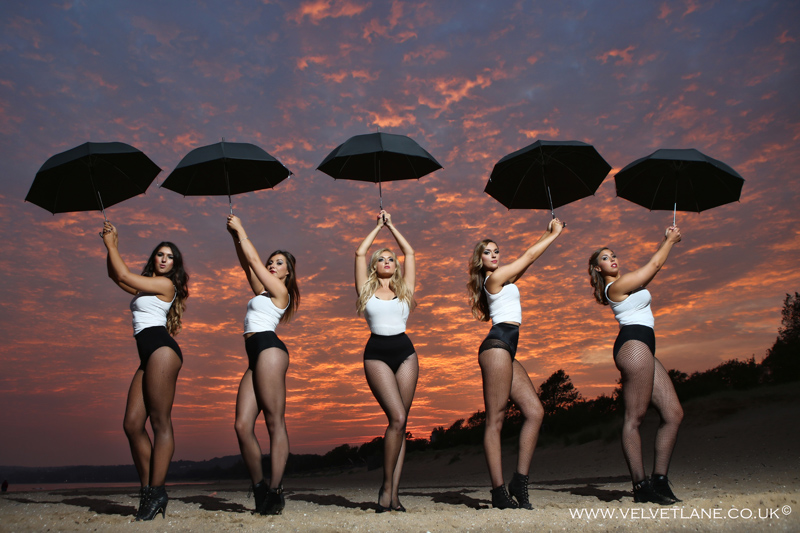 We are proud to be an all female dance company with a mixture of ages, shapes and sizes. We celebrate being women, our own sexuality, embracing our femininity and our uniqueness as individuals. We want to empower and inspire women everywhere - every single woman is beautiful, sexy and has female power! Embrace it and know your worth. Who runs the world? GIRLS (Queen Bey).

Our girls are absolutely awesome and we couldn’t have got this far without them. They are professional dancers who have danced across the globe, on Broadway and the West End and we are very lucky to work with them.

We are so grateful for their passion, dedication, enthusiasm and of course talent. We really are a group of ‘girls’ girls’ and have become great friends.” 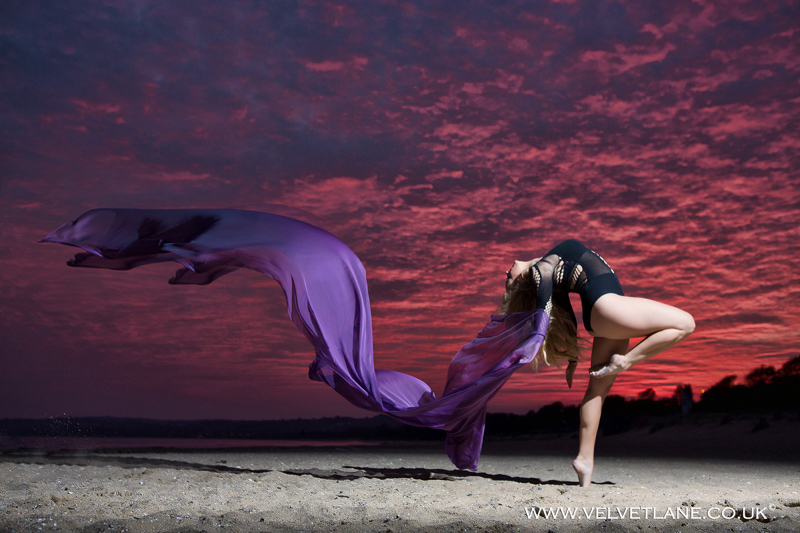 Velvet Lane have been involved in many big events in Swansea, including The Wave and Swansea Sound radio station events, sharing the stage with The Voice singer Jermaine Jackman and Britain’s Got Talent’s Collabro.

I ask Kathryn to share some of the highlights of Velvet Lane’s journey so far. “One highlight would be the photoshoot and the beach shot. It was the end of October... we wanted a beach shoot and we were expecting it to rain. But I think the angels were watching over us, as it was really warm and just the most beautiful day. We had just a short time left of the shoot and the beach was the last location... the sun was setting, creating the most beautiful sky and we took two amazing photos in minutes, catching the sun go down. We couldn’t have planned those photos and I love them because they capture what we as a company are about; and also the stunning Gower coastline that we are blessed with.

Oh and of course another highlight is being featured on emmaheaven.com.” (Naturally!)

Yes, the Brazilian Carnival shoot was amazing. A visual feast for the eyes. The girls looked incredible in their carnival head dresses and their teeny tiny skirts - and when they started to samba - well WOW - what can I say? They are talented, sexy and fabulous - absolutely everything I wanted them to be. They are hard working, professional, lots of fun and their enthusiasm is contagious.

It was very apt that the song I chose for the video was ‘Spice Up Your Life’ by The Spice Girls. The song just exudes fun, madness, party, colour, glamour, sexiness and most importantly - Girl Power!

Ladies - it was an absolute blast having you be part of this incredible photo shoot and video. And you too can be as mesmerised as I was by their performance in Lights...Camera...Action... 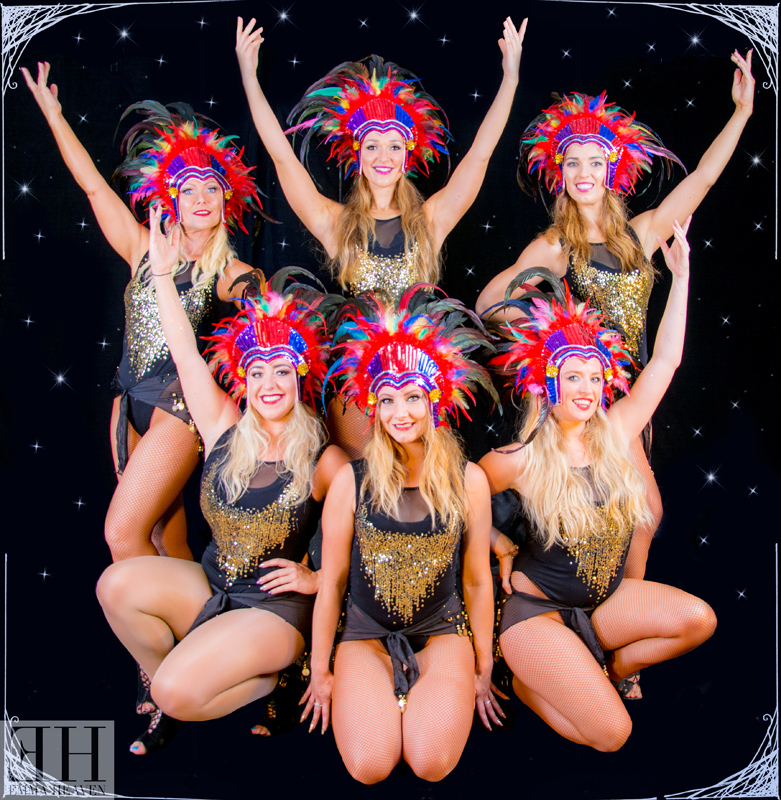 What I love about Velvet Lane is that they, like me, think big AND dream big! When I asked what they want to achieve the answer is short, sweet and straight to the point - WORLD DOMINATION! Always my answer as well!

They want to grow Velvet Lane all over the UK and beyond. Increasing the products they offer and to become a household name within the entertainment industry.

They already have a few things up their sleeve with some big plans in the pipeline. Plus they will be setting up their own dance studios and performance venue in Swansea - so watch this space...

What an amazing achievement from two friends - Tara and Kathryn - who share the same creative vision and ideas. They just clicked and work so well together. They both say that Tara is very ‘chilled’ and laidback - definitely the ‘man’ of the relationship (selective memory and hearing when she chooses...!); and Kathryn is the woman (overreacts, sensitive and remembers everything!). The perfect marriage!

Ladies - you deserve all the success you get - and you have most certainly converted me into a ‘Velveteer’. 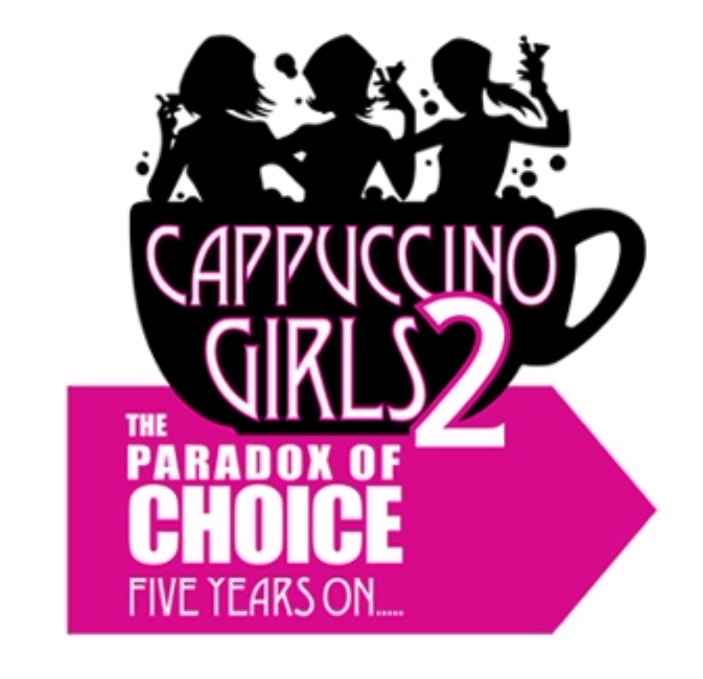 In the March 2016 issue of emmaheaven.com, I told you all about the wonderful musical Cappuccino Girls, which was staged at Coast Italia, Swansea.

The musical captivated me in more ways than one. Not only was it uplifting with the fabulous music, it really struck a chord with me as one of the characters - Hillary - was trying to get her magazine off the ground. Art imitating life? I just sat there thinking - wow - she could be me! The similarities were staggering.

At the end of that feature, I left you with the promise that Cappuccino Girls 2 would be launching this summer. The highly anticipated follow up - Cappuccino Girls 2: The Paradox of Choice - opens Friday July 29th 2016 at the Theatre Ffwrnes, Llanelli with a run of 12 shows until Saturday 6 August.

With my excitement brewing I met up with the fabulous Claire Hanney who stars in the show as my favourite character - Hillary.

So take it away Claire... 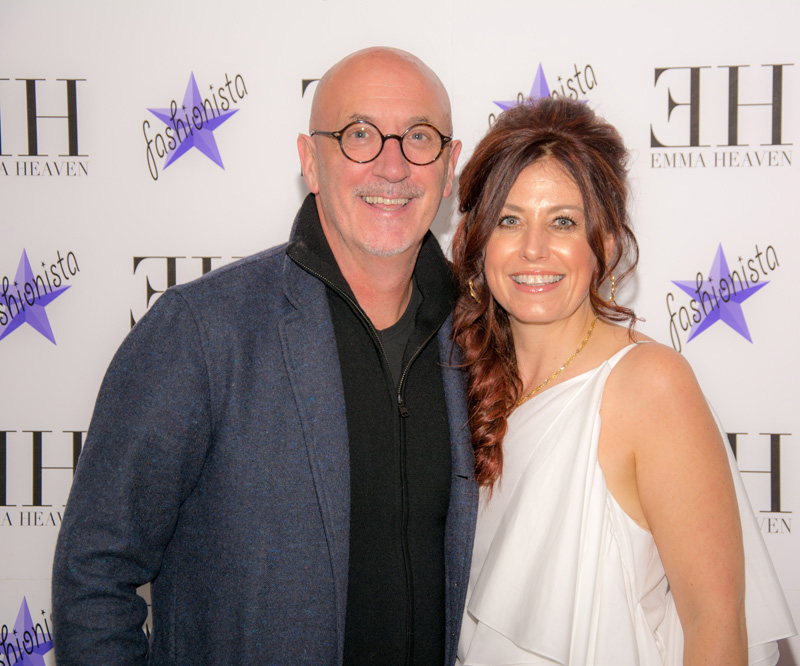 “The inspiration for Cappuccino Girls 2 is the inevitable ‘What happened next? Did the characters get their ‘happy ever after’?’ ’Sometimes there’s nothing worse than having all your dreams come true.’

It’s five years since the end of the first Cappuccino Girls’ musical and so much has changed. Hillary is a successful editor, Connie a successful business woman and Hetty owns a nationwide chain of cafes. Sometimes success is harder to deal with than failure. Is their friendship strong enough to get them through when they find that ‘happy ever after’ might only be a fairytale ending?

The story is about the strength in women and a need to fight for things, as these are not handed to women on a plate.

The story will resonate with women everywhere, through the show’s three main female characters. 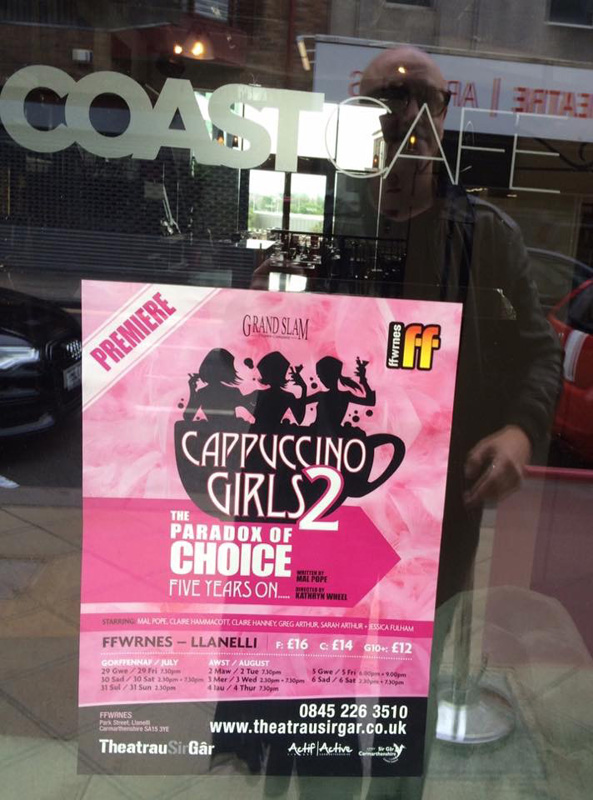 Hillary: returning to work, having been a stay at home mum for many years.
Connie: husband Richard was diagnosed with cancer; he’s now on the mend. How will their relationship develop?
Hettie: inherited lots of money - does it buy you everything?

We get to see the complex journey these women undertake, and how it changes them and their relationships. And do they regret the choices they made?

When Mal wrote the story it was essential that it would not only hold up on its own as a musical, but that you needn’t have seen the first Cappuccino Girls to be able to understand the second.

Mal is a perfectionist and is still making changes during rehearsals in order to deliver the perfect show. As we live and breathe our characters we’re able to say “Mal, Hettie would say this” or “Connie would never do that”. We just know what feels right to get the best out of our characters and so we adapt in order to create a gripping story.”

The musical is called Cappuccino Girls 2: A Paradox Of Choice - a strange yet intriguing title. Claire told me to Google Barry Schwartz’s book ‘The Paradox of Choice - Why More Is Less’. He opens by saying that people think that, the more choice they have the more freedom they have. He questions this. We now have an explosion of choice - but is it too much? Perhaps we now have too much choice, which becomes confusing. Decisions need to be made. Life is a matter of choice and the question is, ‘Is this good news or bad news?’ And the answer is YES! All this choice has two negative effects: 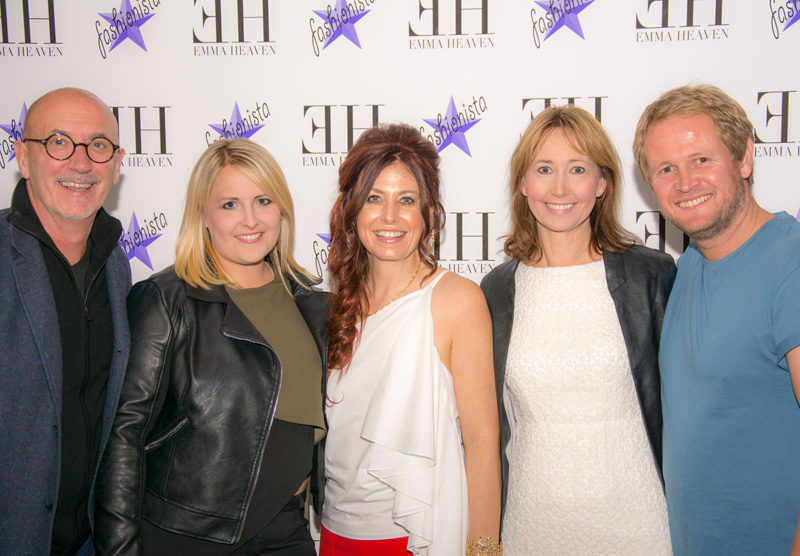 Did you make the right choice?
Could you have made a better choice?
Do you regret your choice?

Mal takes this dilemma and makes it the wheel at the centre of the story. What decision(s) did the Cappuccino Girls make? Did they make the right choices? Could they have made better choices? And do they regret the choices they made?

So many choices. So many questions.

Thankfully not long to wait until all is revealed.

The cast are truly talented and inspiring. If I listed all their achievements they would run into several more issues. So I’m just going to share with you some highlights.

Mal Pope:
Creator of Cappuccino Girls.
Written songs for Cliff Richard and The Hollies.
Duetted with Elton John.
BAFTA award-winning music show ‘The Mal Pope Show’.
Feature Documentary about Swansea City Football Club’s ‘rags to riches’ rise from the lower leagues, to the Premier League, ‘Jack to a King’.
Mal is an inspiration and an incredible Ambassador for Swansea.

Sarah Arthur:
Theatre Credits: The King and I, Oliver Twist, Footloose, Jesus Christ Superstar.
Film: Night Watching.
As well as being on the stage and co-founder of Footlight Productions with her husband Greg Arthur, Sarah does costume and makeup design, where she is co-owner of a theatrical costume hire company ‘Behind The Seams’.

Claire Hammacott:
Claire began her career with Opera North touring the production La Gioconda.
She joined the cast of Phantom of the Opera, understudying and playing the role of Carlotta.
From there she joined the cast of Les Miserables, in London’s West End, before fulfilling a lifelong dream where she played the lead role of Christine in Andrew Lloyd Webber’s Phantom of the Opera in the West End.

Claire Hanney:
Claire has been treading the boards for four decades, making her debut in 1981 in a production of Gilbert & Sullivan’s opera, The Mikado.
Theatre Credits: My Fair Lady, Carousel, Oklahoma, Pirates of Penzance.
Amateur dramatics is a huge part of Claire’s life where she can pursue her passion and perform on stage. 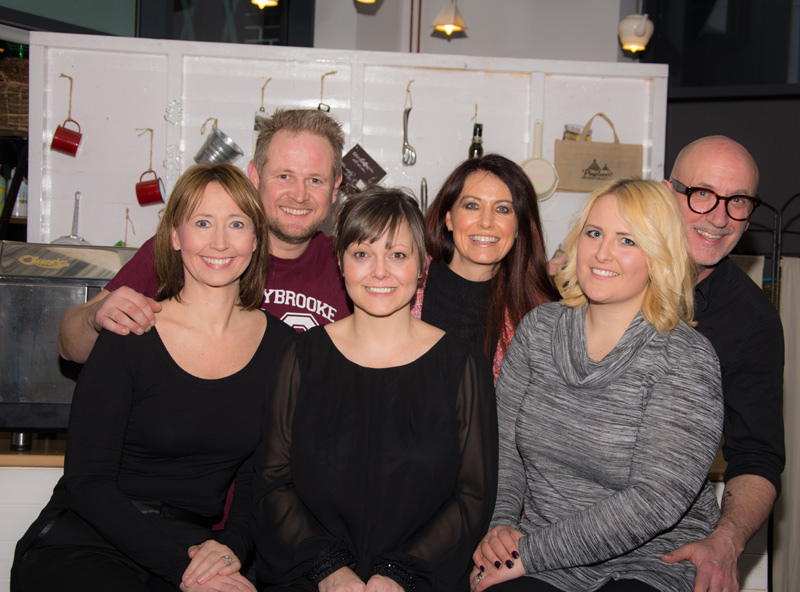 I am fortunate enough to have met this incredible group of actors. Their passion is infectious and their talent is inspiring. They give their absolute all to make this show special and memorable.

Claire wouldn’t reveal much about the new show. However I do know that they have a song called ‘Stitch a Bitch’! CSB is that about you?! Wow! How much more like Hillary could I be?!

My excitement is building in anticipation of seeing this fabulous show and following the next instalment of the Cappuccino Girls’ lives. I have my tickets at the ready already! Do you have yours?

Don’t be left decaffeinated or disappointed! To buy your tickets, head on over to cappuccinogirls.malpope.com - it couldn’t be easier, and your seats will be guaranteed faster than you can say cappuccino or macchiato!